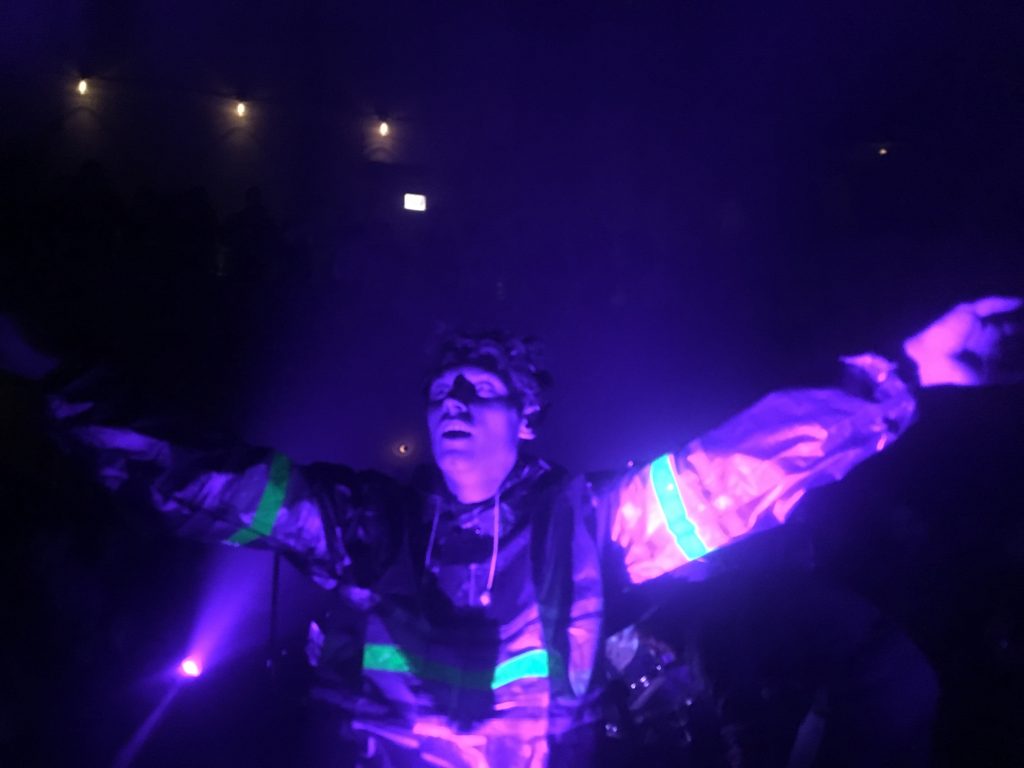 “Sunday night! Up all night! Red wine in my blood tonight!”

This was the mantra of Grapetooth’s album release show on Nov. 11 at Thalia Hall In the Round. Having just dropped their self-titled debut record two days before, the concert’s sold-out status was quite impressive – though not surprising.

Grapetooth is a Chicago duo consisting of Clay Frankel (of Twin Peaks fame) and Chris Bailoni (also known as producer Home-Sick). Their New Wave-inspired sound harkens back to 80s pacemakers such as The Cure and New Order, resulting in infectiously danceable synth melodies. 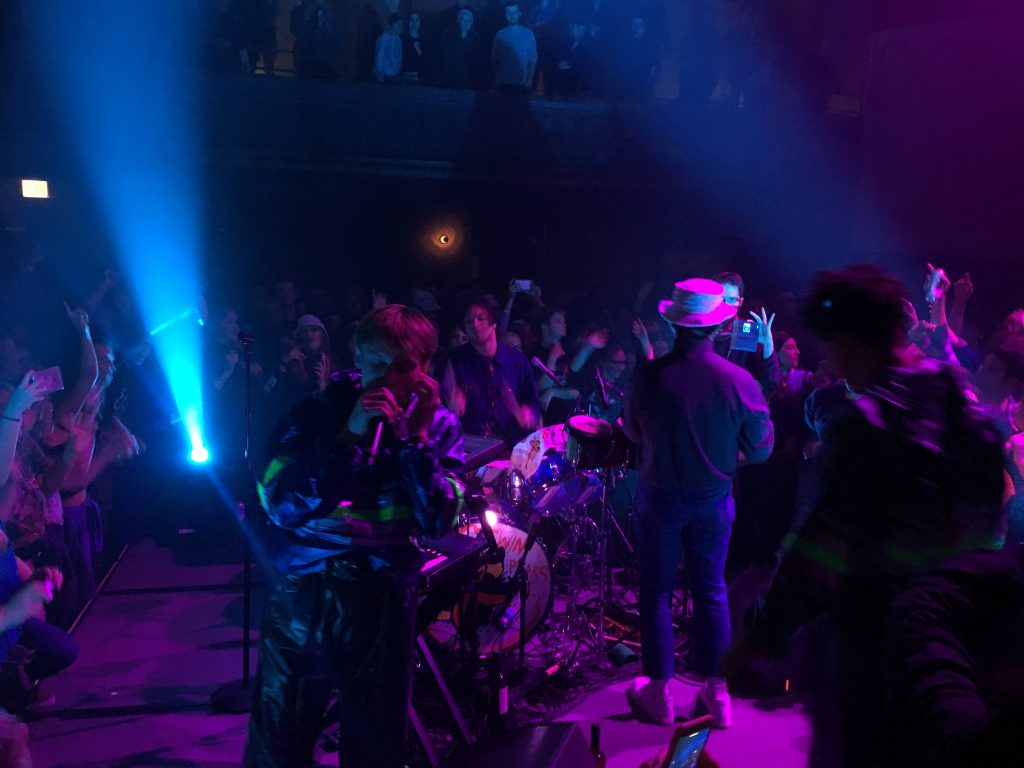 Their show was part of Thalia Hall’s series In the Round, in which a stage is placed in the middle of the floor, creating an intimate DIY environment. This concept was perfect for Grapetooth, who started out playing rowdy house shows around Chicago.

Openers Sports Boyfriend and Dehd, also local bands, laid a great foundation for the main event. Most notably, Dehd got the crowd moving around with their heavy surf-rock vibes, especially during their last song “Fire of Love.”

Before anyone was ready, Grapetooth cut through the crowd to get on the tiny stage, joined by Cadien James of Twin Peaks on drums and Justin Vittori on bongos and chimes (an interesting role). James and Vittori were dressed in all black except for white bucket hats, whereas Frankel and Bailoni donned camo hooded jumpsuits complete with neon green stripes.The band launched directly into “Violent,” their first single. The crowd immediately went crazy, forcing those directly next to the stage to bend at the waist. Grapetooth’s energy was unmatchable, although the only person who seemed to be consistently playing an instrument was James, the drummer. Bailoni touched the keys occasionally, while Frankel made his way around the stage with his mic. Vittori only seemed to play the bongos during the repetition of the mantra after each song (“Sunday night! Up all night! Red wine in my blood tonight!”), and who knows what those chimes were for. However, it’s possible that – despite my second row spot – I just couldn’t see well enough to know. The crowd was that mobile. Still, it was one of the most fun sets I’ve been to. I felt like a part of something great while getting splashed with red wine during none other than “Red Wine,” not being able to feel my feet during “Blood,” and waving my arms during slow jam “Hallelujah.”

But the best was yet to come. As Frankel announced that it was time for their last song of the night, a realization was felt throughout the audience– they had not yet played “Trouble.” As the first few notes rang out, a crowd-wide consensus resulted in the rushing of the stage by more than half of the concertgoers. Suddenly, I was basically on top of Frankel as he sang the catchy chorus: “Trouble/ Trouble comin’ down/ I don’t mind livin’/ I don’t mind givin’ it up.” As the stage overflowed, people fell off, but found their way right back up again. It was exhilarating. 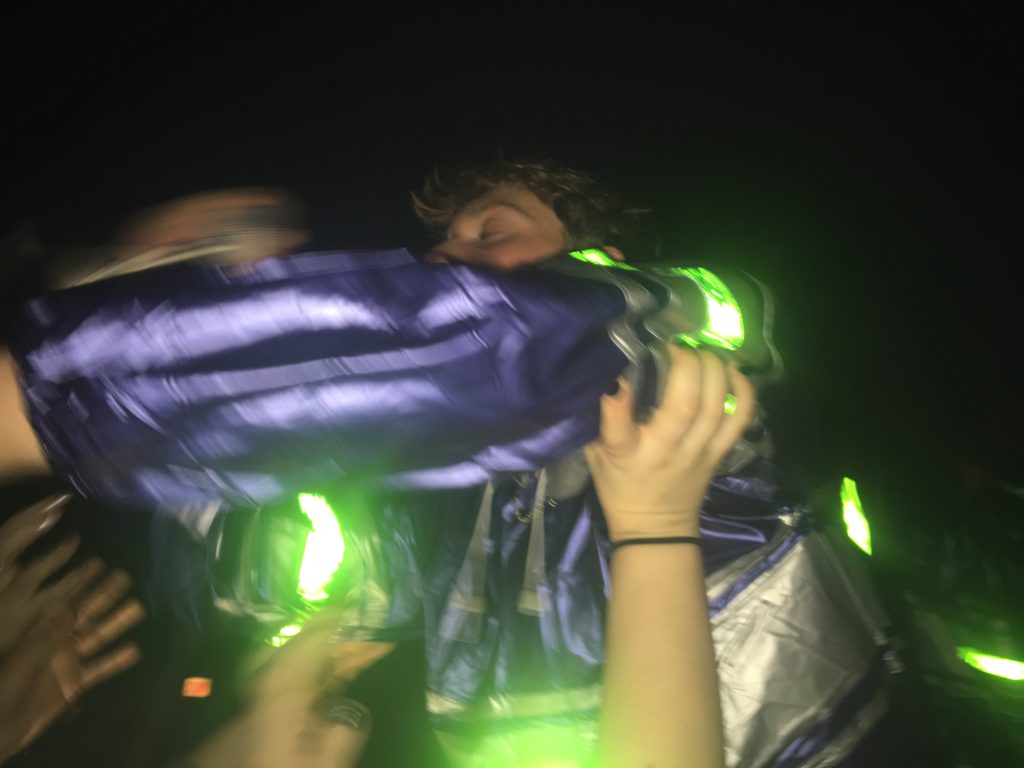 The afterbuzz of Grapetooth’s show stayed with me throughout the rest of the night. Somehow, the shitty pizza I ate afterwards tasted delicious, and as my friends and I got off of the L at Howard, the purple line was miraculously waiting for us.