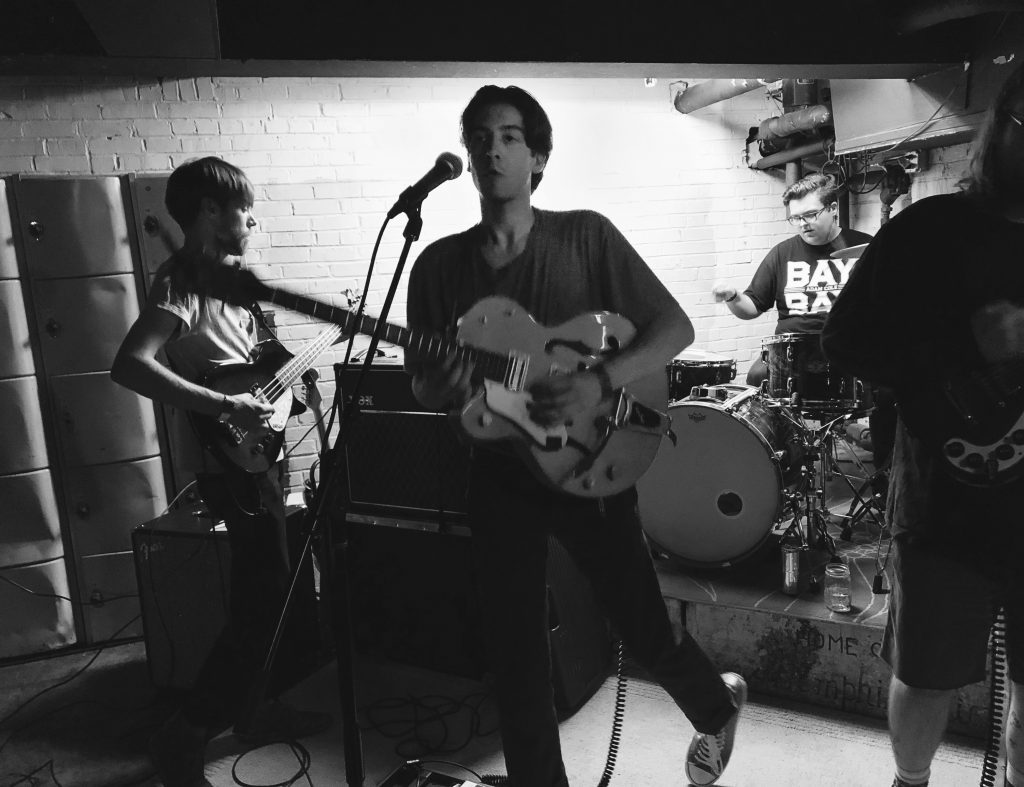 Although musician Ian Ruhala – better known as Hala – may be young, what he lacks in age he makes up for in experience. The 21-year-old has been playing and recording his own music from his bedroom since high school. His EP Young Alumni was released in 2015 after graduation and full-length Spoonfed soon followed, produced during his first semester of college. This summer, he recruited band members and embarked on a 16-date tour, co-headlining with fellow indie favorites BOYO.

I crossed paths with Hala at their last stop of tour in Cleveland, Ohio. The basement of a bowling alley called Mahall’s Twenty Lanes served perfectly as the venue, complimenting Hala’s vintage vibe. The specific corner of the basement in which they played was dubbed “The Locker Room,” presumably due to the row of old beige lockers placed behind the band.

Sporting a grey Tommy Hilfiger shirt and a shoulder fanny pack, Ruhala took a seat on one of the vintage bowling benches to discuss his sound, tour life, and balancing college with music.

Ruhala said of his music that although he gets lumped into the “bedroom pop” genre, he doesn’t like to restrict himself to just that.

“I don’t really know how I feel about that term [bedroom pop], but I do record in a bedroom,” Ruhala said. “I don’t know if it’s really poppy. It’s just like guitar-driven rock ‘n’ roll through the lens of recording at home, so lo-fi is sometimes attached – but I don’t know, I’m not purposefully trying to sound like shit.”

This tour being his longest and first time headlining in the U.S., Ruhala said that it has resulted in close friendships between the two bands – and surprisingly, a lot of nudity.

“Everybody gets naked, really,” Ruhala said. “We were in the car the other day and my guitarist was just playing his gameboy and then he felt the urge to get naked, so he stripped down.”

Other tour antics have included (sorta) trashing a hotel room.

“We kind of – not really – trashed a hotel room the other night, but we got really drunk and busted one of the beds,” Ruhala said. “It wasn’t like a Van Halen kind of trashing where things were actually destroyed; it was more like ‘sorry about this clean up that you gotta do.’”

However, Ruhala doesn’t always live such a lifestyle – he is also a college student, having graduated near the top of his high school class. A type A student in high school, he said that he has learned to relax in college and as a result, has been able to focus more on music.

“If you really wanna pursue music, in the moments that you have free you’ll find yourself gravitating toward your instrument and just playing it,” Ruhala said. “That could be at 2 a.m. after you study, it could be during the day, it could be playing a show. There’s always time.”

However, Ruhala said that instead of sitting down and trying to write a song, the songs tend to come to him.

“I’ll get a chord progression or I’ll have a sentence that could be a chorus line, and it kind of just happens. Usually it has to do with experiences and the song will find me. And sometimes you gotta do some weird stuff to find it,” Ruhala said. “You can’t write a song about heartbreak and not be heartbroken; you can’t write a song about drugs and alcohol without partaking in it. You don’t want to be a poser. And that’s what I’m big on, I just want to write songs that mean something to me and I don’t wanna write fluff, you know?”

Recording and production also play a large part in Ruhala’s creative process. Spoonfed was recorded entirely in an attic, which Ruhala said played an important role in the final product.

“I’ve done stuff in a studio with other bands, and I can just tell, when you bring an engineer in and pay them, most of the time they’re like ‘this isn’t my own stuff’ so they don’t really care,” Ruhala said. “I want to give [an album] the time that I think it deserves. I’m not too much of a studio wizard but I’m learning every time I do something, and I feel like if I’m happy with it, then that’s really all that matters.”

As the show approached, The Locker Room filled up with around 30 people. BOYO was on first, impressing the crowd with crisp guitar riffs and moody vocals from singer Robert Tilden. As they played, the band members of Hala placed themselves front and center, dancing wildly as a form of encouragement. 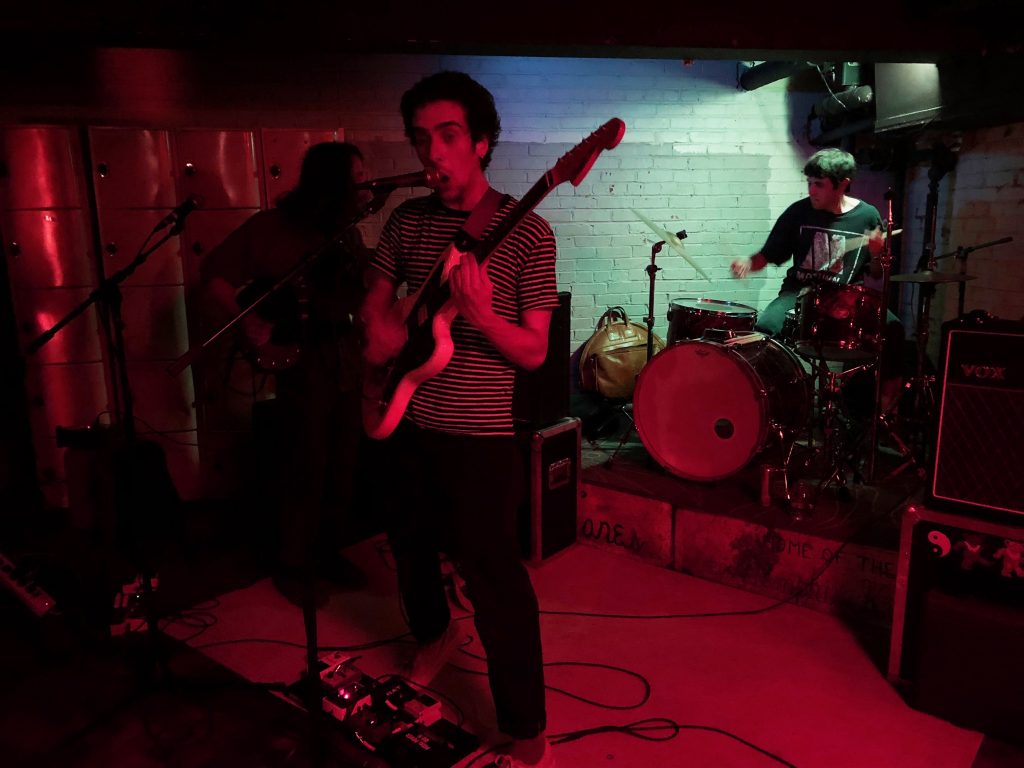 A few moments after BOYO’s set ended, Hala took over, and the members of BOYO replaced them in the crowd. Although suffering from a slight cold, Ruhala delivered great vocals and strummed his Epiphone Casino guitar with ease. Hala played six songs in total, contrasting “Problems” from his first EP with recent single “Keep on Loving” and of course, “What Is Love? Tell Me, Is It Easy?”. Midway through the set, Ruhala announced that his parents were in the crowd, having driven from his hometown of Detroit, Michigan. This just added to the already present feeling that being at his show was like being welcomed into a tightly knit group of friends. It was just the right amount of laid-back and intimate, and one couldn’t help but notice the smiles on the faces of almost everyone as they watched Ian Ruhala and his friends play music.

As for what to expect from Hala’s future, there is another album in the works, hopefully to be released next summer. Ruhala said that it will be recorded with all new gear in a different bedroom, and he is looking to change his direction stylistically as well.

“I just want to genre-hop as much as I can. I want it to be the most confusing and incoherent string of songs, but I still want them to blend in some way,” Ruhala said. “I wrote a country song, a sludgy hip-hop song and then I’ve got some poppier songs and some guitar songs. So I just want it to be a mixed bag of pretty much everything because that’s what I’m listening to right now.”

“I really appreciate [Mason Ramsey]. I don’t get why they’re recording him like they did on ‘Famous’ because if they were to record him in a way that was old school like he is, it would sound so cool,” Ruhala said. “I think probably when he’s like 20 and having a mental breakdown, he will make a fabulous record. And like, it will sound so sick.”

Well, if Ruhala’s prediction comes true and Ramsey does end up making that great record at 20, then I suppose they will have something in common.