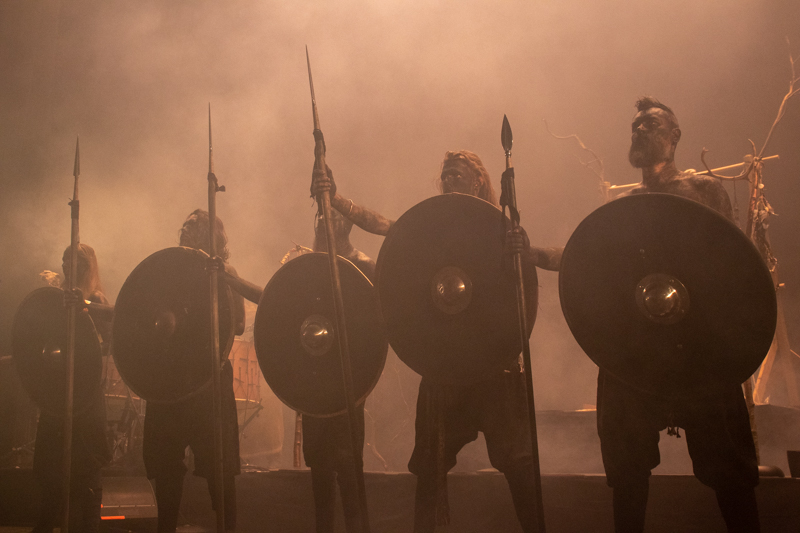 The hundreds of Viking-inspired, fur-clad, face-painted concert-goers wrapped around The Riviera Theater would make any passerby think that they’d stumbled upon a Game of Thrones convention or a Skyrim-themed group cosplay. The fervent crowd confirmed the magnitude of the cult-following of historical reenactment — Northern European experimental folk-metal band Heilung, who had come to Chicago to promote their most recent album “Futha” on their latest world tour.

Heilung evokes the ancient spirits of the Vikings by creating a unique musical experience that transports the audience back in time. Drawing most of their song inspiration from ancient Northern European epic poems and runic amulets, the band weaves a mystical, primal atmosphere with their haunting, multilingual chants and epic beats struck with both human and animal bones on animal-skin drums. Their set included various pagan rituals and battle reenactments, as what seemed to be literal Viking warriors wielding shields and spears lined up on the stage.

The green lighting cast an eerie haze over the band members garbed in tunics, animal bones, and furs, and obscured their silhouettes at times, making the already insane visual spectacle that much more surreal. Perhaps most striking was the costume of front-woman and main vocalist of the band, Maria Franz, whose ethereal vocals and feathered ivory dress lent her the appearance of a priestess or an angel and… wait — are those real deer antlers?!

The whole performance felt far from gimmicky; I was in utter shock the entire time at the epic stage presence of the band and was completely enraptured by their performance. I felt hypnotized by the ritualistic chants and gorgeous vocals of some pieces, and felt energized by the vigorous drum beats and battle cries of others. My favorite song of the night was, without a doubt, “Krigsaldr,” their live performance of which launched them to YouTube fame a few years ago. The crowd’s excited screams gave way to the song’s first few droning drum beats that carried the song to its climax. The atmosphere became heavier with the swelling vocals of the chorus, and it was awesome.

Heilung’s concert was definitely the most incredible I have ever been to, but next time I’ll be sure to don my armor!