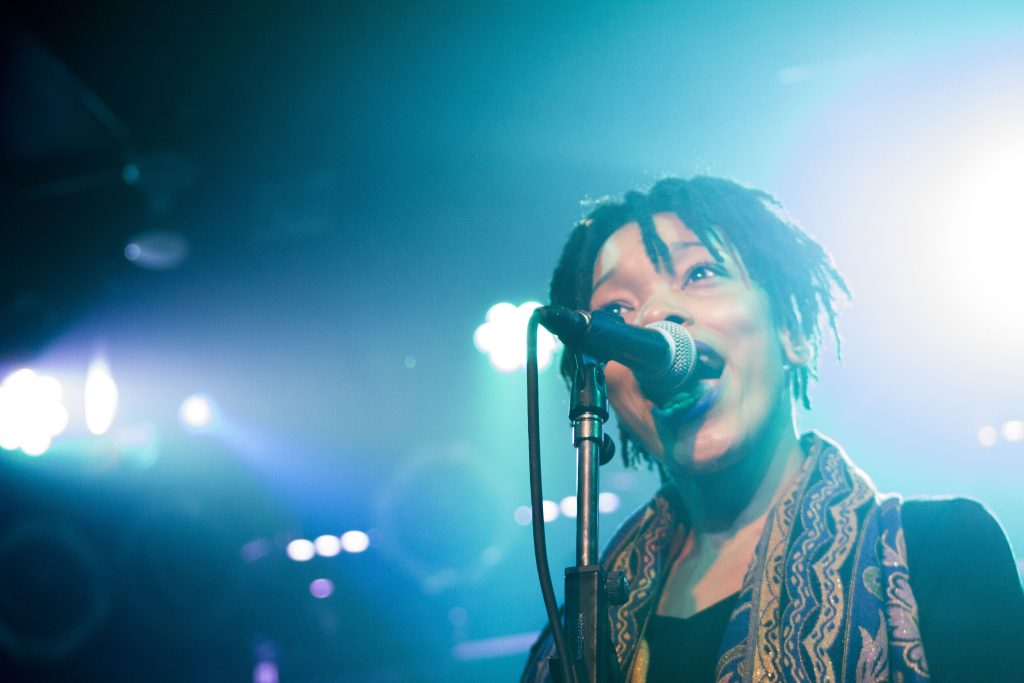 Highness: A Gem in Chicago’s Undergound

[su_pullquote align=”right”] “Elevation is a staple in their lexicon. It is what they want their music to do, their listeners to feel, and also their state of mind to be in when they’re creating. ” — Steffanee Wang[/su_pullquote]

The Tonic Room is completely packed tonight. It’s a Saturday so that’s not surprising for a bar on the edge of downtown Chicago, but it is a special night. For months the WNUR multimedia crew and I had been following Highness, a five-piece, all-female band and collective. Everything has culminated to the release show for their second EP The Highness Collective. Or THC, a nod to what, presumably, drives the creative process behind their music.

The venue is standing room only with people spilling through the front doors into the Chicago cold. Tonight, a variety of artists join Highness onstage: Akenya, with her raw and rhythmic single ‘Disappear’, Via Rosa and her delicate song “Beautiful Stranger”,and DJs Gemini Jones and Nosidam. It is nearly midnight when Highness dons the stage. Ora, the guitarist, lights a stick of incense. Redd, the drummer, lights a joint. And the crowd, showered in hot and hazy red stage lights, is ready.

The collective met at Columbia College and began as a band of nine before narrowing it down to the golden five: There’s vocalist Loona Dae with round steampunk-like frames, and an air of mysterious wonder; vocalist and producer Gem Tree, or Madam Tree if you like; vocalist, keyboardist and producer Schenay Mosley, guitarist Ora, and the ever-cool drummer, Redd. Onstage together, Highness embodies a regality that is all at once performative and organic. Although they’ve been in the scene for a while now, it was only until recently with their first mixtape Young Taboo, and the newly released THC, that the collective has gained more attention. Their sound, which they describe as ‘omnisoul’ rides the line of rock, jazz and soul.

A couple weeks before the release show, Highness hosted an early LP listening party at Pilsen’s eclectic DIY art space, The DOJO. For those unfamiliar, it is a small apartment converted into a makeshift art gallery and performance space. It is a place that harbors a sort of alternative spiritual energy.  Feathers, bones and fake birds cover the walls of the main room and next door, Highness music videos play from a projector in a mirror-covered room. In the midst of it all, Highness sits nestled atop embroidered pillows and Redd holds a blunt languidly between her fingers. They play the album for us, and speak on the themes they explored in the music.

Elevation is a staple in their lexicon. It is what they want their music to do, their listeners to feel, and also their state of mind to be in when they’re creating. It is late and eyelids are low. Nonetheless they have a clear sense of their collective identity, purpose and music. “We are all individuals that come together to make greatness,” Gem Tree says. And much of the greatness they are searching for is self revelational. In the song “Because 789” Gem Tree spits first to a bubbly and bouncy disco beat: Finally I confess/I loved myself and I won’t forget/You’re a gem, wear it on your chest/Introduce your mind, your views, your use. Gem explains, “On this track I was basically saying you can choose to deal with the problems or you can choose to say you’re alive. And you’re alive.” When Schenay hops on later, she talks about finding deliverance. “Holding onto negativity and just finally letting it go. Of course, you’re not positive all the time, happy all the time, you’re human.” There is a duality to life. But there’s also harm in keeping negativity festering inside your soul.

Towards the end of their set at The Tonic Room, they perform “Your Highness,” a jazzy, liquid song that acts as an introduction to each member of the band. And in the moments where they chant “Your highness” during the chorus and the audience repeats it back to them, there materializes a circle of self-empowerment and peer empowerment. In a way, the regality of Highness is also about celebrating the regality and power in ourselves and the rest of the community.

A Note From the Director

[su_pullquote align=”left”] “Through my lifelong position as a woman of color, I’ve realized my potential to ensure that WNUR is inclusive to art from a variety of identities and backgrounds.” — Lauren Harris[/su_pullquote]

My first encounter with The Highness Collective was when I missed one of their performances.

After a late night of music with my friends, I hadn’t thought much about our early exit from The DOJO, a thriving DIY gallery and venue, to catch the train back to Evanston.

The next day my Facebook newsfeed was flourishing with compliments to the many Chicago-based musicians who were involved that night. But I noticed a particular influx of admiration for a specific band that I hadn’t witnessed:

“BOW DOWN TO HIGHNESS,” read one post, accompanied by similar praises on the event page.

I was curious. I needed to know what I missed and, most importantly, who I was supposed to be bowing down to. But one SoundCloud binge later, I was sold. From beyond the screen, Highness managed to pull out my soul, elevate it, shoot it back through my body and send my fingers into a frenzied email to their manager.

At WNUR it is our mission to provide a platform for underrepresented music. That’s been the goal of this student group far before I clumsily signed my name on their clipboard at the freshman activities fair.

I am honored that the women of Highness have given us the privilege of attending and documenting their shows and stories for almost four months. I am also happy to have made them the subject of the first mini-documentary published under WNUR’s name.

This project could not have been completed without the cooperation of the band and the drive and enthusiasm of the WNUR Media Team. There have been struggles, but I owe my gratitude to the media team members who have been on the project since day one and to the new members who came to the rescue later in the game. These last few months have been filled with concert lights, freezing train platforms, misplaced lens caps and naps in the backs of Ubers, but they’ve also been unlike anything I’ve experienced.

I thank Highness for making me fall in love with their music. But to be more specific, I thank Loona for her restful aura, Ora for her laughter, Red for her very essence, Schenay for her radiance and Gem Tree for her glowing grace. I also thank their manager, Aaron, for allowing us to connect with the band.

I hope to continue meeting artists and creating documentaries in the future. My hope is that this project will: Perpetuate a tradition within the station to document the stories of artists in intimate and creative ways, and further connect WNUR with members of Chicago’s underground music community.