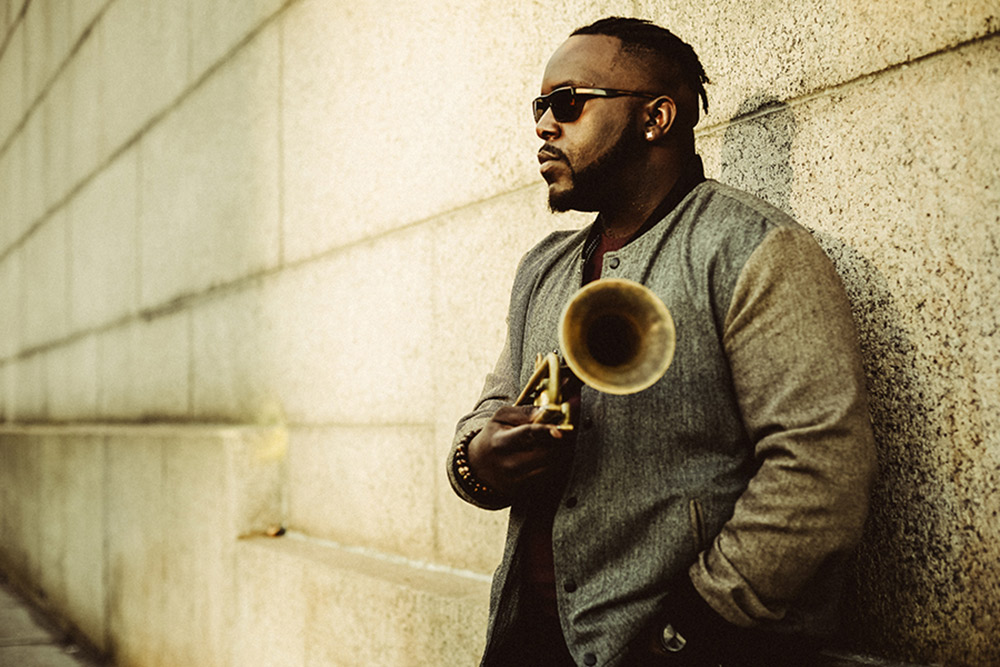 Marquis Hill’s performance this past Thursday evening at Constellation was, in many ways, a homecoming for the young trumpet virtuoso. The awards and accolades which sprung him out of this city go without saying for any fan or frequenter of the Chicago jazz scene, and his current residence in New York is one which surely makes those same fans proud. In coming home, Hill left his current ensemble project, The Blacktet, in New York (with the exception of Joshua Johnson) and instead chose to play with Chicago mainstays Makaya McCraven and Joshua Abrams. The bill, correspondingly, was not simply Marquis Hill, but the names of each in the quartet. In the spirit of this non-permanent ensemble, the feeling of a relaxed homecoming pervades. On Thursday night, the homecoming seeped through in the familial interaction between the four musicians on stage, celebrating the return of their friend, but also, in the sense of the overall connected American jazz culture, asking the question: did he ever really leave? We live in a time, and an international Jazz culture in which Chicago’s tentacles of influence and musicianship extend all around the world. Be it Wadada Leo Smith and Nicole Mitchell in Los Angeles or the annual Doek Festival in Berlin celebrating the ongoing collaboration between musicians from Berlin, Amsterdam and Chicago, Marquis Hill has joined the ranks as a continuing force in/of the Chicago jazz scene, regardless of where he calls residence.

After three flowing and fairly free compositions each with distinct moments of freedom and rehearsed starts and stops, Hill took to the mic for the first time to thank the audience for coming. In doing this he also expressed his motives for coming home “to play some creative music, to play some improvised music.” This statement from him, a declared connection and homage to the AACM tradition in Chicago, set the tone for the rest of the concert, which featured mostly loosely composed, freely improvised extended pieces. For a musician like Hill, who tends to stay more “in” than his AACM forbearers, the choice to play a set of mostly free material was, if nothing else, a bit surprising. But with this surprise there also came a treat, as the sold out room experienced an ensemble and a sound rarely heard from one of the city’s contemporary greats.

These free compositions were structured around the individual sounds of those making up the group. Each took their turn beginning a tune with an open solo, and seemingly dictated the nature of the improvisation to follow from there. The standout player of the night for me, and for many others, talking as they left the club, was Makaya McCraven. Another Chicago staple, McCraven has been playing and recording his unique brand of fast rhythmic “beat-jazz” for some time now. The distinctive and virtuosic voice he brings to the instrument was one which lent itself very well to the creative music sound Hill seemed to be reaching for on Thursday night. There were certainly moments of rhythmic cloudiness and indistinguishable pulses, but to my ears, what made Hill experiment novel was the fairly continual rhythmic underpinning McCraven provided. Halfway through the concert, Hill brought out a friend from New York (via Houston), the young and supremely talented James Francis, who sat down at the piano for the rest of the concert. With the addition of the piano, the group took on a different sound, suddenly tethered to a more complex and harmonically-driven rhythm instrument. Francis, like Hill, plays a more ‘in’ style of jazz than the AACM creative music of the mid-sixties, but nonetheless embraced the genre and experiment with tact and open ears.

Those two descriptors, tact and open ears, for me really sum up the night. In saying “creative music” Hill acknowledged his experiment and the footing he and the rest of the band would be taking outside of their comfort zones. This experimentation and paying homage was admirable for a proper homecoming, but also as an audience member, enlightening to hear musicians playing outside of their primary musical focuses. Frankly, the creative music of the quintet on Friday night pales in comparison to the Wadada Leo Smith and Roscoe Mitchell shows I saw in the same room last year. Maybe that is an unfair comparison, to the true masters and legends of Chicago creative improvised music, though it certainly reflects the conundrum musicians encounter when they take a moment to step outside their sound. While it would be easy, and perhaps commonplace, to tell a musician to stick to what they know, it was above all refreshing to hear musicians at the level of Marquis Hill experimenting and expanding the range of their sounds together in respect for the great Chicago jazz tradition. As with any style of music, there is good and bad free jazz, and as far as I can tell that distinction has to do with respect. Do the musicians approach the tradition with tact and open ears? In the case of Hill, McCraven, Francis, Abrams and Johson on Thursday night, that answer was yes and the resulting experiment was successful because of it.