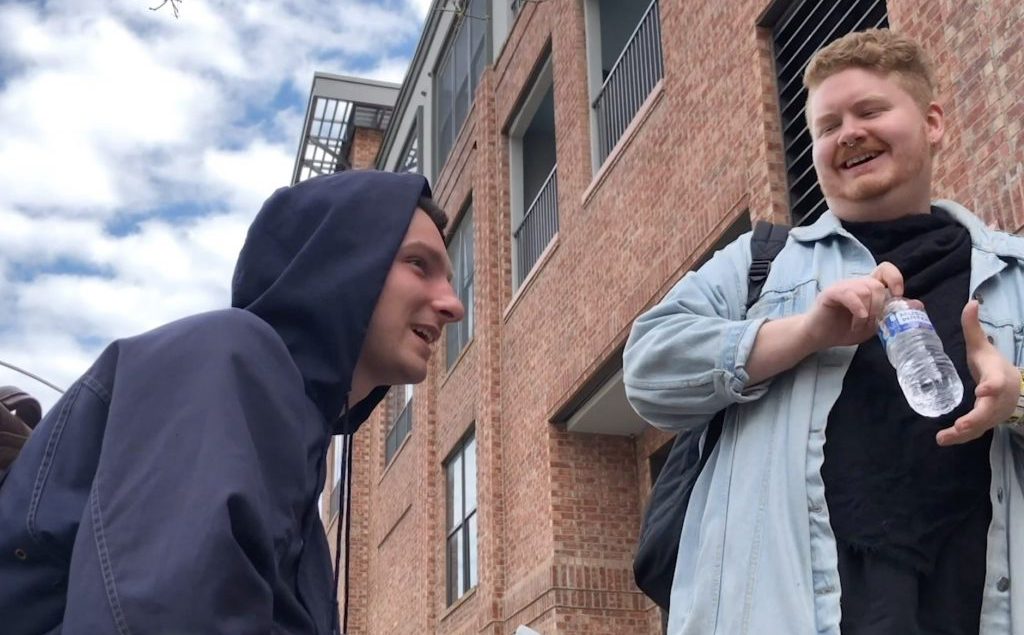 WNUR got the chance to talk to Stephen Fitzpatrick and Audun Laading of Her’s at SXSW 2019. Just a week and a half later, they were killed in a car crash along with their tour manager, Trevor Engelbrektson, while traveling from Phoenix to California. As is evident in this interview, Stephen and Audun were not only amazing musicians but genuine and jovial people. WNUR feels extremely fortunate to have conducted this interview and aims to publish this as a tribute to their memory. We cherish the music they left behind and our hearts are with their families. May they rest in peace.

Ellise Shafer: Tell me how Her’s started. Did you guys always want to be musicians, respectively?

Audun Laading: For me, I came to music a bit late. Me and my family have always listened to music a lot together, like we share a lot of music within the family, so I’ve always been really passionate but I didn’t start playing seriously until I was like 15. Because before that I played like the trombone which sucked, then I played the violin which was not my favorite either, let’s say. I’m sure it’s great for people – different people, different tastes – but yeah, it wasn’t doing it for me. So I picked up the bass at 15 and felt at home straight away, blew all my money on it and enjoyed it ever since, basically. And like, getting into music from there was just a matter of doing something I liked and then sharing it with people and then more and more people were taking an interest in it, and suddenly you’re in Austin.

Stephen Fitzpatrick: My entire family are basically very musical, so I was kind of born into it I guess. They’re all bass players as well, so it was kind of natural that I’d end up doing it. I started off playing drums when I was like 10, and then always played a little bit of guitar and started taking it seriously when I was 15.

AL: We met in university, we somehow had the exact same schedules lined up, so we’d always meet in university the night before we were meant to be doing hand-ins, panicking and stuff, so I think that made for good bonding.

ES: What’s the story behind the name?

AL: Happened pretty organically, yeah. So, we were bonding over late homework and everything. We were both in a couple bands, in the rhythm section, and we were making this arty film one night, made a little YouTube clip and spent all night, up until 5 am editing it and we smashed it up on YouTube to show all our mates. And we had to make a choice right there and then because you need an email for a YouTube channel, and so it kind of happened out of that. We always didn’t want to overthink the band name, and have a sense of mystery.

ES: Your music is incredibly nostalgic to  me. Do you draw inspiration from bands of the past?

SF: We’re definitely into a lot of music from the 50s onwards, I guess. Every decade. And I think we try to incorporate that into every song and kind of link each song with a specific decade in a way, but we try to not make it too obvious at the same time.

AL: I think it’s like a little salad of things we like, chopping up different things and tossing them in.

ES: Your music is often referred to as “dream pop” or “bedroom pop.” How do you see yourselves fitting into this genre? Would you say it’s an accurate label?

SF: I think we’re definitely somewhere in there, but not strictly at the same time.

AL: I guess for me there’s a pretty big difference between dream pop and bedroom pop. They’re always linked nowadays, but dream pop is very glossy and bedroom pop is very unglossy. I guess we try to not be too glossy, but I think we’re pretty glossy. Shiny at least; sparkly. Yeah, dream-poppy but not too bedroom-y.

ES: How has it been coming up in the U.S. as opposed to England/Europe? Any major differences so far?

SF: It’s actually the third time. We came to South By in 2017 and in November we did four gigs in the U.S. and now we’re on a big tour plus South By. It’s our first real U.S. tour.

AL: The crowds are very different. Touring in Europe, every country has got its own personality and every city as well, but coming here there’s also a general change that happens. People seem to be very enthusiastic, for example playing around the UK, no disrespect but people are very rowdy and chatty, while coming here people are quite attentive and are here for actually the show.

SF: It’s a lot easier to eat on the road here as well, like you can just get Mexican in gas stations which is really nice. It’s nice not having to eat greasy pastries all the time.

ES: What message or feeling do you hope listeners can get from your music?

SF: We always say that the band’s kind of like an escape, so like whether it’s zoning out to dreamy love songs or entering some kind of fantasy world…

AL: I don’t think we’ve got any authority to tell anybody about anything.

SF: Basically everything you just said.

AL: Doing that chill is definitely going to be a priority once we get back from this tour. I think the label is pretty eager for some demos, they’re pretty cool about it though there’s no stress. We’ve definitely been coasting on the album for a little while now, and it’s definitely coming to the point where we’re quite excited to be demo-ing again. We visited Paul Cherry’s place when we were over in Chicago, and we were playing the Empty Bottle which is like right around the corner from his house, so we got to listen to some of his demos and it was reinvigorating, it was like a lime-lemonade of inspiration.

ES: Is there anything you want to add?

SF: Hope everyone’s having a very good South By!

SF: I’m sorry to everyone who saw us at South By because I can’t sing at the minute but, what can you do?

ES: You’ve got that rasp.

SF: The baritone is extra baritone.