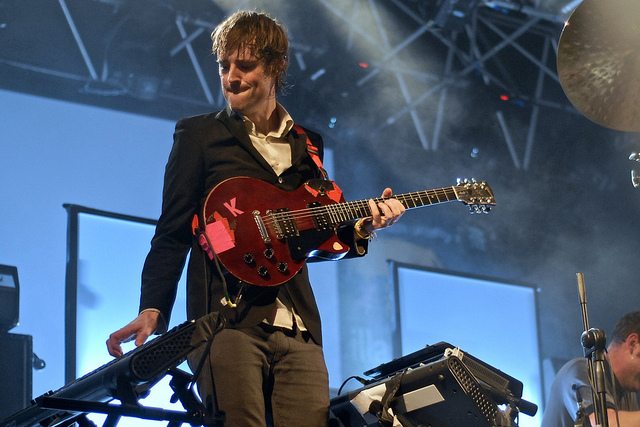 Last month, Denise spoke with Ian Williams, guitarist/keyboardist of math rock group Battles, for WNUR’s Airplay. They discussed some of the artistic collaborations that fed into the group’s latest album, Gloss Drop; the state of the local scene in Chicago; and about the altogether fuzzy definition of “math rock.” Battles will be playing at the Bottom Lounge tonight (June 14) with opener An Aesthetic Anaesthetic.

I know it’s a very different sound on stage as opposed to your studio albums, but there’s a lot of similarities for live shows; I’m wondering how much of it is planned versus improvised?

It’s planned, you know, but sometimes you kind of plan little pockets where things aren’t really that scripted. It’s more like you kind of know some of the events that are going to happen, like eventually the drummer is going to hit his cymbal or eventually somebody’s going to start a new riff or something. So you’re kind of waiting for things to happen, so it’s not like blind improvisation or anything like that.

And of course you’re working with a massive amount of gear on stage and with one of your members, Tyondai [Braxton] gone, and the additional LCD screens, what was the change like and was it hard to adapt to?

Um, a little bit. To be honest, when we started last spring, when we started playing shows after we finished our record, it was tricky because we were so unprepared in some ways because, first of all, it was a studio album. It was the first time Gloss Drop was really written in the studio, and when you do that, if you ever ask yourself, “well, how am I actually going to replicate this on stage?” and you just kind of go, “ah, we’ll worry about that later,” and you don’t really think about it. And so you make this record, put it together, you say it sounds good.

So the question of actually standing there, generating the material in real time in front of people, it’s a different thing to figure out. And we didn’t have much time to figure that out. On top of that, we were running the studio shit, trying to find a way to do that stuff for the first time. We had asked Matias Aguayo, who sang the song “Ice Cream,” if he wanted to come on tour with us for an entire year, and he said okay. So we thought we had this lead singer, and then something popped up in his life unexpectedly, and he couldn’t do it. So two weeks before the show started, I remember it was like, “oh, Matias isn’t coming, so you don’t have a singer, and then it became like, ah, fuck.” That’s when we put the video thing together. “Quick! Throw a video camera in front of Gary Numan.” It came like that, so by the seat of our pants, it took us a little while to actually learn how to do it on stage.

Speaking of Numan, I heard that of all the collaborators, he was kind of the fantasy choice. What was it like working with him?

He was actually a real gentleman. I could tell the difference between working with a professional and working with, you know, somebody like me. I remember he wrote this whole lyrically-evolving piece and it was technically impressive and better than anything Battles had ever done. We thought, “man, that’s amazing, but it’s not sort of the flavor we need on this piece, it sort of didn’t feel ‘Battles’ enough.” So we had to go to him and say, “okay, nice try, but do it again.” And I remember being kind of scared to say that because we felt lucky that he was even giving us the time of day to work with us… But he was a real gentleman about it, I think he appreciated the fact that we didn’t just want to have Gary Numan’s name on the record or something, we actually wanted the song that we liked.

Another collaborator that I’m very interested in is Yamantaka Eye, so how did that one come about? Have you ever worked with him before?

No, we’ve never worked with him before. He’s a mysterious guy. It’s sort of like we communicate but we never know what we’re going to get with him. But I think the guy’s fabulous, I respect so much of what he’s done over the years. So I felt lucky to work with him. I can’t even really tell you what it was like to work with him because I still don’t understand it.

So switching gears a bit, can you tell me a bit about your latest remix album Dross Glop? Did you pick the specific artists or how did that come about?

There’s a guy Stephen Christian, who works at Warp Records, he kind of came up with a list of a bunch of remixes he thought would be cool for the record. Also John [Stanier], our drummer, he’s a big techno fan, so he had a lot of people he thought would be good. And [guitarist] Dave [Konopka] and I chimed in with a few people ourselves. I kind of have a foot in that dance music world, but not fully. So I sort of provided commentary on some of those things. We got lucky that so many quality people were into doing it.

And I feel like there’s been a recent resurgence in math and instrumental rock out there. Would you say Battles has a big role in that?

So, switching gears again, you obviously have a strong history in Chicago with Don Cab and Storm & Stress. How do you see Chicago now and do you think the scene has changed considerably?

Well, yeah. Music is such a fast culture because so much of it is young people; like ages 18 to 27 are the years you waste tons of hours of your life going to concerts and buying records and thinking about music, and that’s great. So that window of time, it recycles people so fast. When I was in Chicago and would walk into the Rainbo, I’d be like, “hey! You’re here.” And if I did that now, I’d be like, “I don’t even recognize you.” I wouldn’t know who those people were. But I guess there are constants, so it’s a little bit of both, I don’t know. I always like going back to Chicago.

And you’re also part of a recent documentary, Parallax Sounds. Can you just tell us a little bit about that?

That guy [Augusto Contento] is a really talented filmmaker. They rented a boat and one day we went out onto the lake and traveled in front of the Loop and just had shots and they kind of shot me just blabbing about music. And the next day, we rode to the river system under the bridges and stuff and did the same thing. I think he makes very loving, touching movies about music that is personally important to him.

So, out of curiosity, I’ve heard you oftentimes cite people like Glass and Reich and other minimalist composers as pretty obvious influences. So I’m wondering what are some unexpected influences for Battles?

I mean, there’s that thing. I think that on a more cosmic level, that kind of stuff really trickles down from the basic rock pulse of life. Through that, it also connects to a lot of tribal and traditional African music. That sort of system of cascading cycles, that basic thing; you know, techno music is that, the sort of hypnotic, repetitive… more of old-school African music does that, and you put it into a Western fancy context and you get Reich and Terry Riley and all that stuff. It’s that basic, pulse-y thing. I mean, we work with loops a lot, and they create that same repetitive copy-paste, copy-paste, copy-paste aesthetic that we use in our computerized world.

You guys are touring a lot and so I’m wondering when we can expect the next Battles album or if you guys are working on something right now?

I’ve been experimenting and playing with new instruments and new things that make sounds. Hopefully that can be some raw material that can go towards new Battles stuff. I think the gap between records will be smaller this time. So it’ll be sooner. It’ll be quicker.