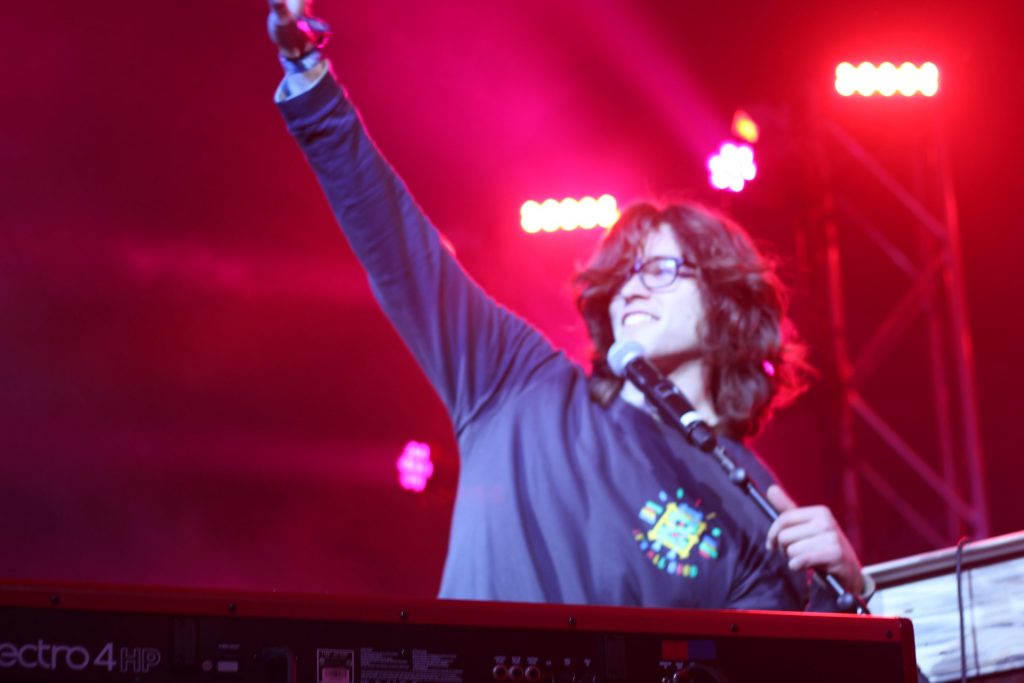 WNUR: Can you explain your involvement with Foreign Family Collective, and how you represent yourself at large?

Big Wild: It kinda started when I was on tour with Odessa for the first time in February and March, and they like, that was when they were getting the Foreign Family idea started. And they asked me if I was interested in doing a release, and I already had this song in the works. I showed it to them and they really liked it, so I finished it up during the tour and it ended up becoming Aftergold.  So it was a pretty smooth and natural process. And the exposure from it was great, it’s opened a lot of doors, and when I play that song in my set everyone recognizes it… as an artist, when you’re first starting out that’s so big to be able to get that recognition, cuz when nobody knows your music it can be tough to connect with people.

BW: We’ll I’m originally from Massachusetts. The weather is totally different, but the music scene in LA is really big, especially for the kind of stuff I do, and Electronic music in general. It’s really cool to just meet artists in the city and have friendships based on that. I really like living there.

Was it difficult to break into?

BW: A little bit, thankfully a couple people who were already there, 2 artists named Developed, knew about my music and invited me early on to a grilled cheese party. I’d only been there a couple weeks, and the invite was randomly on twitter, but I was like ok, and went to a really cool f*ckin party. Hosted like once a month with all these super big people. From there I linked with other producers, it was almost like an incubator for electronic music. So it wasn’t to challenging for me, I was kind of lucky.

How long have you been out there?

BW: I’ve been in LA for a year and a half, and lived in San Francisco for six months before that.

How was the scene there, was it more difficult because there may be less going on?

BW: It was definitely more difficult, the music scene wasn’t as big. But there are actually some sweet venues there. That’s where I first performed and first linked up with different musicians. It was kind of like when I started to break through a little bit and connect with people I needed too. The scene’s smaller, but there’s still so much you can connect with.

BW: Tough to say, I play piano and drums, but I’ve been teaching myself. My real strength is producing on the computer and writing songs. I feel like I’m a songwriter at heart. For that you don’t necessarily need to be great at any particular instrument. What inspires that is hearing a song that blows my mind… I’ll just analyze it and draw inspiration from it. Take out elements of it and realize what makes this song so good. Not copy it but look at like the way someone does a piano line which has a lot of emotion and do something similar with the guitar. You can never had a fully original idea it’s always based on something you’ve scene, heard, or experienced before. That’s how it is with music. The real creativity comes with how you’re gunna make it your own. How are you gunna take that idea and make it something that everyone is gunna love too.

How did you start?

BW: I started when I was in high school when I was 13. I honestly don’t know what prompted me to do it. I think I was just getting really into Hip-hop and I wanted to start making beats myself. I just downloaded fruity loops and f*cked with it for a long time, and my music sucked for a few years. But I was learning how to build the foundations of a song, how to structure it. Coming up with catchy melodies. That whole process was really long but it was super motivating, because once people started getting into the music it motivated me to keep going. SO I’ve been doing this for a while, and it was weird to because none of my other friends made music…for the most part kind of a solo thing. In my group of friends I was just kind of the music guy. Which was cool, almost the fact that there wasn’t a scene in Massachusetts helped me out because I didn’t like, have competition. I was just exploring sounds. It was a great way to get confidence in my song writing ability without having someone saying ‘oh this sucks’.

How many years was the “meh” process?

BW: Probably 2 years, I also just didn’t know what I was doing. There were no tutorials for it, so it was like totally in the dark about everything. My sounds sucked, so I was slowly building up a library of sounds. Kind of like learning everything by myself and once I started to get a good sound pallet my ear got better. I would send out my beats, actually start to sell them online to rappers and stuff. And was like alright I think this is going somewhere. Wasn’t until college that I started to go the more electronic route, and make music that didn’t necessarily need a rapper on it, and could kinda just be on its own. And I started to get more experimental with it…In to college, I felt like I had enough chops to start making stuff outside of just one genre. That’s when this sound that I do now started to take form. “

What do you like and dislike about being an artist?

BW: Probably one of my favorite things is the freedom I have, I don’t have a 9 to 5 I work on music whenever I want to. And I have the great opportunity to be able to explore all these places. This year I’ve been around the country, to Canada, Lake Tahoe because I make music. That’s so cool, I feel like I have this ability. I can’t literally do anything I want, but I definitely have more freedom than a lot of other people. I love making it, and playing it for people, and seeing how they react.

On the flip side, touring for example it can be really hard to make music, because you’re constantly on the move. It’s like two different mind states, one is producing and making and the other is performing, and they really are different. It took me a while to realize, I always thought they were kind of the same, but the more I performed I realized it’s like a totally different mind state. “

In interviews do you ever feel like it’s the performance side of you?

BW: I would say, ya probably doing interviews is a little bit of a performance, I try and be as candid as possible but sometimes its like, its hard to be fully open all the time. That said it has been a great experience touring this year and helping me get more comfortable. Kind of like opening up to the crowd more, not having this face all the time, just being myself. It’s also hard when you’re starting out money wise. It wasn’t until this year that I was able to like, drop the side job…  Now I feel that freedom especially because I don’t have to do that side job. You worked your job, got back home, was like ‘I’m tired’, but you had to work on stuff. That was really tough too.”

BW: When I’m not on tour my average day is basically like, get up, eat breakfast, walk to the coffee shop, get some coffee, and work on music. It’s pretty simple. I live a pretty minimalist simple life, live with my girlfriend, who’s also my best friend. So we’ll go out sometimes at night to friends, or people spinning in LA. When I’m on tour it’s a totally different thing. I’ll work on my set, perform at the show, and anything can happen after the show.  For the most part, it’s a pretty simple lifestyle; its how I like it.”