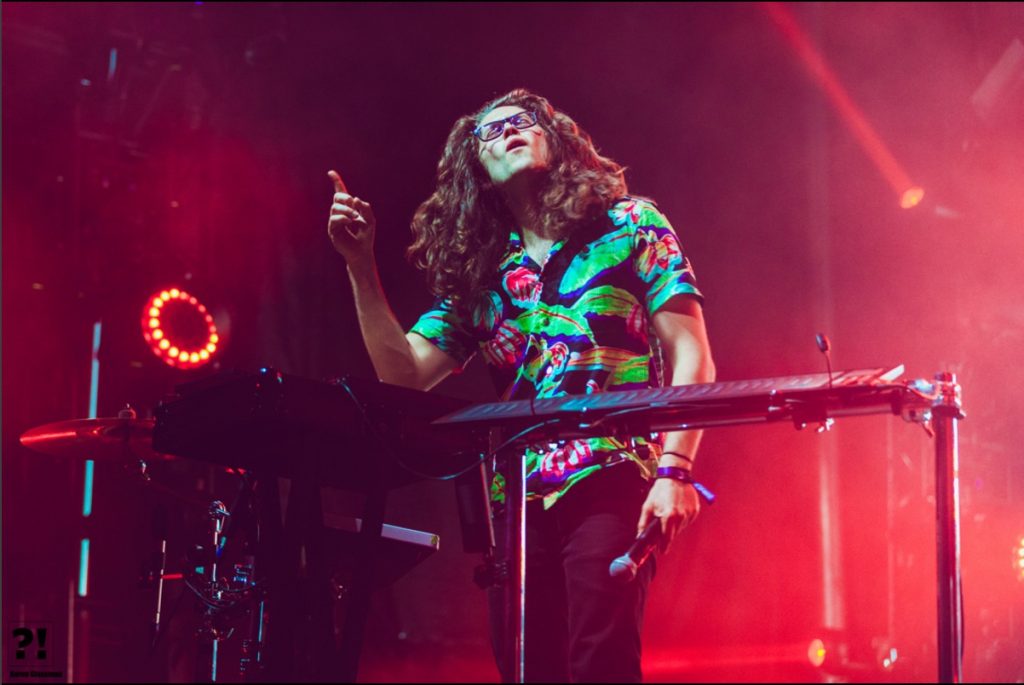 This past weekend I got to meet the up and coming talent known as Big Wild after his booming set at Electric Forest. We chatted and conversed over his craft, how he creates the signature Big Wild sound, and what it means for him to play on stage. Big Wild is a part of Odesza’s Foreign Family Collective, and has shared the stage with the likes of Odesza and future-funk legend Griz. Jackson is currently working on new material that he hopes to have out soon. Be on the lookout! Read on for a full transcript of our conversation.

This interview has been edited for clarity.

Vic: I’m here with Jackson, a.k.a. Big Wild. So tell me a little bit about where you’re from, how you got your base and your start.

BW: I’m from Massachusetts, and I started producing when I was about 13. I’m 26 now, so half my life has been about making music.

BW: I actually started making hip-hop. I wanted to copy what I was hearing on the radio. I used to sell instrumentals throughout high school, that was my first little business. It was when I got into college when I started to pivot more towards electronic music, it was what was inspiring me at the time.

Vic: Where’d you go to college?

BW: I went to school in Boston, Northeastern.

Vic: Very cool! Lots of people making music around there. So did you play a lot of gigs in college, around Northeastern?

BW: I actually didn’t. I never played any shows growing up. I was always the kid behind the computer, making music, and that’s what I love to do. It wasn’t until I started meeting with an agent, who heard my music through Odesza, and getting shows that way. That’s when I realized that I needed to start improving this part of my career.

Vic: So you produced first, then started playing live.

BW: Totally, for like a while too. That’s how I first discovered and learned everything about music, through producing on the computer.

Vic: So I know you use keys and drums while playing on stage. I’m guessing you started playing instruments before you made electronic music.

BW: Well the only instrument I played before I made beats was trumpet. I played that for like 6 or 7 years.

BW: Yes, jazz band at school. I enjoyed trumpet, but I think one of the main reasons I ended up producing was because I felt like trumpet was kind of limiting. I had this one instrument and I could play one note at a time; and here I have this computer software where I can literally make an entire song, environment, or whatever just out of my head. It was so interesting to me, and it was kind of along the way that I started to learn keys as I produced. It wasn’t really until I started playing live that I picked up the drums. I was late in the game, I’m not a trained drummer or keyboardist, it’s just something I learned along the way.

Vic: Well you definitely have rhythm!

BW: I always wanted a drum set when I was a kid, but my parents said it was too loud. I feel like I have a natural sense of rhythm, and that definitely helps me with learning drums.

Vic: So this goes along with playing live. Some artists are known to play the same set at every show. What do you do to keep your sets fresh, new and exciting?

BW: I tap into whatever is inspiring me at the moment, and figure out how to put that in my sets. I ask “how can I draw more emotion out of this part? How can make this part feel more like a moment? How can I make this build a little more intense?” People sometime really want that drop to hit. A set, how I view it at least, is just tension and release, and there’s a million ways to do that. But as long as you have that formula in mind, you just have to play around with it, have fun.
It also helps to go around these festivals and hear what everyone else is doing. A large part of what I do, making it individually to me, is noting what I like and what I don’t from others, just listening. So it’s keeping it true to myself, not trying to hop on a trend. I just put myself into the show, by playing instruments, and make it feel like my music. It’s really just me.

Vic: So I actually found out about you through your remix of Griz’s For the Love. I actually play that on my radio show all the time, great track! How do you feel about taking a song and gaining exposure through a remix?

BW: I think it’s really cool, and I’ve done a couple remixes where I’ve ended up on tour with the artists I’ve remixed. That happened with Odesza and Griz. It was a really cool gateway into getting to know their fans, and what they’re into. It’s a test for me too, where it’s my own sound, but it’s also something their fanbase would like too.

Vic: Well you definitely flip the songs on their heads.

BW: Yeah! I flip it a lot. That’s what I find fun. It’s all about a challenge, I like a challenge.
I haven’t been doing as many remixes lately, because I’ve been focusing on my own music. But there’s something awesome about remixing and adding your own flavor to something that’s already out there.

Vic: So switching gears a little, what are your most used production plugins? What’s something every Big Wild song uses.

BW: Hmm, I like to use Arturia synths, they remodel a lot of vintage synthesizers, like Moogs, Prophet, and Jupiter. I like to use a lot of models of old synths from the 70’s and 80’s. I just love the sound, and integrating them with more modern sounds. I’m really big on bridging old and new, because I think they both have something really cool to offer. I really like Soundtoys as well.

Vic: I love those plugins too! What is the vocal manipulator called?

BW: Little AlterBoy! Yeah! I use this trick with AlterBoy where I put it on a piano track, and set the plugin to hard tuner, and it acts like an auto-tuner. It adds this chorusing effect, and makes your piano sound super distorted and old. It’s nice to throw a plugin used for vocals on a piano and see what happens, you know? Don’t look at a plugin as only being used for that one thing, because a lot of awesome sounds are made by breaking out of the box.

Vic: So if you weren’t making a living off of your music, what do you think you would be doing with your time?

BW: It’s tough to say, because I’ve been wanting to do music for so long, but I think I’d want to be doing something along the lines of environmental protection. Working to protect national parks from becoming privatized. I’d want to do something to help climate change, that’s something I really care about.

Vic: Did you study music in college?

BW: I studied music business, but I did a lot of music classes. I quickly found out that music business didn’t really interest me that much. I did a lot more traditional music classes, like training your ear. I tried to learn jazz piano and I was just experimenting with things.
I knew music on a very technical level, and I wanted to learn how people had been making music for hundreds of years.

Vic: So what’s the weirdest (or coolest) thing you’ve seen in one of your crowds?

BW: One time when I was on stage at Okechobee Music Fest, it was the first year they did it. I was on the beach stage, and it was the very first day. I don’t think the festival expected as many people to come as did, so my crowd was HUGE. So far back for a tiny little stage. There was no security at all, and people were climbing on stage, dancing, doing whatever they wanted. It got really rowdy.
So I was doing something on the drums, and I turn around to trigger something on my controller and I see this person out of the corner of my eye just standing very close to me. I was immediately like, “woah!” I had no idea he was there. You could tell he was on something, but he had a big smile on his face and put his arms out. So I hugged him and we had a little moment on stage, and then he peacefully walked off the stage.

Vic: Haha! That could have turned out a lot worst than it did.

BW: It could have, but it was a cool moment because there are plenty of instances where people get knocked out by security, and it was cool to see something happen where that wasn’t needed. It was just like “alright, you wanna hug me? Let’s hug. We’re cool!” It was a very peaceful way to do it.

Vic: So I didn’t see you have a computer or CDJs on stage, so I was really curious as to how you control your music on stage.

BW: I use Ableton, but I try and keep the computer out of sight. It’s on the side of my riser, just on a table. I have it there in case something goes wrong, but I don’t really look at it. I have an Ableton Push controller, and that’s what I trigger all my clips from.

Vic: That’s honestly a great way to do it. I was convinced you were playing without a laptop. I was trying to figure out how you were triggering everything, and I knew you had a controller, but it still made me wonder how you were pulling it off. It’s very cool since you don’t have a screen in front of you.

BW: That’s a big part of what I’m trying to do, I don’t like things to be between me and the crowd. A computer just really feels like a barrier for me. So try to put everything to the side, and I try and make my setup really open. There’s no table, it’s just me and my instruments.

Vic: Anything else you want to say?

BW: I’m working on new music. I’m singing a lot, and writing lyrics. I don’t know if it’s an album yet, but I’m making a bunch of demos and seeing where it goes.

Vic: What type of style should we expect?

BW: It’s similar in style to what I already do, but at the same time a bit of an evolution of my sound. I’m creating music that integrates vocals and makes you dance too. It’s not just instrumental. I’m really excited about it and it’s what is really inspiring me right now.