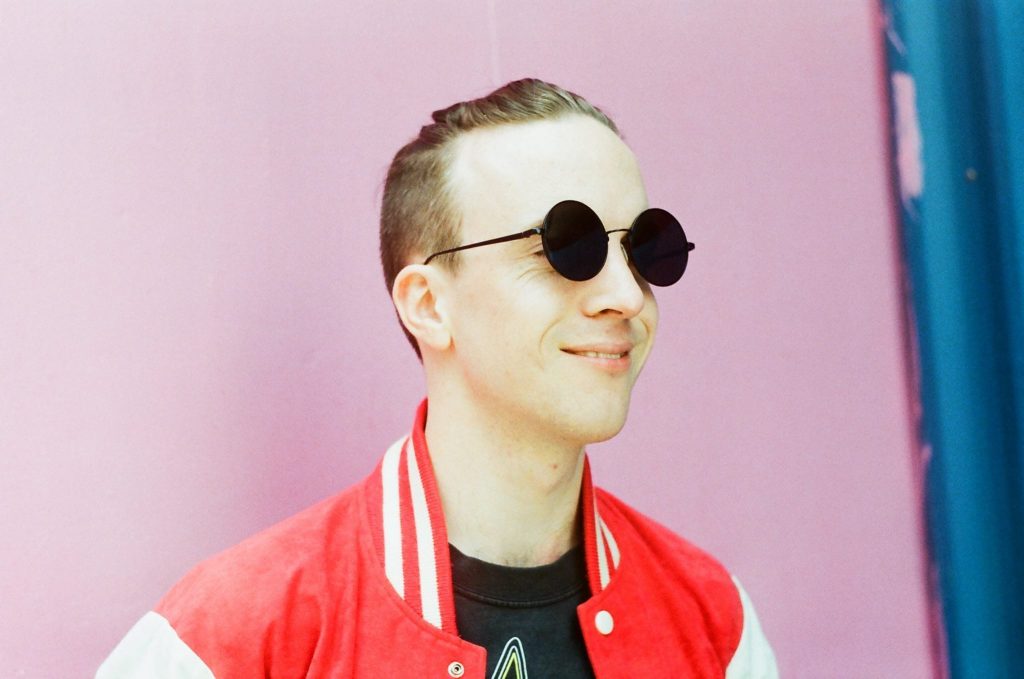 Meet Philip Brett: a 31-year-old Irishman who has made a name for himself as one of the most prominent promoters of Korean indie music. As a founder and editor-in-chief of Angle Magazine, Brett has transformed the small website into an artistic collective responsible for hosting music festivals and connecting bands together. Find out how Brett stumbled upon the marginalized music scene and why he prefers K-indie to the faceless industry of K-pop.

Q. Where are you from, and how did you end up in Korea?

A. I’m from Ireland, from a town called Galway. I guess it’s one of the cultural hubs of Ireland. It’s got a pretty bustling music scene, so I grew up surrounded by all of that. I came to Ulsan about four years ago. I originally just came here to teach English, and then just fell into the underground music scene in the South. Through that experience, I got to know the bands and the artists, and we started Angle to try to support them.

Q. So how did you decide to get involved in the Korean indie music scene?

A. It started because I lived around Ulsan, which is a pretty industrial city, and there wasn’t a huge amount happening here in terms of culture. So after one year of living here, I started traveling around different cities like Busan and Daegu, where I found shows and got to talk to the musicians after their gigs. Getting to know the people was as important as getting to know the music. It was then that I found out something existed here. I think that’s the biggest problem — when any foreigners come to Korea initially, they’re aware of K-pop, but anything outside of that is a mystery. And even to the people living here as well, a lot of people aren’t aware of the indie music scenes. Because of my own experience with the music scene in my hometown, I could see the ways to help the scene grow more.

Q. So how did Angle Magazine come about?

A. It started in September 2013. It was only three of us when we started out — myself, a guy from Seattle called Joshua Hanlin, and one Korean friend. We did all the interviews, editing, translations, and we got everything together and put it online. From there, we just kind of tried to keep it rolling. Part of the initial [coverage] was isolated in Ulsan. If someone creative was here, they wouldn’t have somewhere to go and perform and show their work, so we wanted to give that space. We all wanted to have that space where people could say, “Hey, if I make this and put it on that site, then people can see it.” That was one of the initial ideas. The idea behind it constantly grew without us really planning to do that. It just kind of evolved naturally to involve Busan and Daegu in our first issue, and over the next few years it’s grown to cover the full southern part of the country. People have come and gone; everyone who works in the magazine does so on a voluntary basis — we all have other jobs, full time jobs, and some people with two or three other jobs. But everyone does it to support what’s happening around us. Even when we put on a show, we all go to it because they’re the artists that we want to see perform, so it is its own reward in that way.

Q. How did you come up with the name “Angle Magazine”?

A: I guess you can say that we wanted to give a new angle, a new perspective, of what is happening down here. The general viewpoint has been, “Oh, there is nothing happening outside of Seoul.” But Angle takes a different look at it from this side.

Q. What’s the indie music scene like in the southern parts of Korea?

A: I think the indie scene all over the country is pretty big, more so than the people involved in the scene itself might realize because it’s so divided. There’s a serious lack of connection between the cities. Now there’s a stronger connection, let’s say, between Daegu and Busan. A lot of bands in Busan will play together with a lot of bands in Daegu, but might not know about the other bands [in the other cities]. And that’s the same in Seoul and around the rest of the country. Each scene is isolated within itself. I guess the most important thing to hop in right now is to really bring them all together: having bands traveling around, playing with different people, and going to different cities to play for the audiences there. I think that is the biggest thing that is lacking in the scene here. Not the talent, because the talent and the music are there, but the commitment to go out and play somewhere else. From my own experience of looking at shows, there are a lot of bands who don’t understand the idea behind DIY tour. When they hear a tour, they think of nice hotels, they have to be paid for and looked after, rather than the DIY where you just go and play a show. Maybe five people show up and you sleep on someone’s floor, but you go, you get your music out there and you create those connections.

Q. So I guess media outlets like Angle Magazine is part of what helps bridge those gaps between these areas?

A: I hope so. For example, we host an art festival called Big Day South and we hosted it for the third year in a row. The first year, we held it in Daegu just as a one-day festival. And it’s not just music — we had live performances of dance, poetry, live art, music and various things. Last year, we brought it to Ulsan as a three-day festival that incorporated theater performance, poetries, performance artists, and live graffiti paintings out on the street. We had three days of constant creativity. One of the things I noticed from that experience was that one of the bands and one of the poets who performed ended up collaborating later, working together on one piece. So when we bring in people who don’t normally perform together and have them in the same setting where they can interact and get to know each other, hopefully it leads to more collaboration and cooperation in the future. That would be the goal behind our live shows.

Q. How would you define indie music? What differentiates indie music from K-pop?

A: Musically, very little. It’s more to do with your ethos: the concept behind it. I view indie as independent. Not necessarily a genre, but a style or a way of doing things. I would say K-pop productions will only perform shows on a huge stage for a lot of money, whereas an indie act — whether it is hip-hop, rock or punk — will go and play anywhere because it is what they want to do. They want to be out there and they want to perform.

Q. What draws you to the indie music scene?

A: It’s real. It comes from them. It’s something that they create. K-pop has nothing for me because it’s faceless. It’s faceless in that all of their performers get so much cosmetic surgery, or other stylings, and everyone looks the same. So it is essentially faceless. There is nothing there that is recognizable for me. The music is lifted straight from the pop structure that was created by international pop songwriters and producers like Max Martin. They took the exact same structure right down to what kind of eyeliners they should wear and so on. When they perform, you know it’s 100% manufactured and nothing is going to surprise you. Nothing is going make you just stop what you are doing and pay attention. But I can go to an [indie] show, and maybe it’s a band that I’ve seen a hundred times before, and I can still have that moment where all the conversations just stop and people just have a connection. There is something real there. It makes me sound very absurd, but I can’t think of a simpler way to explain it right now.

One other thing I loved was — when I was still getting to know some bands like Say Sue Me. I absolutely love their music. They are in the Electric Muse label. They released their EP in 2014 and an album last year. We interviewed them first at the start of 2014 and they played for so many shows for us. Part of why I love them so much is not just because of their music, but because of the people as well. The fact that you can go to a show to see a band with a great live show, and then afterwards you can just walk up to them, talk and get drunk together, it creates a much different vibe. Now that I think about it, a lot of the bands that I listen to are the ones who I’ve gotten drunk with before. You get such a stronger connection to the music when you have that personal connection as well.

Q. What’s the next step for Angle Magazine?

A: We’ve gone in a lot of different directions. We’ve created the online magazine that has been going on for more than two years now, but we’ve also held festivals. We’ve also arranged art exhibitions, released a charity Christmas album and collaborated with some artists to make t-shirts. They are screen-printed t-shirts featuring an artist’s design, and when we sell the shirts, the profits go to the artist. So we’ve continued to make more ways to support the scene, not just as an online site, but by actively being involved in the community. I think the overall goal is less of just maintaining a magazine and more of trying to build a community, trying to bring people together, trying to connect both the foreign and Korean scenes, and trying to connect the cities together. We are just trying to continue to create new ways to support indie bands and help them develop as they get their names out there.