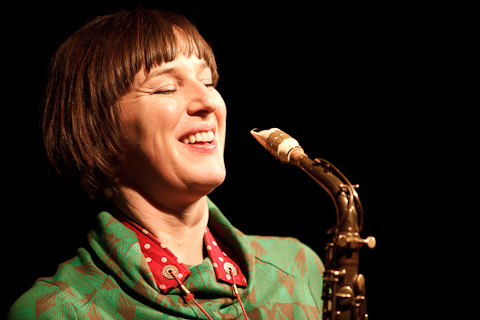 Silke Eberhard is a Berlin-based Alto Saxophonist, clarinetist and composer. Her work simultaneously explores both tradition and progression through projects of original composition and study. Her most recent album, recorded with the I Am Three trio, reimagines the work of Charles Mingus in a bass-less, sax-trumpet-drums trio setting. Eberhard is in Chicago for the second annual Exposure music series at Elastic Arts in Logan Square. The series aims to bring a internationally recognized improvisor, like Eberhard, into the Chicago music scene for a series of workshops, rehearsals and performances. Silke and Paul Giallorenzo of Elastic Arts were kind enough to stop by the “J-Word” this week to talk about the series and the music. Hear the full interview below:

Silke: The first time I came to Chicago, I think it was 2013, was for the Umbrella Festival and I played in a quartet with Mike Reed, Jason Adasiewicz and Jason Roebke. That was my first real encounter with the musicians, but of course I always looked at Chicago scene and really enjoyed what they do and felt a very strong connection. So I’m really happy to be here now and have that relationship flourishing.

Leo: I’m interested even, if you could talk more about Berlin. Because the city also has such a flourishing experimental music/improvisation scene, of a different nature artistically and stylistically than Chicago. So I’m wondering, for someone like you who is back and forth in conversation with both scenes, what do you see as interesting qualities that bring you to Chicago or why do you think people from Chicago want to go to Berlin?

Silke: This is not an easy question, I have the feeling there are some people in Berlin who like to play jazz, but also improvised music. Of course some people like to separate and do only one thing, but there is a large pool of people who like to do both, and I can see the same thing in Chicago. People play improvised music, but it is also very rooted in jazz, none of us are afraid to swing also!

Brock: Swinging is always good haha, who, if anyone, were you influenced by when you first started playing, either the clarinet or the saxophone? I find it very interesting that you have some records which fall on the much more free-improv side of the spectrum, and also records like the I Am Three record focused on what would be considered more traditional in the jazz canon.

Silke: I started on clarinet when I was a child, playing Bavarian folk music, so it was a long way to get to jazz from there. I don’t know, I love all those old jazz recordings and I want to dive into them and study them. I also like to play tunes, not only my own, but also those of other people and especially my heroes. It was always my goal to rearrange them, not to make a copy, but to make my own out of the tune, and in turn that process has influenced my own music writing.

Brock: It’s interesting you started with the Bavarian folk, because in a way, jazz is an American folk tradition. And in a way, that to approach the music from the tunes and a rearranging concept is a more folk approach to the genre. In particular, on the Mingus record, what drew you to play those Mingus tunes in a trio setting, and what were the challenges you faced adapting those orchestrations to a small ensemble?

Silke: Nikolaus Neuser, the trumpet player, had the idea to do a jam session and play some Mingus tunes wondering how they would sound without bass and piano? We discovered “ah yes,” because those melodies, even the chords are so strong, that everyone in the group could always hear them and play off of them. So we said let’s do this and play the skeletons of the compositions. We don’t think so much about “I am playing my solo now” we really try to do a collective thing all of the time. Every one of us knows all of the voices, mostly the bass notes and the melodies, so we can constantly exchange and switch parts throughout.

Brock: I think you can definitely hear that, especially if you are a big Mingus fan like myself, how each of you are able to bring in these recognizable parts of the tunes at various moments in the songs. So these references are constantly popping up, that if you’ve heard the tunes before, you are probably hearing anyway.

Leo: So you played a short solo set last night, and then you have trio and quartet on Thursday and octet on Friday. You’re covering the the range of ensemble sizes, growing as the week goes on. Was that the plan, or even more broadly, how are approaching the different groups?

Silke: The octet will rehearse, and I have written and brought some music specifically for that group. The smaller groups will be improvised.

Leo: From your experience as an improvisor, what’s the difference between playing in those different groups and playing solo as well? How does your mindset change as a performer, especially with some of these musicians you have never played with before?

Silke: Of course, I’ve played with Fred Longberg-Holm once and with Mike Reed several times, but the set ups are so new, and for instance I’ve never played with Dave Rempis and I’m looking forward to meeting my saxophone colleague. But, you know what, I don’t know what will happen and that’s cool.

We are now happy to be joined by Paul Giallorenzo from Elastic Arts, what is the Exposure series?

Paul: This is actually the second annual iteration of the series. Last year we had Tony Malaby, a great saxophone player from New York. He was in town and we had a similar arrangement of a workshop, rehearsals and two performances. We made this an annual program at least partially to kind of do something a little bigger and more special than our usual programming, which consists of about 3-5 concerts or arts events per week. That works out to about 200 performances or events every year, so we wanted to try to put something together that was a little different, a little higher profile and maybe more special than the usual local-centric weekly programming. The idea for Exposure came about with the intention of bringing someone both significant in stature musically and professionally from outside of Chicago, to come here, not only to give audiences a chance to see and hear them, but also to give local musicians an opportunity to work with this person. In that we are trying to facilitate communication about different types of practicing, different modes of rehearsing, composing and improvising, so there can be a mutual exchange of ideas and influences. Last year was very successful and this year has also been really great so far and we are looking forward to the concerts.

Leo: Thank you so much for putting together this great event, and thank you to Silke for both traveling across the Atlantic and making your way up to Evanston.

Silke: Thank you for having us.

Look out for Silke’s new record out on Intakt records in June featuring her trio and a collection of original compositions.