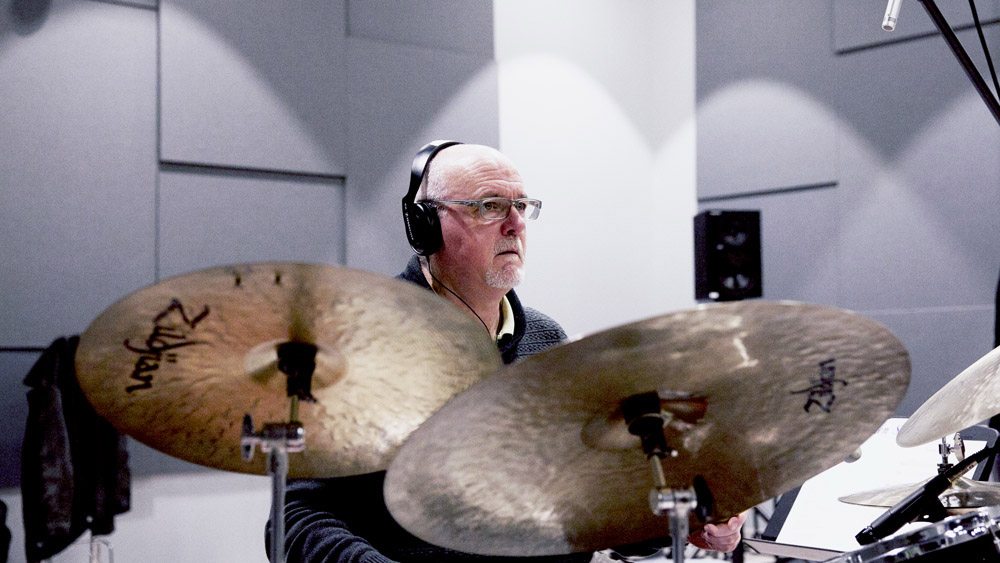 We are here with Volcano Radar.  The band is Julia Miller, Elbio Barilari, and joined today by Sam Bradshaw on Bass and Tim Davis on Drums.  So what did we hear today?

2 original compositions, 1 song/poem by Leonard Cohen, and finally we ended with an open improvisation.

Tell me about that Leonard Cohen tribute arrangement.

Elbio:  Well as you can tell from my accent I am not exactly from here.  I’m from the south, but very south, like 10 thousand miles south, from Montevideo, Uruguay.  And over there we have a very active Rock and Pop scene, as well as our own Tango and Folk music, etc.  And I always loved songwriters like Leonard Cohen and Bob Dylan, and I have been a fanatic of Leonard Cohen for my whole life. I was really sad when he died, and even more sad because he died in these circumstances.   Julia came up with the idea of doing one of his songs, one of his most recent songs in this broadcast and I immediately said yes.

Julia:  But there are not too many people who have the gravitas to do that song and really have the connection to it.

Was that the premiere here on Airplay?

On that note, I’m wondering how you guys compose and arrange?  Is it a very collaborative process?

Julia:  Well those two compositions came from a live, improvised show that we did and recorded, with Tim Davis actually.  We improvised those as a group on the spot and ended up forming them into tunes and have used them as tunes in various ways ever since.

Elbio:  That’s one of the procedures.  Julia and I are both composers, working with symphonic music and chamber music.  And we do some structured music.  But one good thing about this band is we don’t need to write so much, we write a lot for other things.  In this band, what we normally do is bring in some little idea and develop the idea with the band or we just improvise something, we like it, and we try to repeat that and keep it.

I saw you guys are in the studio recording some new material.  What projects do you have on the horizon?

Elbio:  Yes, we have a few projects in the oven right now.  I have been working with Paquito [D’Rivera] for like 15 years, 20 years in different projects – chamber music, Latino music.  Finally, he was coming to Chicago and we decided to do a recording session and it went great.  But, we still need to mix that one and work a lot in postproduction.  But we have a live CD that we are trying to release by the end of this year, or the beginning of next year, most likely.  And on March of this past year, we released our duo CD, called Electro Parables or Parábolas Electricas.  That one is up and we got great reviews.  It’s a record we did in-studio, Julia playing guitar and synthesized guitar and I’m playing all the things I play.

Julia:  That was a long form, structured improvisation for us.  So the whole piece, especially the first piece, Two Hundred Years of Solitude is one take and then a few overdubbings.  No editing or breaking or anything like that, it’s all one large take.

We have it here in the stacks.  Electro Parables is a great recording if you haven’t checked it out.  I want to thank you for joining us, it was really a pleasure.

Julia:  Absolutely.  Thank you for having us, it was our pleasure.

Elbio:  Thank you very much