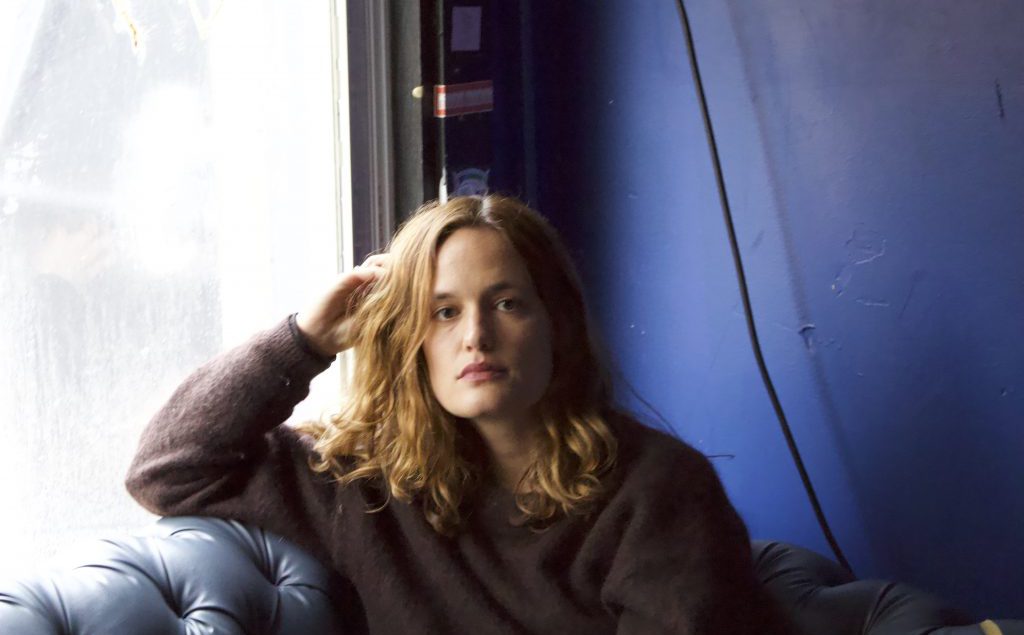 Kelly Zutrau is the driving force that keeps Brooklyn duo Wet running. She writes and provides vocals on every track and even tried her hand at interpretive dance in the music video for “Lately.” Off the stage, Zutrau prefers comfortable clothing and has the laid back demeanor of someone you might meet at a Brooklyn coffee shop.

WNUR had a chance to speak with Zutrau about a potential acoustic album, Twitter generosity and female empowerment.

Wet was originally formed in Brooklyn but you took the band to Western Massachusetts to record your first album, Don’t You. Would you say the band identifies more with the Brooklyn sound or the Massachusetts sound?

Definitely the Brooklyn sound. I think we fully formed in New York and we were playing shows and getting our first demos together in New York and…the seed was started there. The reason we went to Massachusetts was more just to isolate ourselves and try to focus in on making something cool. We happened to know of a house out there and it really could have been anywhere.

This isolation strategy has been coming up more and more in music- I know Kanye [West] went to that secluded house in Wyoming to record last summer. Did you find that seclusion aided the creative process?

Yeah, looking back I think it was really good. We didn’t really do that for our most recent album and I’d like to do it again.

Your most recent releases “Old Bone” and “Trust No Man” were more vulnerable songs which have a more folksy feel to them than your previous projects. Is this pivot indicative of what’s to come for Wet? Or was it more of an experiment?

We had these two tracks that felt very acoustic and they worked well together and they didn’t quite fit on the album. We liked them and we wanted to put them out but I don’t think that we’re moving into making only acoustic music or anything like that. A lot of the songs start that way, though, sounding folk-y and acoustic. Then Joe produces them out and makes them sound more electronic, so they head in that direction. We kind of just wanted to release those as is.

Do you have any plans to release an all-acoustic album?

I think that would be fun. It could be really cool to release an acoustic album at the same time as an electronic album, almost in tandem with each other.

You incorporate a lot of different genres into your music. How would you personally describe your sound? Is there a specific genre you would use?

I never feel comfortable attaching myself to any genre, I usually listen to what other people say. I’ve heard R&B, pop, country, people say they hear all those things in our music and I definitely like and listen to all those kinds of music so it makes sense. I think genre is generally a waste of time. I think that the best, most interesting things are taken from a lot of genres or are difficult to categorize. I generally just shy away from it and let other people say whatever they want.

Wet formed in Brooklyn. Are there any particular Brooklyn influences that guided Wet’s sound?

I grew up listening to a lot of very soft rock and soft R&B; that’s what people at my school were listening to. My mom always had Magic 106.7 on [which was] very soft, slow music, a lot of it melancholy and sad. And that’s generally been how I express myself through music: through pretty slow, sad and lonely songs.

I remember when I moved to Brooklyn thinking TV on the Radio was a really cool band and thinking they were defying genres and it was just really weird, interesting music. I love Chairlift, they were also in Brooklyn when I first got there. There’s this woman Kelsey Lu; I find her music to be very inspiring and beautiful. It’s generally pretty slow and soulful and sad and I just think it’s very special.

I grew up listening to a lot of 90s R&B, like SWV, Usher and Destiny’s Child. I’m so in awe of how smooth things sounded during that time, all the harmonies. It sounds godly to me, that kind of music, and I feel like whenever I’m doing vocal harmonies or trying to find the right guitar, I always put on a sad 90s R&B song to inspire me.

You’ve talked about sad, soulful music as the primary sound for Wet. I’m curious about the track “You’re Not Wrong,” which departs from that sound with some more powerful, authoritative vocals.

I wrote [You’re Not Wrong] on the autoharp and it started out really slow and sad and it was almost like a country song. Then I took it into the studio with Rostam Batmanglij from Vampire Weekend and he kind of pushed it in that direction. He put down these drums, and started playing this fast, crazy piano. I thought it was really exciting and I had never heard a Wet song sound like that.

When we were making this second album, it was an exploratory phase. I wanted to try a lot of different things, work with a bunch of different people, see what Wet could sound like. You can really hear that on the album; “You’re Not Wrong” doesn’t sound like anything else we’ve ever done. And it’s really cool!

On that project, you brought in Rostam, John Hill, and others but previously you hadn’t done a ton of collaborating; Don’t You didn’t have any features. How was that different from just working with Joe?

It’s very complicated working with that many people, it’s hard to make it cohesive. It’s a lot of contracts and phone calls and money and all these things and working out how you’re going to credit each other. It can be so fun but it can also be tiring.

I think that now I feel a lot quieter about music, like it’s so easy to just work with Joe, he lives down the street from me and we know each other’s processes really well. Usually when I make something, immediately after, I want to do the exact opposite. After Don’t You, I wanted to work with everyone else and after Still Run I kind of want to go back to it being more insular and quiet and less complicated.

Who would be your dream collaboration?

I kind of had one recently, I worked with Toro Y Moi on a song and he’s someone who I’ve loved for a very long time and I was so excited when he asked me to be a part of his album. I love what he did. We’re actually going back into the studio in a couple weeks to work on Wet stuff.

On this tour, you’ve been very generous on Twitter by hooking people up with passes. What motivated you to reach out to those people?

We know that tickets are expensive and we’re always fighting against agents and venues to make tickets cheaper. Tickets end up being like $30 and we know not everyone can afford that.

We never want [our shows] to be an exclusive thing in any way. If we could eliminate money from the equation, we would, you know? It’s such a bummer how expensive it can be. We know it’s not a perfect system so we’re always trying to get people in if we can.

Do you think that strategy will continue if Wet starts to blow up and ticket prices get really high?

I think we will always do that. Probably even more so: as it becomes a higher price point, we’d really make a point of it. That’s my worst nightmare, a show where only rich people are there. That sounds like a shitty show.

How has it been touring with Kilo and Hana Vu?

It’s been great! From the beginning, I really wanted this tour to be all female-fronted acts. [Kilo and I are] pretty different, but I think there is a connection there. She’s much more electronic and dance-y and we’re definitely a little slower and rock-ier live. Hana, I think, is a perfect middle point.

I think it’s really important to make a point to reach out to women and try to have as diverse a show as you possibly can in every way. I think generally the people who get offered shows are white dudes and it’s important to actively try to give other people a platform and have other voices be heard. I’m really happy with the tour, I think everyone’s getting along and I think it’s a really interesting show.

Anything on the horizon for Wet besides finishing up the tour?

[We’re going to keep] working on music and keep putting music out. That’s it for now.

We’re on a US tour right now and there are still tickets available! We’re about to be in the Midwest this week and then the West Coast. So if anyone wants to come to the shows, you can go to wet.band and the tickets are all there. And if you can’t afford tickets, try DMing us and we’ll try to get you in.