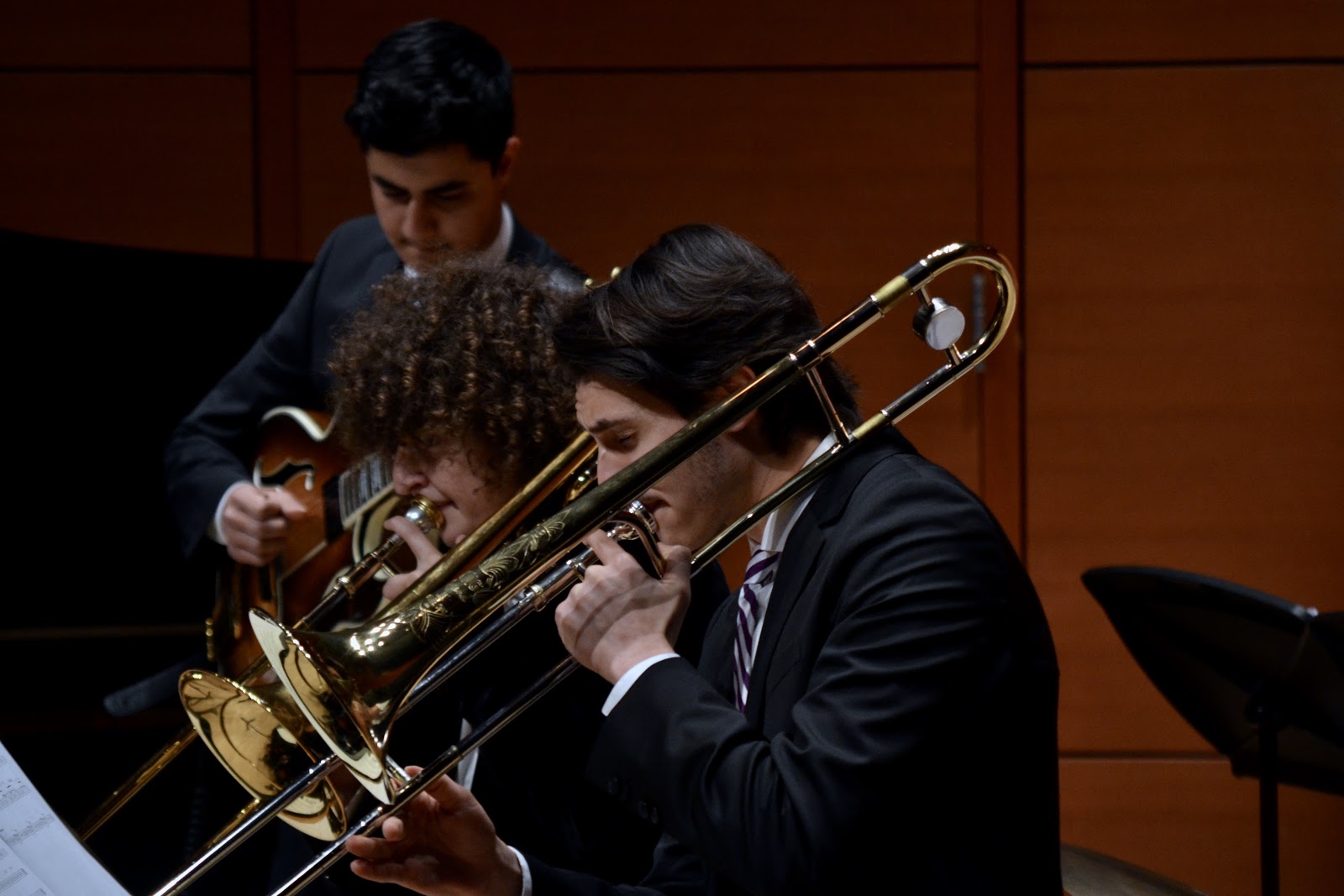 CHICAGO — Around this time last year, an eager audience populated a recital hall inside the main building of Northwestern University’s Bienen School of Music to watch a quaint student recital. It was a reminder of what, at the time, had resonated with me as the charm of live jazz. Now, I sit at my kitchen table, watching masked instrumentalists produce music that bounces from earbud to earbud instead of from wall to wall of the auditorium. It’s an almost mocking testament to the monotony of this pandemic. But the innate dullness that comes with listening to music through a computer speaker was shattered by artistic candor and virtuosic pride offered by Bienen School students and their instructors in last week’s presentation of small ensembles.

This year’s virtual version of the jazz department’s typical small ensembles recital, broadcast on Thursday night, upheld the program’s unofficial reputation as one of the greatest showcases of student talent the school offers every year. The two ensembles, spearheaded by Chicago-based jazz pianist, composer and Bienen School lecturer Kevin Fort and Bienen School Director of Jazz Studies Victor Goines, respectively, each pulled off an engaging show despite missing a few first- and second-year students who were not allowed on campus due to the university’s COVID-19 regulations.

The live-streamed video opened with a shot of Chicago-based jazz pianist, composer and Bienen lecturer Kevin Fort, flanked by trombonist Joe Nedder and bassist Robin Steuteville, all sharing the stage at the university’s Pick-Staiger Concert Hall. The three masked performers promptly launched into Fort’s arrangement of Bernice Petkere and Joe Young’s “Lullaby of the Leaves,” which was riddled with interjecting dialogue between Joe Nedder on trombone and Kevin Fort on keys.

Steuteville said her arrangement of Thelonius Monk’s “‘Round Midnight” was inspired by an imaginative scene of a clock striking midnight on a note that would just happen to be E flat. Naturally, the piece opened with one repeating chord on the keyboard, mimicking the sound of a clock’s chime and patiently welcoming the lament of Nedder’s trombone. The composition walked an uneasy stretch that released with Fort’s trickling keys and Steuteville’s poignant, straight-toned bass.

Joe Nedder’s “Change of Pace,” which he said he designed with layered melodic lines in mind to create a “unique texture,” made its entrance as the first original student composition of the program. It led an immediate dive into parallel melody executed with satisfying, energetic clarity — bass and trombone playing in unison while the piano doubled the same line in octaves. The composition was an abrupt transition from the two pieces it succeeded, carried by a fiery trombone solo which Nedder ornamented with riffs and effortless punctuation all while a bouncy bassline uplifted the piano’s cascading eighths.

Fort’s “I-65” paid tribute to trombonist J.J. Johnson as a contrafact of the latter’s “Lament,” originally a solemn, thoughtful monologue accompanied by light percussion and a delicately layered harmonic line. Fort’s transformation of the piece into a loose bossa nova cushions a central trombone in its reimagined “lament.”

The end of a twenty-minute intermission brought about the Victor Goines ensemble, comprised of Goines on baritone saxophone, Albert Kuo on soprano and alto saxophones, Sean Deegan on tenor and alto saxophones and Austin Klewan on tenor saxophone. They presented Goines’s own “No Shuckin’ and Jivin’” with flattering attention to its textured, layered harmonies. Kuo, on soprano sax, laid out a melody identifiable by sharpness and fluidity, with a precise solo that riffs up and down the scale avoiding tonic until an exciting moment of resolution.

Kuo’s arrangement of Monk’s “‘Round Midnight” gave the piece a second program appearance after Steuteville’s interpretation of the same standard earlier in the evening. His arrangement, described by the quartet’s Klewan as an observation of the “darker” side of midnight, served as a commentary on the weight that individual interpretation carries of a piece carries in music, specifically in jazz; Kuo’s and Steuteville’s arrangements of the standard shared nothing apart from their origin. Kuo played around with time and tempo and circled back to what seemed to be a recurring theme in the night’s program: parallel instrumentation as melodic doubling.

A sweetly slowed down “Adam’s Apple” by Wayne Shorter, arranged by Bienen first-year Sean Deegan, was followed by Goines’ emotional compositions, “Fluidity” and “This Is Who I Am,” two pieces brought to life by fluent saxophonists and, in “Fluidity,” augmented by the buttery tone of the trombone’s comeback for the program’s second half.

The program ended on an unorthodox note — a choice by Klewan to arrange a Beatles hit, “I Feel Fine,” upheld by a jaunty bass line that carried smooth but unrelenting upper melodies executed with perfect synchronization.

In a moment when artists broadcast concerts on social media live streams or ticketed Zoom meetings, the boundaries of “live” music seem to constantly shapeshift. But even without acoustic help from the walls of Pick-Staiger, Bienen’s jazz cohort once again managed to reassure that the genre’s charm remains resolute.