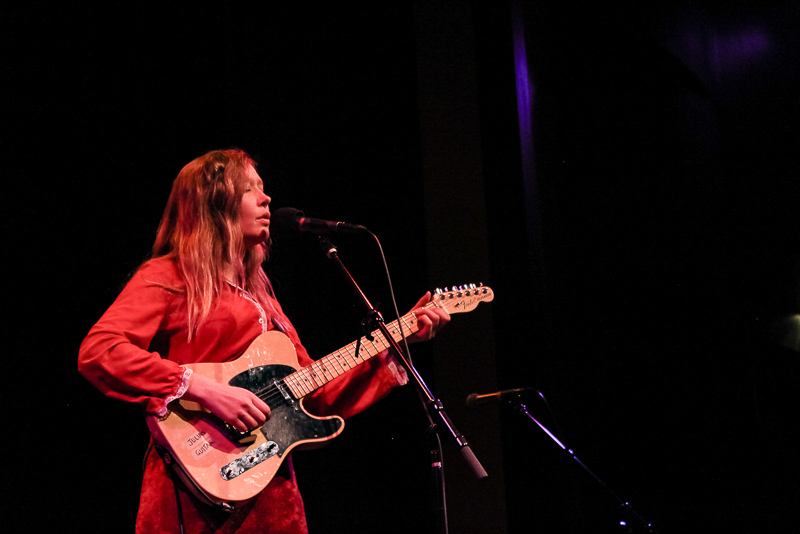 Alone, Jacklin opened with “Comfort,” the last song on her 2019 release, fittingly titled Crushing. The lyrics read like a guide to coping with a breakup (“You’ll be okay/ You’ll be alright/ You’ll get well soon/ Sleep through the night”) sprinkled with self-reassurance (“He’ll be just fine/ Hurt for a while/ Cured with time”). “Comfort” is ironically uneasy, with Jacklin convincing herself everything is okay. “Don’t know how he’s doing/ But that’s what you get,” she tells herself. “You can’t be the one to hold him when you were the one/ Who left.”

The audience, seated in chairs distanced from the stage, sat silent and motionless, then erupted in applause as the band crept in for “Body,” a dark-sounding slow-burner in which Jacklin reflects on a nude photo taken by someone with whom she is no longer romantically involved. She ponders, “Do you still have that photograph?/ Would you use it to hurt me?”

Drummer Ian Kehoe maintained a perfectly stagnant backbeat throughout the five-minute song as Jacklin repeated the hook, “I guess it’s just my life/ And it’s just my body.”

So much of Jacklin’s music is about stillness. In softer moments, the band restrained itself, emphasizing Jacklin’s poetry. But when they ventured into Jacklin’s upbeat songs, “Cold Caller” and “You Were Right,” the guitar kicked into overdrive and the drums spiked in volume.

A high point in the set was “Turn Me Down,” which opens with an eerie guitar riff drowned in vibrato. In the verses, Jacklin realizes she may be more invested in a budding relationship than her partner, singing softly, “He took my hands, said I see a bright future/ I’m just not sure if you’re in it.”

Midway through the song, the entire band dropped out and Jacklin slowly entered with soaring vocals, repeating, “So please just turn me down/ Oh please just turn me down.” The drums gradually ramped up as the lead guitar began riffing over the same two chords. The tempo picked up and Jacklin broke into a near-scream, but just as the audience anticipated an emotional release, a break of tension, the band fell silent once again.

“Turn Me Down” finishes with the heartbreaking, “Maybe I’ll see you in the supermarket sometime,” and then dives back into its unsettling intro guitar riff, bringing the song full circle.

Jacklin commented on the awkwardness of the seated venue, saying it reminded her of when she used to play “Wonderwall” at school assemblies. “I could play some Oasis songs right now,” she joked, “but I think you’ll all enjoy this better.”

Leading into the final stretch of her setlist, Jacklin encouraged the crowd to participate if they wanted. “I don’t want to be that guy that’s like, ‘Sing along,’ because if I go to a gig and someone’s like, ‘Put your hands in the air,’ I’m like, ‘No, I will NOT!’”

The band closed its set with the two most upbeat songs on Crushing, “Head Alone” and “Pressure to Party.” In the former, Jacklin sets physical boundaries in the cathartic outro (“So I’ll say it ‘til he understands/ You can love somebody without using your hands”), while in the latter, she discusses the pressures of reentering the romantic market after a breakup (“Pressure to learn from being alone/ Pressure to not leave it for too long/ Before you find another heart where you belong”).

Jacklin and Co. walked off stage to a standing ovation before returning for a two-song encore headed by the introspective ode to growing up, “Don’t Let The Kids Win,” and a cover of the nostalgic Avril Lavigne song, “I’m with You.” The entire audience remained standing for the encore.

There’s a certain magic in Jacklin’s music and performance — a mix of brilliant tranquility and unbridled catharsis that, bar the applause in between songs, kept a sold out audience completely still and silent.