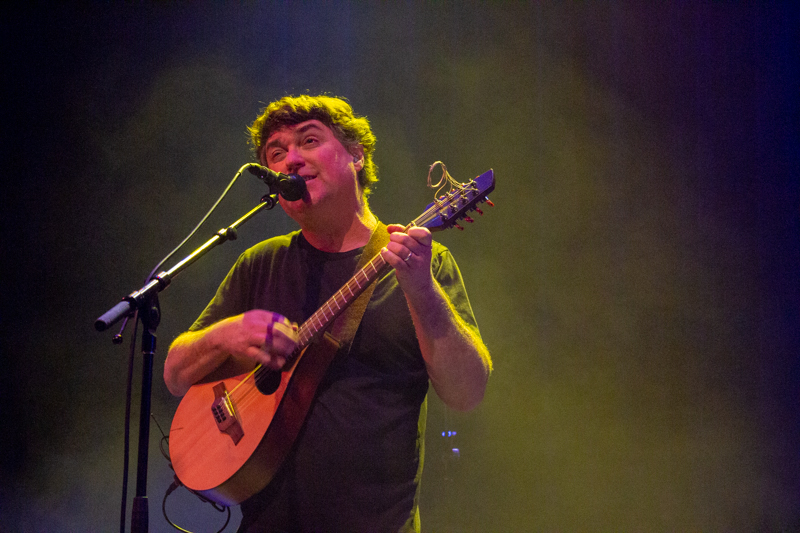 Three words you’ve probably never heard together: Appalachian psychedelic bluegrass. I’m not sure what thoughts that brings to your mind, but it definitely had me more than a little bit excited for my opportunity to see Keller and The Keels at Park West. And after the fact, I couldn’t think of any three words to better sum up the evening.

Keller Williams is a Virginia native self proclaimed ‘one man jam-band’ who uses loops, pedals, and other effects to make his solo performances feel like full on multi-instrumentalist jam sessions in a room full of people. But despite his solo talents, he often tours and collaborates with other folk and bluegrass minded artists such as The String Cheese Incident, Umphrey’s McGee, and tonight, the husband and wife duo Larry and Jenny Keel.

After stepping into the venue I was immediate assaulted with all the sights, sounds, and smells that you might expect from a grateful dead cover show crossed with an Apres ski bar: old couples covered head to toe in tie dye already swaying to the pre show loudspeaker music, loud conversations about the long list of other Keller shows people had witnessed, and more IPAs and dab pens than I’ve seen in my life. The crowd was undoubtedly ready to jam.

As Williams floated onto the stage, barefoot — with scruffy hair and a childlike grin across his face — the crowd exploded into cheers and whoos. He opened with a bluegrass rendition of Amy Winehouse’s Rehab as Larry and Jenny Keel took the stage in support on guitar and stand up bass. The people standing around me immediately broke into movement that I wouldn’t exactly call dancing, but was definitely meant to be in time with the music. Their set consisted of an intricate mix of clever bluegrass covers of everything from Island in The Sun, to Another Brick in the Wall mixed in with some originals along with some outright wild moments that I can only describe as soundscapes where Williams was playing pedals and loopers with his feet as much as he was playing his guitar (and one solo where the only instrument was his voice).

Even though I wouldn’t say that bluegrass or folk are two of my favorite genres, there wasn’t a moment throughout the whole night where I wasn’t having fun. No one puts it better than Williams himself in an interview with Blount County’s Daily Times: “There’s a real sense, when it’s all working, that the audience and myself, we’re all getting away with something. We’re all doing something really bad and illegal, and we’re getting away with it, because something this fun usually is.” Whether it was the moments where he had the whole crowd singing the chorus with him, or when we were all equally enamored by the range of sounds coming out of just three acoustic instruments, it felt like all of us in the audience had a chance to be part of something special as a participant and not just an observer.