Sarah Bonito, lead singer for Kero Kero Bonito (KKB), wore bracelets that hung a chain from her wrists to her elbows during KKB’s performance at the Vic Theatre. It seemed like another quirky fashion choice that goes along with the band’s look, a mix of bright colors and rock aesthetics. Toward the end of the show, Sarah explained the meaning behind the chains: “I wear these chains,” Sarah began, “because I own myself.”

Richly colored strobe lights and thick machine-generated smoke lit up the Vic’s stage for Negative Gemini, KKB’s opener. Her heavy use of echoes and reverb made her music sonically engulfing. Once she got the crowd at the Vic engaged, she delivered a mix of pop vocals and rock that set the mood for the night. Negative Gemini in a Twitter post before the show described the night well, tweeting: “this tour is drippy lol.”

Sarah and her bandmates Gus Lobban and Jaime Bulled (who go by kane west and Wharfwit, respectively) have combined to form a discography including a wide array of sounds and styles, which were on full display at the Vic. Their set was full of many twists and turns. 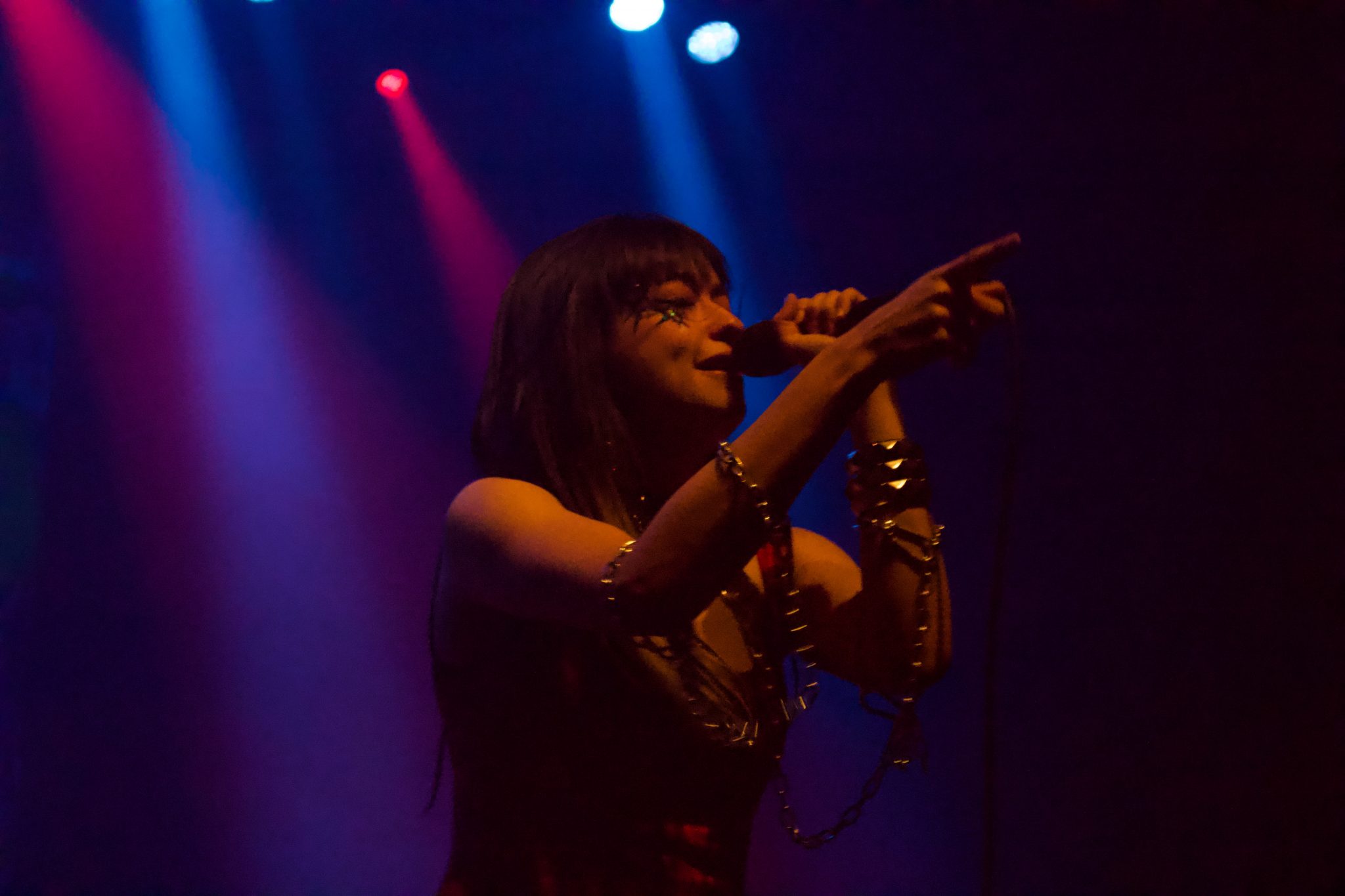 On “Flamingo”, one of the trio’s most-streamed songs, KKB delivers a bubblegum-pop-inspired anthem with a not-too-obscured message of accepting oneself. The studio version of “Flamingo” is not my cup of tea. As one of their earlier singles, it is less developed version of sounds they later improve. But performed live, with the audience hopping along the whole time and Sarah bringing out a stuffed flamingo that she waved along to the beat, “Flamingo” was undeniably a fantastic mood setter.

With their 2016 debut album Bonito Generation, KKB cements themselves as talented songwriters who blend joyous, sweet, and fun music with subtle, but meaningful lyrics. On the band’s performance of “Break” from that album, Sarah called her bandmates onstage using an oversized plastic phone. Gus answers, “You’ve reached Gus and Jaime from KKB. We’re recording right now so please leave your message after the beep,” after which Sarah responded saying, “Yo Gus and Jaime, It’s Sarah. Just to let you know, I don’t want to do anything today, so I’ll see you later. Bye!”

The sounds off KKB’s following project, the 2018 album Time ‘n’ Place, are more rooted in traditional rock sounds than their previous work. My favorite track performed from this album has to be the 2-minute stripped-back “Sometimes”. During the performance, Sarah asked everyone to get out their phone lights and wave them side-to-side. The song subject covers the universal feeling of knowing that things go wrong and sometimes “life doesn’t make sense.”

KKB also played tracks off their new 3-song EP Civilisation I, which is their version of synth-rock. With how much mastery of a wide variety of sounds that Kero Kero Bonito has already displayed, there are countless musical directions the band could go, and I’m confident they’ll do well with whatever sound(s) they choose.

KKB is an exciting band willing to take their music in many directions and they are all the better for it. Their stage presence exemplifies these same fun, experimental qualities. At one point Sarah introduced a song by asking, “Did you know cheese gives you nightmares? This next song is about cheese.” I hope to see Kero Kero Bonito perform in the future with new, likely great, music and many more insightful song summaries.

Now with more pizazz, rock and just as much heart: “Only Acting”, “Battle Lines”