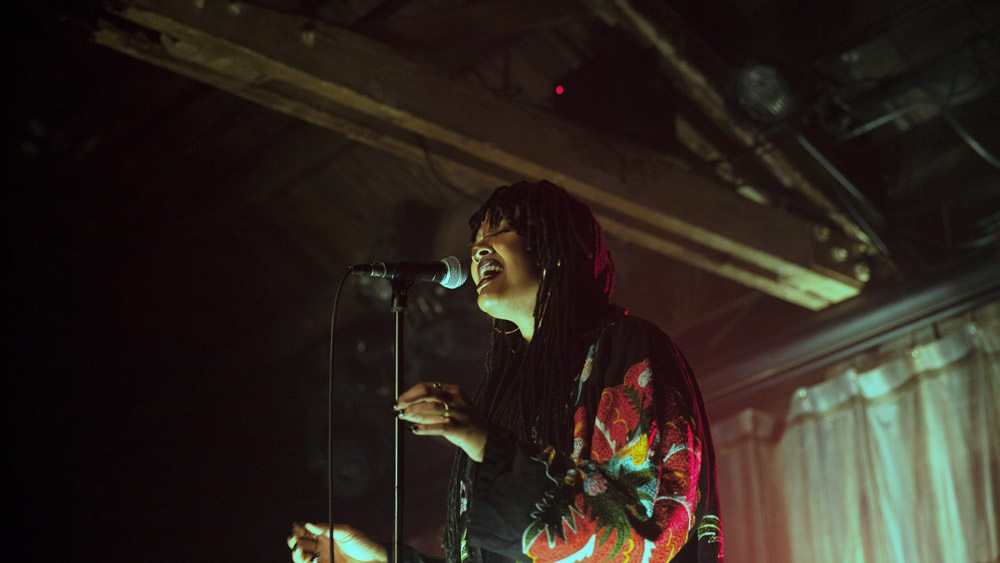 Tracks from Erykah Badu’s Worldwide Underground fill Evanston’s SPACE tonight as audience members mill about in anticipation.  An older man parades by in a straw hat, a floor-length gingham tunic and a distressed denim jacket.  Another audience member leans up against the bar wearing a white tee and a grey vintage military officer’s hat.  Clearly the crowd here tonight is one with an appreciation for the aesthetic; they embrace pairing old with new, familiar with foreign.

KING, an alternative R&B trio made up of sisters Paris and Amber Strother and their “musical sister” Anita Bias, rolled into SPACE on October 11 as part of their two month long tour across the country. Riding high on a wave of critical acclaim for their February 2016 debut We Are KING, the LA-based group has been touring on-and-off for the past nine months, making a stop at SPACE less than a week after the album’s initial release.  After their first EP, The Story, came out in 2011, KING slowly gained attention, acclaim, and avid followers as they released several more singles over the next five years.   With excitement surrounding each step of KING’s musical journey, it was clear that the crowd at SPACE was eager for Paris, Amber and Anita’s signature lush, soulful grooves.

After a tight, sample-laden set from up-and-coming crooner Nick Hakim, KING floated on stage wrapped in beautiful, intricately quilted floral robes.  Opening up with “Mister Chameleon,” the trio fueled audience excitement with their upbeat melodies, hand-clapping, and vigorous bass lines.   They continued the pace with an audience favorite, a sure-footed, sleek version of their single “The Greatest.”

It is tempting to refer to the group as the KING sisters—their smiles and encouraging glances convey a unity and mutual admiration that only sisters could have. Often referring to themselves as “musical sisters,” it is this familial love that translates into tight harmonies and intricate vocal arrangements.

The night progresses with more songs from We Are KING: “In the Meantime” and “Love Song,” KING’s favorite song off the album according to Amber Strother.

Taken together, the two songs truly show the depth of KING’s influences.  Their twinkly synths and echo-y, distorted vocals sound like things you might hear on an R&B or funk song from the 80s’ or 90s.’  Later, they cover “Computer Love,” the 1985 hit from Ohio-based funk band Zapp, long-time champions of synth-laden, bass-heavy music.

Despite the clear connections to music from earlier decades, though, KING manages to avoid sounding dated.  Their music transports you to a hazy dreamland infused with the music of the 80s’ and the heat of the tropics. Dense and lush, their songs possess a familiarity brought about by musical elements from the past, but one that is inviting rather than stifling.

With bright, jewel-toned lights shining on their floral robes, Amber Strother, Anita Bias, and Paris Strother clearly have a grasp on how to translate the images and ideas from their music into a sleek, multi-sensory live experience.

What makes KING’s show so alluring, though, is the love they have for each other and the appreciation they have for their audience—it adds a warmth that no amount of colorful lights or cool outfits could replicate.

Armed with a sense of identity and self-assuredness that only longtime “musical sisters” could possess, KING knows where they came from and where they are going.  With the warmth and love they radiate to their listeners, it’s clear that fans will follow them wherever they end up.