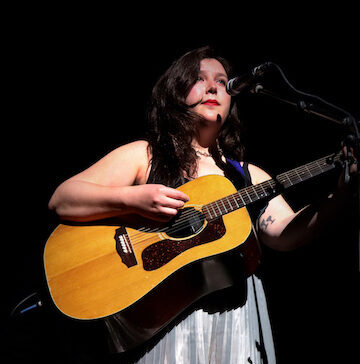 Adrenaline consumed me as I ran through the rain to get inside The Vic. I felt a sense of normalcy as soon as I set foot inside the concert hall, which was beginning to fill with people who were excited to see Lucy Dacus perform live. For many of us, this was our first concert since the COVID-19 pandemic. And I can’t speak for everyone, but I definitely missed live shows.

The crowd erupted as Lucy walked on stage with her guitar. “We’re without our guitarist tonight, so we are doing some things differently,” she said. Although we were back in a venue, the coronavirus still loomed in the background, as the singer had to cancel a few shows prior because a member of her touring party tested positive for the virus.

Typically, the concerts I have been to in the past were over-the-top, with the artists jumping around on stage in an attempt to energize the audience. However, Lucy didn’t need to do that. Her enchanting voice was enough to capture people’s attention. Starting the show off with a solo version of “Trust,” Lucy strummed along on her guitar as the audience watched silently but intensely, clearly mesmerized by her singing.

She continued with a few songs from her latest album Home Video, one I wouldn’t be surprised to see on several “Best of 2021” lists. As she sipped on her tea, Lucy nervously announced to the audience that she was going to do a cover that she has never performed before. The crowd cheered in encouragement, and Lucy began to play “Summer in the City” by Regina Spektor. She then transitioned to a solo performance of “Partner in Crime,” which is something she also had never done before – presumably, though, she altered the performance from previous nights due to the absence of her guitarist, Jacob. The acoustic performance was a stark difference from the studio version of the song in which Lucy’s voice is altered with auto-tune. I thought the stripped-down version enhanced the emotional storytelling Lucy showcases through her brutally intimate lyricism, something that is characteristic of her entire discography.

“We need some serotonin,” Lucy bantered before jumping into my favorite track on Home Video, “Going Going Gone” – singalong style. Continuing with some more songs and a cover of Bruce Springsteen’s “Dancing in the Dark,” she ended the night with the song I was most excited to hear live, “Night Shift.” The opener, Bartees Strange, joined on guitar in lieu of Lucy’s missing guitarist. The audience’s singing grew louder as the song built up to its epic finale. By the end, everyone was screaming at the top of their lungs, “You got a 9 to 5, so I’ll take the night shift / And I’ll never see you again if I can help it / In five years I hope the songs feel like covers / Dedicated to new lovers.”

There is a meme of Gwenyth Paltrow talking about Goop in which she says, “I laughed. I cried a number of times. I sweat, I danced, I got a shot, I ate and I had many epiphanies.” Oddly enough, that pretty much sums up my concert experience.