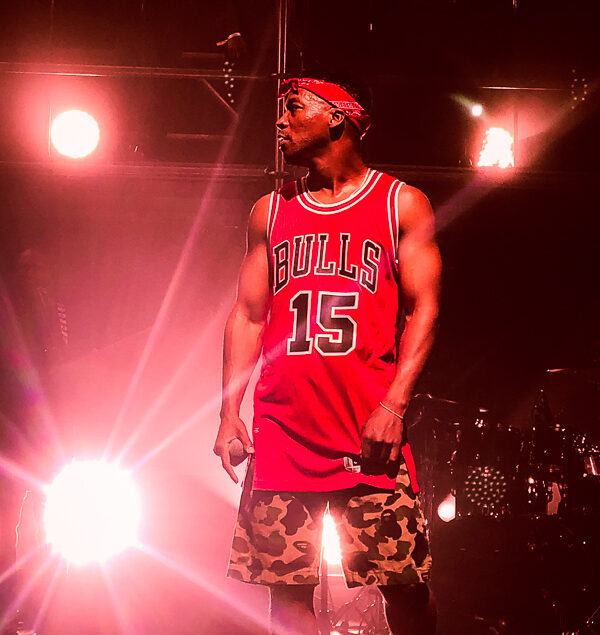 Thirteen years ago, 24-year-old Wasalu Muhammad Jaco, from housing projects in East Garfield Park, Chicago, released his debut album, Lupe Fiasco’s Food & Liquour. Since then, Lupe Fiasco has cemented his place as one of the most talented lyricists of our time, with a passionate following and appreciation despite never achieving wide commercial appeal. Food & Liquor established the hip-hop outsider as both a conscious and quirky rapper, delivering tracks the likes of which casual hip-hop fans don’t encounter. The title refers to the dichotomy of good and evil powers at play in society, and on the record Lupe raps about American terrorism, consequences of a father abandoning his family, and a misfit skateboarding love story.

On November 21, 2019, Lupe Fiasco delivered an impassioned performance of his debut album to his hometown fans at the Riviera Theater.

After waiting through two hours of questionable openers, the crowd roared when a screen with the spacey backdrop from the album cover descended onto the stage. When the initial commotion subsided, Lupe’s sister Ayesha Jaco stepped over to the mic to deliver the powerful spoken word that is used as the opening for the album. After detailing the tangible tragedies of society today, she ended with the line, “God has another solution, that has evolved from the hood. I present one who turns, the Fiasco, to good…”

The beat to “Real” immediately came in and the Fiasco burst onto the stage, wearing a custom “Lupe Fiasco” Chicago Bulls jersey, for the opening chorus. Lupe was surrounded by metal scaffolding on which the backing vocalists and band were perched, creating an intimate and surreal feel. His intensity, coupled with the live instrumentation, was infectious.

He was running around the stage, emphatically shouting lines and jumping as if being thrown by the beat of the song. By the time the anthemic second track “Just Might Be OK” was over, sweat was visibly dripping from the 37-year-old’s face. He never let the energy falter and remained animated, kicking and pushing and coasting as the audience waved their hands along to “Kick, Push.”

Fiasco took us track by track through his debut album with almost no breaks, and he maintained energy and sharp delivery of each intricate verse as the crowd stayed with him. It was amazing how many people in the audience were keeping up with his bars, and it just goes to show how devout his long time fans are.

The band serenaded us with the dreamy instrumentals from “Sunshine” as Lupe took a moment after the song to profess to the audience that love is the most important and most powerful force there is, before plunging into the biggest hit from the record, “Daydreamin’.”

During “Hurt Me Soul,” one of the heavier tracks on which Lupe contemplates the part of rap music and injustices facing different kinds of people, he spoke his mind at length. Food & Liquor, he said, is a motivation for change.

“It’s not a blueprint. It has its flaws, but hopefully it can push some y’all in the right direction… You always have a hurt soul that can’t heal unless you activate and militate toward a goal, with your own two hands and feet.”

Thirteen years after detailing the things that hurt Lupe’s soul, he urged his hometown fans that they have the power to affect positivity and defeat the forces of evil.

He rapped through the last leg of the album as the audience seemed to have a newfound excitement. Once he finished the 72-minute album and had shouted out everybody on stage, paid homage to his longtime manager/partner Chilly Chill — who is in prison — he thanked the audience and wrapped up quickly. He did promise the crowd that next year, when he would do concerts for The Cool, Chicago would be the first one. He made up for doing a Food & Liquor show in LA before Chicago, and the fans forgave him, showering him with resounding screams of praise as he waved goodbye.