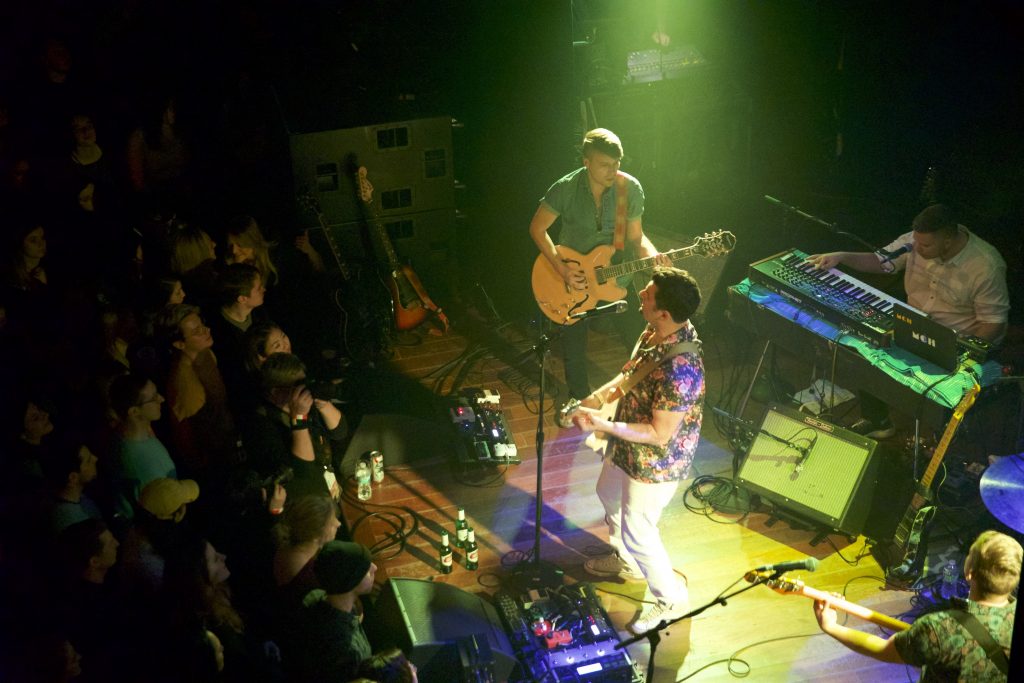 Do they know how intimate they look? As the lead singer of Magic City Hippies Robby Hunter sings into the mic, lead guitar player John Coughlin drops down onto his knees in front of him. In this moment the only person he has eyes for is Hunter. It almost hurts me that Hunter doesn’t look down to meet his pleading gaze.

Averting my eyes from the uncomfortable sexual tension playing out on stage, I took in my surroundings from the back of Lincoln Hall. It was as if I’d walked through the venue doors into a frat house. Hawaiian shirts surround me. Before I can even begin to pull out my camera I feel the all too familiar trickle of lukewarm beer as half-drunk hippie lovers stumble past me into the sold-out crowd.

Hunter’s vocals then jump down a few octaves, recreating the intro of Amine’s smash hit “Caroline.” As white men sling racial slurs into the air during the chorus, my suspicions turn into observations.

Later on in the night, Magic City Hippies continued their set with a cover of NxWorries’ song “Suede.” Aside from the implied racism and sexism of Hunter describing how he calls his women “tricks” and “b*****s,” part of me found it comforting that a band that identifies as “Miami Indie Funk,” as Hunter explained to me after the show, would go out of its way to center black artists in their own set. That is, until I did just a little more research.

In a profile done by the publication Relix, Hunter described his aversion to making his music too political. “I don’t want the band to be political. [When people hear our music], I don’t want them to worry. I want them to escape and feel amazing and dance. We have friends in bands who are really big ‘Trumpies.’ And we may have our little political tit-for-tat here and there, but we’re still friends. You can exist in two different realms and still come together on a different topic. The funk transcends.”

So to re-contextualize my earlier statement, these covers were not about featuring black artists but simply about profiting off their labor for personal gain. Not to be harsh, but to declare funk music as something that could transcend racism and white nationalism makes me wonder if Magic City Hippies don’t have more in common with “Trumpies” than they realize.

Not only did the Hippies utilize covers of black artists, but they also used styles popularized by black musicians to define their sound. While the addition of the “indie” label to their sound recognizes the whiteness that an all-white band brings to funk music, listening to Robby Hunter rap a bad Beck “Loser”-esque verse during the song “Fanfare” further emphasized to me that without funk, without hip hop, without the black artists that pioneered these genres, there would be no Magic City Hippies.

To be completely honest with you I have been a fan of Magic City Hippies for a while now. I listened to their 2015 Hippie Castle EP a few years ago and I really enjoyed the synth-y production and the complementary spacey dreampop jam sections. But in the age of R. Kelly, we can never separate an artist from their art! This isn’t to say that the Hippies are not allowed to cover black artist or be inspired by genres such as funk and soul. All I am suggesting is that they should do so in a way that recognizes their own privilege as a band of white cis men doing rap covers to a room full of white cis men.

Recognizing this privilege means not being complacent when your fans want to support a white nationalist. Recognizing this privilege means calling out your fans when they decide they have the right to use language that has fueled actual racial violence. Recognizing this privilege means questioning why the same people who cheer you on during an Anderson .Paak cover can then go home and support the mass incarceration of people of color across the country. Art and actions always have consequences. The fact that someone can play funk music and not recognize this fact is the definition of white privilege. At the end of the day, what I write will have little effect on their success. But I hope one day Magic City Hippies recognize the people they have the power to influence and stop being too scared and take action.