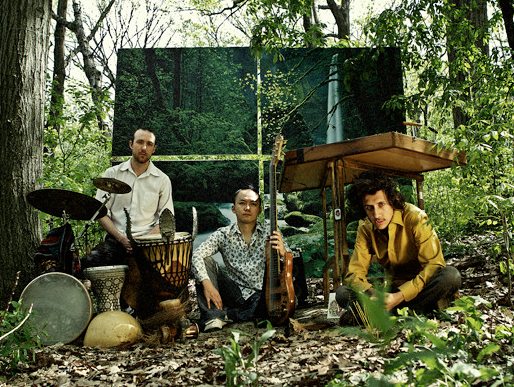 House of Waters; photo used by permission of band.

Continental Drift: In-Studio with House of Waters’ Max ZT by Wnur-Fm on Mixcloud

As a 2011 Chicago World Music Fest alum and former student of Indian santoor master Pt. Shivkumar Sharma, Max, like his bandmates, is a performer, composer, and innovator of his instrument. He spoke with us about how the band comes together to write a song, the musical and thematic inspirations behind their new album, the process of building a hammered dulcimer, and more.

After the interview (about a half-hour in), Max joined me at the board to spin some of the tunes that he and House of Waters have been listening to lately and that have influenced the new album. For instance, the active sabar rhythms of the tama drum as featured on the Ndongo Lo track can also be heard toward the end of House of Waters’ piece “Revolution,” and djembe rhythms such as those on Ba Cissoko’s “Kounkoure” also drive a track like “Chaca.” At the same time, some of Max’s own playing hearkens back to the kora music of Toumani Diabate and Ballaké Sissoko, while the karignyen (metal scraper) as heard in the Wassoulou music of Oumou Sangare is an unmistakable presence on a track like “Clean Peace” (not played here).

Performances included “Raindrops” (from House of Waters’ 2nd release Peace the Coats), “Sense” (Revolution), and, at the end, “Walking Blues” (Peace the Coats). Stay tuned later in the week for video from the set. (Check it out here.)