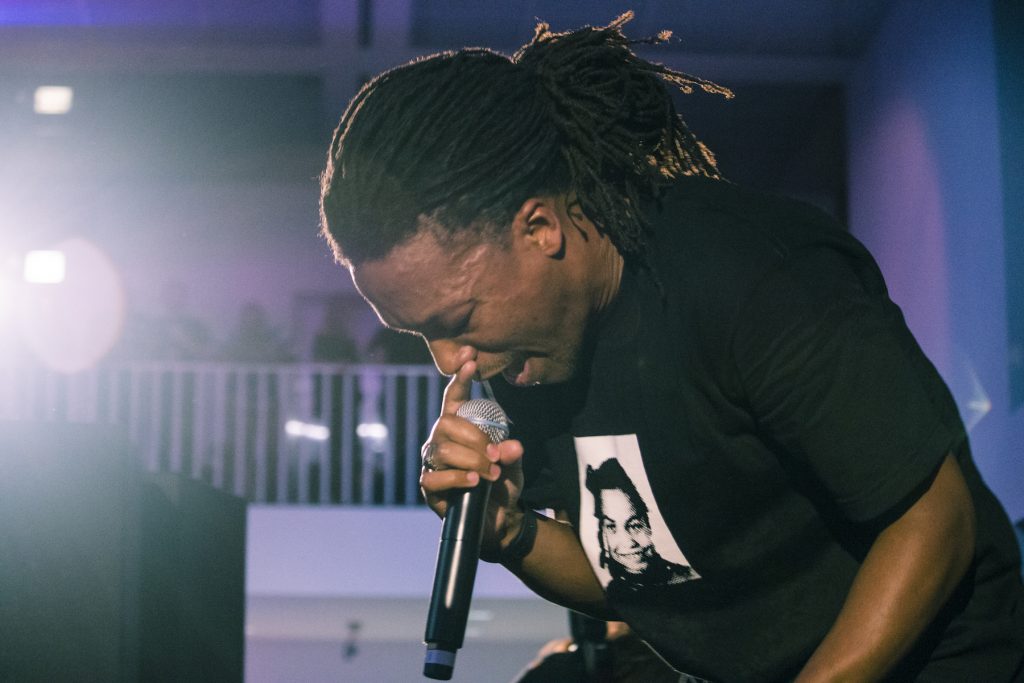 With 50 years of existence under its belt, the Museum of Contemporary Art has consistently been an icon for modern creativity and expression. As someone who went into the event relatively blind and with only a vague understanding of what the artists were like, I came out feeling cultured, livened, and like I could do anything I put my mind to. This, arguably, is the essence of the Windy City itself, and the MCA brought every flavor of Chicago out for anyone to taste. From Avery R. Young and de deacon board’s funky mix of jazz with hymns reminiscent of a Southern black church, to Kaycee Ortiz proudly repping the modern sexually expressive woman.

This wide variety of music and diversity of artists rang true to the MCA’s mission to celebrate the present, pay respects to the past, and look forward to the future. The 50th anniversary event was one that not only was important in celebrating the museum’s existence of half a century but also crucial in shining a light on the up and coming artists from Chicago along with those like Lupe Fiasco whom have already found their way. Seeing these two sets of artists in the same venue brought out a sense of hope unlike I’ve ever experienced before.

Before headliner Lupe Fiasco, there was a number of performers all of which had their own unique sounds but yet maintained a common demanding stage presence that is unique to Chicago performers. First up was Avery R. Young and de deacon board in the theater. The angle of the seats compared to the stage was rather steep, and yet the moment the lights dimmed to a deep blue and Young came on stage to introduce every member of the group by name, the setting felt extremely intimate. Young put a clever funk spin onto classic black songs that many would recognize; songs like, “Sometimes I Feel Like A Motherless Child” that resonated with the hearts of many in the crowd regardless of color. Even more so, the show took several spiritual turns like when one of Young’s backup singers, Megan McMill, had a solo in which she sung “If I Can Help Somebody” and for just a moment as the crowd yelled out encouragements like, “Yes Lord!” and “Sing the song baby!”, I felt like I had left a museum event and had stepped into church. Young and De Deacon Board took classic black Christian songs and turned them into something that everyone in the diverse crowd could understand even while celebrating black culture.

After the theater show, we moved up to the After Hours in the Atrium where DJ CaliXta played a few songs as the crowd well-dressed, relatively young audience trickled in excitedly, ready for the show. The stage here was relatively low to the ground, surprisingly small, and pretty accessible to the crowd. The atrium got packed fast and it wasn’t long until the crowd was getting antsy for the artists to start gracing the stage.

First up was Kaycee Ortiz who had an excellent stage presence and didn’t hesitate to interact with the crowd personally from the start. She started with 30 Dollar Coat which was enough for the crowd to start dancing around, sticking their hands up in the hair. Though the crowd wasn’t extremely hyped yet, Ortiz got them way more excited when she boldly asked, “Who likes to smoke weed?” which elicited quite a bit of response from the audience, so much so that I briefly forgot that recreational use of weed is only decriminalized in Illinois rather than legal. This interesting question was then followed by her unapologetic performance of “Tam”. 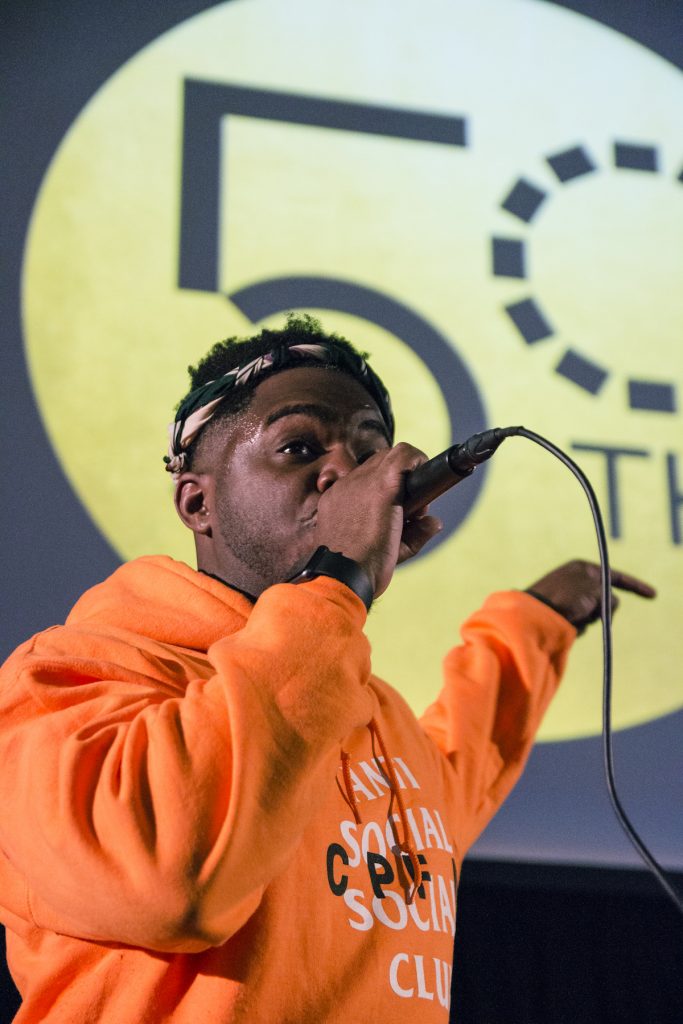 Following up was theMIND who took the crowd from jumping around and singing excitedly to a slowed down, more laid-back vibe with much more relaxed, alternative type of R&B. Unbothered by the fact that not everyone would know who he was or of his music, he played one of his more popular verses from, “Sunny Duet” with Noname. He then took the time to tell his touching story of how he had met Lupe Fiasco in an airport a few years ago and promised that someday he’d open up for him, and that his promise had been fulfilled as he was opening up for him now. It was with that that he strongly encouraged the crowd to chase after their dreams unapologetically before strongly wrapping up the stage and leaving the crowd dying for more.

The moment Lupe Fiasco stepped on stage, the crowd’s excitement shot through the roof, with nearly every person in the venue singing along to the songs he played and even throwing out a few suggestions of their own that he gladly took. He started out with his newer song, but nothing quite excited the crowd like his old songs and so when, “Superstar”, “Touch the Sky”, “Kick Push” and “Daydreamin” came on it was nearly impossible to hear Fiasco himself. He took great control of the crowd and stage, jumping around here and there, standing on speakers, and even pulling a couple of women on stage, though he deemed the first to be too young. The connection between Fiasco and the crowd was riveting and insanely personal as he even took the time to tell the story of how his father told him once that if they were to put all of the buildings of the Chicago skyline together it would form a transformer. Lupe then went on to mention that if they put all of the buildings together now the MCA would be a toe, and then Trump tower would be the penis, though he quickly switched back and claimed it’d be the asshole instead. Fiasco wrapped up with “The Show Goes On” which immediately gave the crowd one last boost of excitement.

All in all, I can’t help but give full props to the MCA for putting on such a well-rounded, and more importantly, diverse concert. There wasn’t a single lull during the concert, and it’s hard to believe that such an event was free. Each artist was amazing in their own right and showed a color of performance that is unique to Chicago, and one can only wonder about when such talented, diverse people will be under one roof again performing. 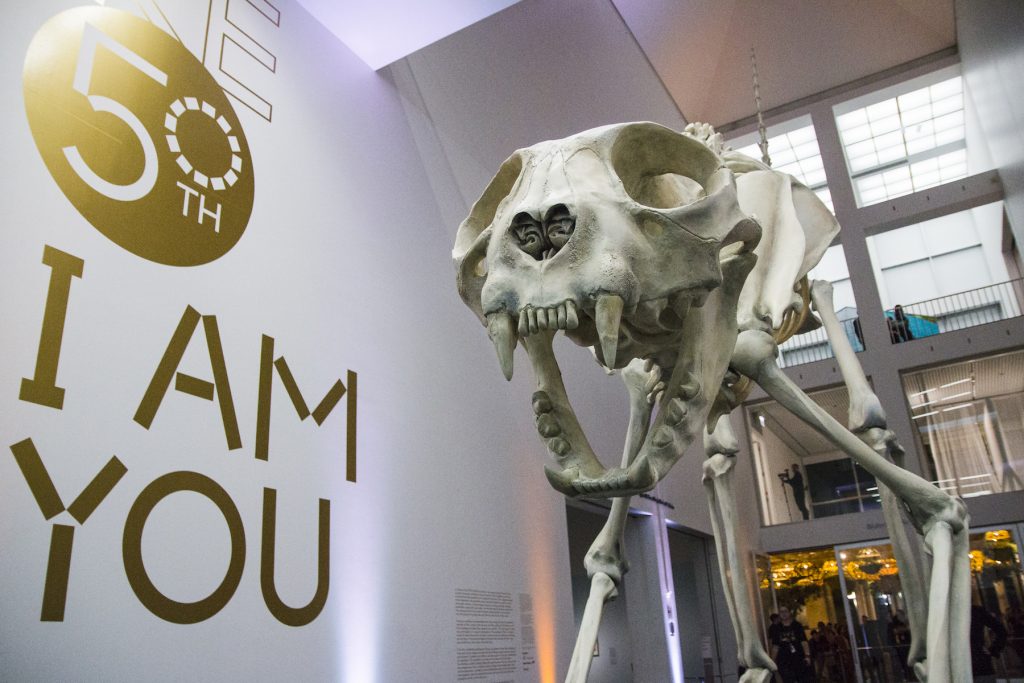