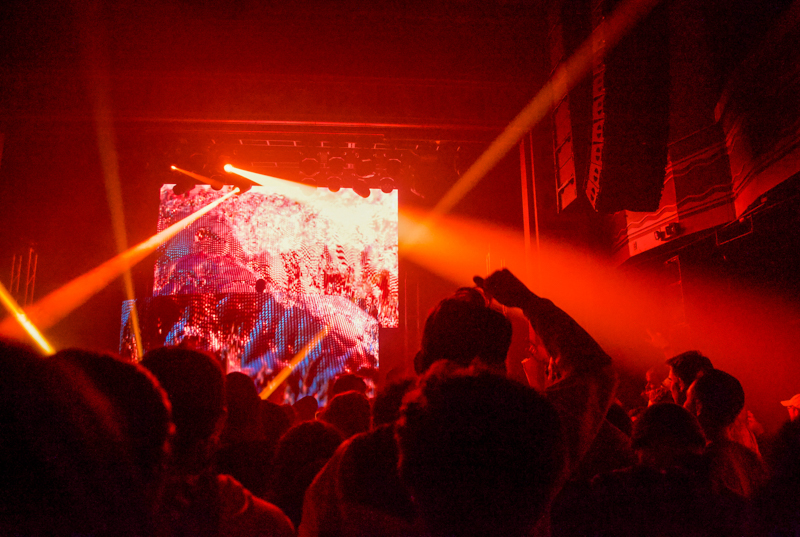 Grant Nelson, or Medasin, has been on the producing grind for over a decade, which may surprise many considering he is just 22. The bald-headed Dallas native started making beats at the tender age of 12, went through the throes of drug addiction before he could drive a car and a few years later, found himself with an official remix of DJ Khaled and Rihanna’s smash hit “Wild Thoughts.” Medasin’s streaming numbers have largely come from remixes like this one as well as his 2016 collaboration with Masego called The Pink Polo EP. However, his solo work has held its own on streaming services; his debut album Irene racked up over 10 million Spotify streams.

To promote his second album RIPPLS, which is slated for release January 2020, Medasin set up a two-show “beta test,” spending Friday night in New York’s Webster Hall and playing The Fonda in L.A. the next day. Prior to the performance, he shared an Instagram video containing a preview of the visuals to come. The video, which served as Friday’s introduction, features a spaceship taking off from the depths of a rippling body of water, the scarlet red fire exploding off of the bottom of the ship. The camera continued to pan out until the ship was just a tiny molecule streaking through a star-filled sky. It was, in a word, breathtaking.

Medasin gave the sizable Webster Hall crowd a brief greeting at the start but quickly took his place behind a big DJ booth, where he stood the entire night. From the vantage point of those in the first few rows, he was completely obstructed, and those in the back could only see a faint silhouette. Aside from a few shouts of  “how we feeling, New York?” Medasin kept the performer-audience interaction to a minimum.

What he lacked in this area though, he more than made up for with mesmerizing visuals. Stunning, celestial displays of vibrant color and trippy tessellations accompanied each song and arguably did just as much work as the music itself in bringing the show to life.

Medasin’s performance did not just preview RIPPLS, but also cued the audience in on his signature production style. In addition to playing tracks from RIPPLS, he played Irene instrumentals, songs from The Pink Polo EP and even threw his trademark electro-futuristic buzzy synth flavor onto hits like Post Malone’s “I Fall Apart,” Flume’s “You & Me” and Axel F’s “Crazy Frog.”

Two songs stood out as having the biggest effect on the crowd. 2016 club banger “The Zoo,” which he worked on with X&G and josh pan, turned Webster Hall into Electric Zoo for a few brief minutes. The audience also went crazy for his rendition of “Shooting Stars” by Bag Raiders.

Yet it was the tracks from Irene that did the most for me. Gorgeous ethereal instrumentals like “Ramen” and “Home” showcased the depths of his talent and creativity as a producer. The rumbling bass line coupled with Mario Kart-type synths of “Ramen” made it one of the hottest songs of the night, and the four-count delayed drop of “Home” hit the crowd like a tidal wave.

Medasin had a lot of name recognition among the overwhelmingly Gen-Z audience; one fan even held out a Caillou shirt on display with “medasin” replacing Caillou as a tribute to his shaved head. It was clear his performance had moved the audience, as he left the stage to chants of “One more song!” Following the show, Medasin wore his satisfaction with the Webster Hall crowd on his sleeve on Instagram, calling the performance “the most gratifying show [he’s] ever played.”

In summary, well-thought-out visuals with elements both tropical and astronomical, robust, colorful lighting design and beats equally bass-heavy and celestial combined for a solid performance from Medasin, one of the most intriguing voices in the electro-pop scene. Tracks from Irene may give off underwater smoke sesh vibes, but RIPPLS seems more honed in on traveling to infinity and beyond.