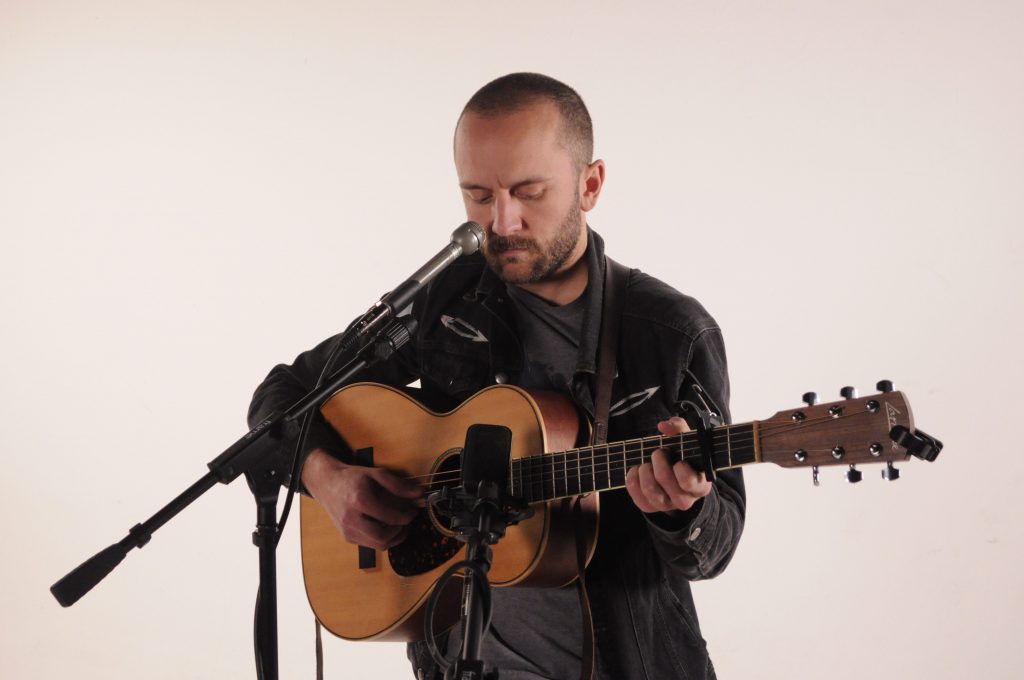 Ian Fisher was kind enough to stop by the Airplay studio this late October to play a few songs and chat before his first Chicago show in over five years. These songs, created somewhere in the space between his hometown of Ste. Genevieve, Missouri and current home in Vienna, are featured on his newest release Nero. Fisher provided us the perfect soundtrack to a midwestern Sunday afternoon, really the perfect soundtrack for any time.

WNUR: Having read about your story, the most immediately interesting thing to me is you are from Missouri but no longer live in the States, how long have you been living in Vienna?

In 2008 what prompted your initial move?

I studied there.  I studied politics in Vienna, and when I got there it was the first place I ever felt at home, well first city I ever felt at home and didn’t want to leave every day.  But before I moved there I actually thought about moving to Chicago.

So you moved to study politics, but has music always been something you were doing?

I started playing music when I was thirteen, I started playing concerts and writing songs then too, so I’ve been playing for more than half my life.   It was always a big part of my life, through my studies as well, but then I had to make a decisions because, well, I couldn’t do both.

Are you satisfied with your decision?

Yeah, for now.  I think that I’ll probably keep doing this for a while, but I’m still interested in history and things of that sort, especially history.   I was always interested in politics too, but it just got me so depressed.  Especially in the United States, especially when George Bush was president when I left, that was one of the main things that prompted me to get out of here.  Not much has changed, I like Obama much more, but It’s pretty much just a different figurehead for the same monster.

Well he is from Chicago.

Talking about your newest record Nero: you’ve released about ten albums, but this one as you mentioned earlier was a long time time coming.

Yeah.  I started writing some of those songs like seven years ago or more.  So some of them are really old and some are much newer of course, but there are a few on there that I’ve been carrying around for hundreds and hundreds of concerts.  I had started probably four-hundred concerts with the song “Nero” before I put it on this record.  It’s just one of those songs that’s been brewing forever; I was never satisfied with the recordings we did and finally I went into the studio with my friend Fabian Kalka and a few others in Berlin in early 2014 and that’s when we started recording the album.  So it’s been almost two years since the beginning of the recording process.

And then you’ve been touring in Europe off and on for the past five years, how has the reception been over there?

Despite being in Europe and playing for a European crowd most of the time, do you feel like the music you make takes root in your home in Missouri?

Yeah, I mean the main reason I would say, that I turned back to country music, looking back on my personal musical history, is that it started out with country music.  Well, technically it started with Michael Jackson, but soon after that it moved to country music in the early 90s.  Then once I became a teenager, I turned my back on that because it represented some part of the culture in the midwest, more specifically in Missouri, that I really didn’t like.  Pop country at that time also took a turn for the worst, it basically became some strange hybrid of pop music and southern rock with extremely materialistic, superficial lyrics and a silly southern accent coming from people without a southern accent.  And that was what country music was for me for a large portion of my life.  When I moved to Austria in 2008 I really started getting into what country really is, which is really beautiful, soulful music and I kind of discovered that through Gillian Welch mostly and then through Willie Nelson and Hank Williams, the honesty that comes through their music.  And I kind of used it as a form of a security blanket really, to reconnect with someone I used to be, and also to pick and choose elements of American identity that I was actually proud of because there was so much, and there still is alot, that I’m not proud of.  I think that pretty much 99% of the people reading this will probably be able to relate to the exact same thing they are not proud of when it comes to the United States, and I’m not saying Germany or Austria is any better.  But one of the things I am really proud of is the music history here and country music was kind of my way of finding some patchwork identity for myself while being an immigrant.

Do you think that was something only being away could have allowed you to do?

Yeah, I don’t think I would have been able to find that here.  Being so far away, you get a distance, you’re able to kind of view where you’re from and the society you’re from in a little petri dish.  I’m not saying that I’m superior in any way to do that, but it just seems to be the truth, whether you come from the U.S. or from Germany or Mexico or Japan or any country.  When you get out of it you become more aware of what elements of your own personality and your own thoughts are truly your own or  part of your conditioning through the society.  And being away helped me realize that somewhere deep inside of me was a real country fan and musician.

Very well said, so how has it been touring this album so far in the U.S.?

Well it just started, but it’s been good.  The show in St. Louis was alright, but the show last night in my hometown of Ste. Genevieve was really really special.  Probably one of the best concerts I’ve ever played, because so many of these songs are about where I’m from.

And was it a family affair?

My dad built the venue [laughs].

So a wonderful homecoming.

Yeah, there were many family members and friends and these songs would exist without those people, and without that place that we played.  We did it on my farm, it was beautiful.  So I don’t think anything half a special is going to happen on the rest of the tour, but you never know.

Well we wish you the best for the rest of your tour, thank you so much for doing this.
Yeah man, thanks for having us.