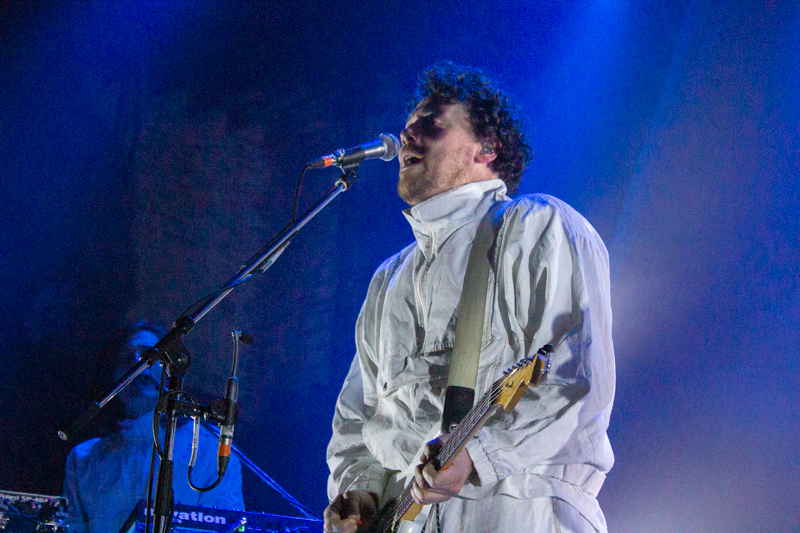 Dressed in all white from their socks to their guitar straps, Metronomy surged straight into the first song of the night and the intro to their latest album, “Wedding.” Complimented by ethereal lighting, swirling graphics, and a cult crowd, the electro-indie band didn’t ever say hello to Thalia Hall. It was clear from the start of the set that the 20-year-old UK group didn’t just come to play a set; they came to put on a show you’d remember.

Metronomy has been melding rock, pop, and electronic sounds since multi-instrumentalist and producer Joseph Mount started mixing music on his home computer as a teen back in 1999. Twenty years later, Metronomy closed out summer 2019 with the release of their sixth studio album, Metronomy Forever back in September. Touring in support of this release, the group played with a clear purpose; lead-man Mount didn’t speak to the crowd until the middle of the show, and he only did so briefly.

“This is already feeling like the best night of the U.S. tour so far!” said Mount. “I remember the first time we came here and it was the most exciting night of my life. That is before tonight, obviously.”

I hope you don’t tell that to all your other cities too, Mount. Normally, I would be a bit unhappy with the lack of crowd interaction, but it felt like a clear choice. Although I couldn’t get a feeling of the band’s personality, in doing so, it gave a sense of continuity that benefitted the experience in a different way than I’m used to.

Metronomy previously said that their latest album, full of a variety of styles, came in part from a desire to replicate the feeling of listening to the radio. Most importantly, Mount has mentioned that he was thinking of how the radio never, ever stops. The idea of a constant musical stream and Mount’s newfound freedom beyond the idea of a perfectly structured 10-track record explain the length (there’s 17 tracks!). I think that the group was trying to create a live experience version of what they were going for with their last album — a show without time to stop — and I loved every second of it.

The dedicated audience was an eclectic assortment of ages and tastes. From where I was, a young couple in front of me was head-banging together while two middle-aged women to the right of me danced; it didn’t matter who you were, everyone was moving in their own way. I’m not one to bust down at a concert, but I still couldn’t help jumping and dancing around full-force song after electrifying song.

They played a number of songs off their debut 2011 album The English Riviera and their 2014 album Love Letters in addition to their newest releases, pleasing both the older and younger crowd. The floors of Thalia Hall shook when Metronomy belted out their most popular song ever, “The Look,” with over 100 million streams on Spotify. As they sped up the tempo and upped the pitch, the crowd absolutely lost it.

In a more intimate moment, all of the band members left the stage except the two pianists for the charged electronic instrumental “Lying Low.” The two slowly pushed their pianos toward one another, with one saying “Oh?” and the other replying “Yeah!” until they met in the center of the stage staring eye to eye, feeling so lovingly funny as the beat ascended to a laughing audience.

Easily shifting between genres and sound song by song, their synth melodies and dreamy surf rock guitars made for a beautifully contained chaos all night.

Nearing the end of the set, Mount waved goodbye, “We can’t wait to come back and play for you again! Look after yourselves.” The crowd refused, and after what felt like a few minutes of constant cheering, they played two more songs for the encore. They ended the night on an odd note with one of their oldest and most dizzying songs of the night, “Radio Ladio,” before leaving without another word.

A guided trip of decisive ups and downs, it was truly the set that kept on giving. Before coming to the show, I was genuinely wondering what songs they would choose to play considering how many they have to choose from. I was afraid that I wouldn’t have heard everything I wanted to, but I walked away feeling like I couldn’t have asked for more. The seasoned band put on an unforgettable concert that left me feeling somehow simultaneously pumped and plainly content (for honestly a few days).

I know I’ll definitely be seeing them again if I have the chance. Stream Metronomy Forever and catch them as they head into the second half of their six-month-long tour!

Picks off Metronomy Forever for: