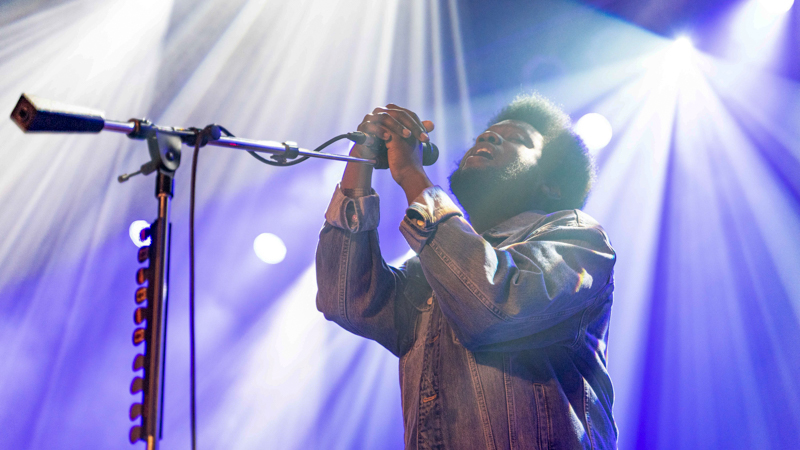 Michael Kiwanuka walked on stage to a dazy soundscape filled with fluttering synths and disorienting guitar licks. Stepping up to the microphone, he slid into “Piano Joint (This Kind Of Love),” a stripped down ballad that eventually opens up into a grander string orchestration. The second he opened his mouth, the crowd broke into applause. One lady screamed from the back enthusiastically, “I love you, Michael!”

Thanking the audience at the House of Blues on Tuesday, Feb. 4, Kiwanuka then strapped on a red electric guitar for the uptempo “One More Night” and vibrant “You Ain’t The Problem,” which opens his new record Kiwanuka. The song is driven by a bongo groove and shaker, its piercing guitar shrieking over a haunting vocal melody. Kiwanuka’s choice to start singing on an off-beat adds to the disarraying surrealness of the song.

There’s a certain warmth in Kiwanuka’s voice found in old soul records. But it also carries the swagger of ‘70s funk and the unmistakable yearning of ‘60s blues. His deep, lower range was complemented by vocalists Emily Holligan and Simone Daley Richards.

After performing the bouncy “Rolling,” Kiwanuka led the audience in clapping over his a capella intro to “Black Man In A White World,” which fuses funk, jazz, blues and afrobeat. Slowly, the bass crept in and the kick drum filled out the tune. Among other songs, “Black Man In A White World” showcases how Kiwanuka, whose parents are from Uganda, implements African rhythmic styles into his contemporary blend of genres. One of his most socially conscious works to date, the song’s verse features a crooning, “And I’ve lost everything I had/And I’m not angry and I’m not mad.” The song, however, is both a tale of struggle and empowerment, as Kiwanuka sings at the end, “I don’t mind who I am… I’m not wrong, I’m not wrong.”

Several moments throughout the night were reminiscent of a Pink Floyd show, from the psychedelic-inspired “Rule The World” in which Holligan unleashed a fiery vocal solo in the style of “The Great Gig in the Sky,” to the hazy transition from “Final Days” to “Solid Ground,” which filled the venue with dreamlike synthesizers and voices.

“Hero,” coupled with its somber, acoustic intro, stood out as a highlight of the show. The song’s punchy guitar riff and catchy chorus disguise its dark lyrics: “It’s on the news again/I guess they killed another.” Between a crunchy guitar solo and a snare-heavy drumbeat, Kiwanuka sings mournfully, “To die a hero/Is all that we know now.” Kiwanuka told the BBC that “Hero” was inspired by the Civil Rights Movement and the despairing sacrifice of martyrdom.

Toward the end of the set, Kiwanuka dusted off the wistfully jazzy “Tell Me A Tale” and then spoke a bit about his experience in the music industry before performing the recently released “Light,” a song that he said reminded him of playing acoustic guitar in his London bedroom.

“If you’re lucky, you get to be in the music industry and do cool things like play the House of Blues in Chicago,” Kiwanuka told the audience with charming humility.

After a little over an hour, Kiwanuka and his band exited the stage, leaving off of the set some of his most beloved songs. After roaring requests for an encore, the crew reappeared and delivered four more.

Kiwanuka performed the trippy “Hard To Say Goodbye” from the new record and the melancholy “Home Again” from his first album. Then dozens of cell phones shot up in response to Holligan and Richards singing the first “ooh”s of “Cold Little Heart,” the song famously known for being the theme of HBO’s Big Little Lies and propelling Kiwanuka to new heights.

The band ended with “Love & Hate,” a moody folk tune tinged with R&B and carried by a soaring string orchestration. Lead guitarist Michael Jablonka shredded a shrieking, unhinged solo before Kiwanuka closed the song out alone with an acoustic guitar, singing the intro melody.

Catch Kiwanuka on tour in the United States before he heads home to the United Kingdom and hits other parts of Europe.