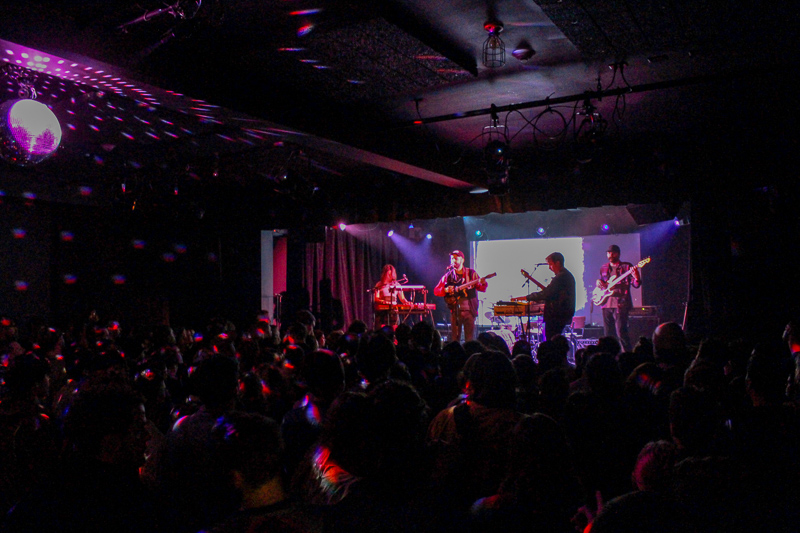 Illuminated by the brilliant light of an overhanging disco ball, Sleeping Village’s concert space was packed to the walls with a buzzing, bustling crowd. Everyone was there to see psychedelic outfit Mild High Club, a group who has been making waves across the alternative/indie sonisphere with their unique blend of funk and dreamy pop. As the members began to file out onto the humble stage already set up with keyboards, guitars and a drum set, the fans started cheering and whistling, their excitement palpable. But when singer and founder Alexander Brettin emerged, the crowd erupted into applause. Brettin hails from Chicago and was donning a Bulls jacket; tonight it was clear that Sleeping Village was welcoming a hometown hero.

With a small smile and a simple wave, Brettin acknowledged the eager fans before he and his club wasted no time in starting the show. Mild High Club’s set was a dreamlike escape from reality — whether it was stress from work, school, personal life or the worsening weather just outside, I could see it all melt away from the crowd around me. The third song the band played was “Skiptracing,” a mellow track punctuated by bright guitar chords, a groovy bassline and even cowbell. During this song, the whole room seemed to be swaying together. Moments later, the descending synth sequences of “Homage” filled the space and we were all once again whisked away onto another cloud.

One thing that deeply impressed me about Mild High Club’s show was Brettin’s voice. His vocals soared through the air, but not in the same way as, say, those of a soul singer or opera singer dominate every crack and crevice in the room. His vocals were like a thin cloud of vapor washing over you; they were calm, soothing and inviting, but present and sincere. He didn’t have to stand there and burst a vein trying to belt out high notes in order to have a commanding presence. The music’s beautiful dissonances, chromatic intervals and frequent transposing from major to minor definitely helped to bring out the stunning quality of Brettin’s vocals that almost makes it sound like he’s the voice in the back of your head.

While the band delighted the crowd with fan favorites such as “Kokopelli” and “Chapel Perilous,” they also treated Sleeping Village to two new songs. The first one was surprisingly upbeat and dancy, and the second — also the final song — was jazzy, groovy and properly showcased the stellar musicianship of the Club members.

Mild High Club fully captivated and dazzled everyone in that room, whether they were longtime fans or there just to do something different on a Wednesday night. The music was a fantastical getaway through the Club’s catalogue of soothing, dreamy, funky psychedelia, and the new songs definitely made me stoked for what they have in store in the near future.