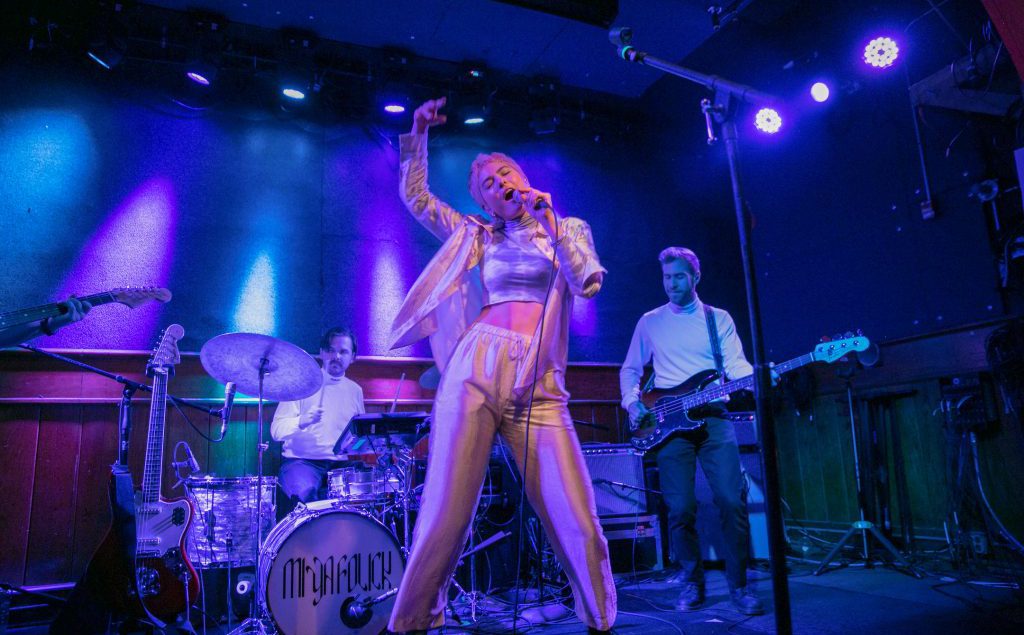 My ears were still ringing with Miya Folick’s poignant voice as I walked away from Schubas Tavern Saturday night. Her notes pierced the foggy forty-degree night she performed on. It might’ve been her first headlining tour in Chicago, but it definitely wouldn’t be her last.

When I got to Schubas fifteen minutes before the opener started, a crowd had already gathered. Barrie, a dream pop band from Brooklyn, took the stage quietly and with a mutual head nod, they started playing. The band had a relaxed look, with a member rocking a rolled beanie hat, one in a velvet shirt, and the lead singer wearing pants that looked like sweats. 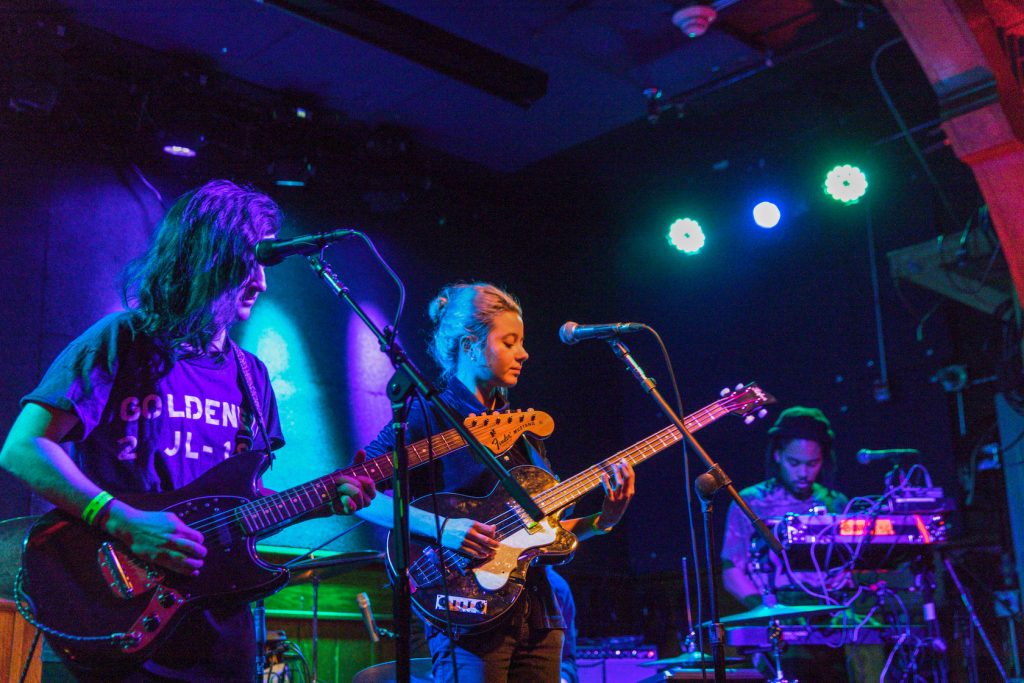 They caught the crowd’s attention once they reached their fourth song of the night, “Clover,” a new track on their upcoming first full-length album. Their synth-heavy sound and lulling voices made for, what I described in my notes as, “indie elevator music.” The group gave off an all-around “chill” vibe which was only emphasized when the lead singer, Barrie herself, pulled her hair back while she was playing guitar. After their drummer decided to take off his shoes and socks, and Barrie took a drink of what she said was water out of a Le Croix can, the band played a song from their first E.P “Singles” called “Tal Uno,” which had a very 80s feel to it. When their set was over the sheepishly thanked the crowd, but no one seemed to notice. Overall, Barrie’s soft opening performance didn’t seem to excite anyone in the crowd.

Contrastingly, when Miya Folick ran through Schubas side door and onto the stage the crowd gasped collectively. She was wearing a white satin shirt that had a western feel to it with fringes on the chest and down the arms, paired with matching white satin pants. Her outfit was fitting for her performance—something she could do but if anyone else tried they wouldn’t be able to pull it off. Folick didn’t grin when she walked on stage; instead, she gazed out into the room with a haunting expression and began to snap. The crowd, entranced, was silent waiting in anticipation. The first few lines she sang were from a short unreleased song titled “I’m Hard.” The synth built behind her until the room shook, then suddenly the beat shifted and she began to moan the first few lines to “Premonitions,” the namesake of her first full-length album that came out this past October. 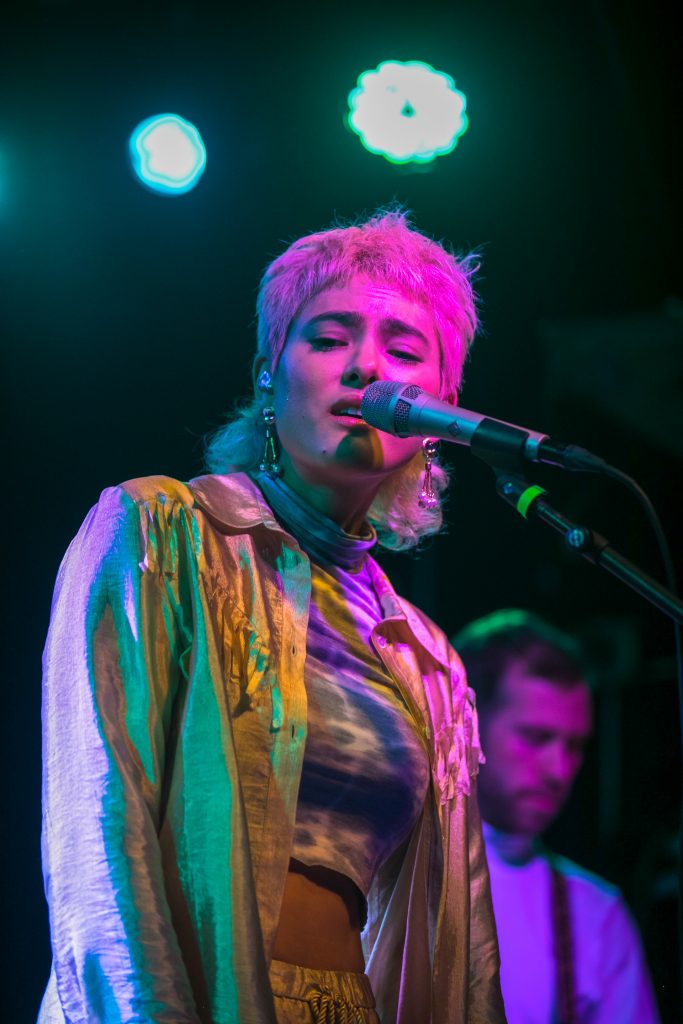 Premonitions is an album that explores the contrasting nature of everyday life, how we’re empowered and powerless all at once. This contrast came through in Folick’s performance Saturday night when she followed her ballad-esque songs with her upbeat, syncopated bassline tunes. Like when she sang “Stock Image,” the crowd screamed as she slowly crawled across the front of the stage, making serious eye contact with everyone in the first row. Then she immediately followed that intensity with the lighthearted, “Leave the Party,” a song that warranted singing along and pony-stepping from everyone listening. 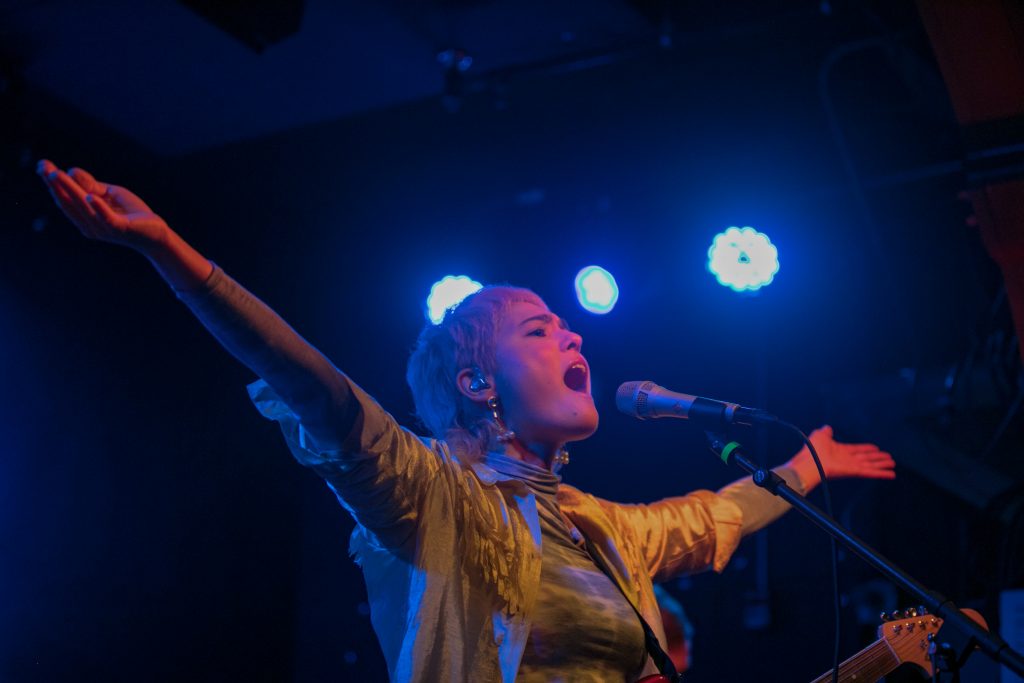 Folick’s lyrics are a sign of the times with lines like, “Read Wikipedia til my eyelids fall down,” or “‘Cause I scroll and don’t see new anything,” and during her performance she took time to talk about issues of the time we’re living in right now. She encouraged our generation to focus on effective communication, after singing “Stop Talking,” a song about someone obsessively talking about a person they’re interested in. She gave a speech about feeling unworthy and how the negative perception people have of themselves needs to be changed before singing “Thingamajig.” Although these messages are important and uplifting, I felt like she delivered them in a rehearsed and cliché way which didn’t add to my overall experience. It was Folick’s powerhouse voice, the tears in her eyes, and her body language that I felt evoked these messages more effectively than her saying it outright. 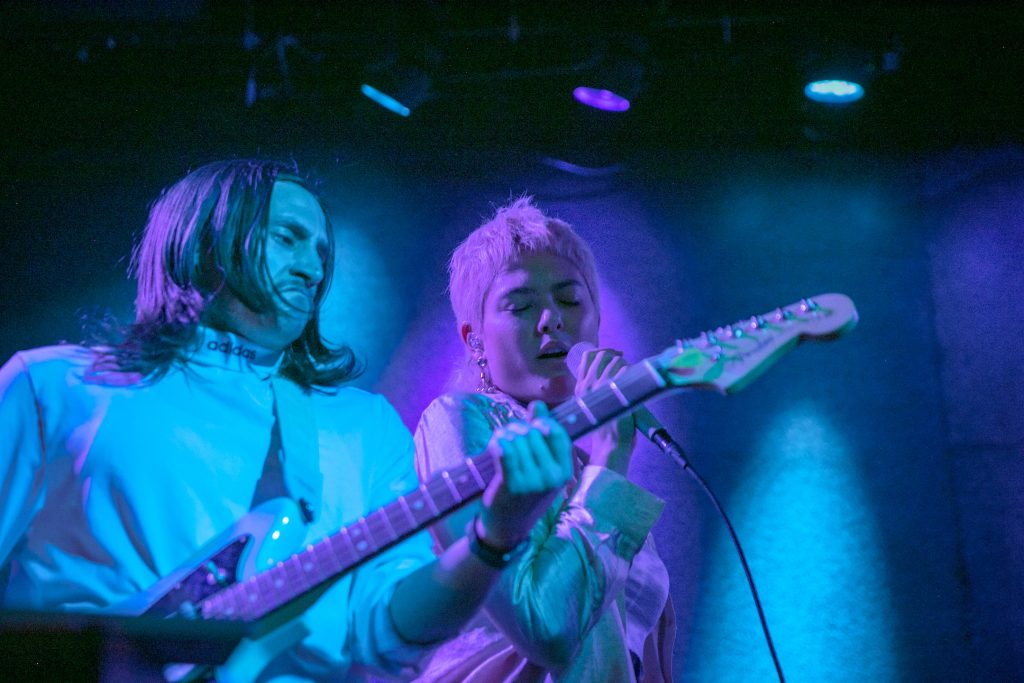 Over the course of the night her dancing got wilder, her singing got stronger, and her entire performance became more captivating. She ended her set with a cover of Joni Mitchell’s “Woodstock,” and it was easy to see why she chose to close with that. With every note, her raw vocal talent haunted the room. When the song ended, the crowd stood there dumbfounded—what had we all just witnessed? All I walked away knowing was that the next time Miya Folick is in town, I’ll be seeing her again.

→ Stop Talking About That Boy