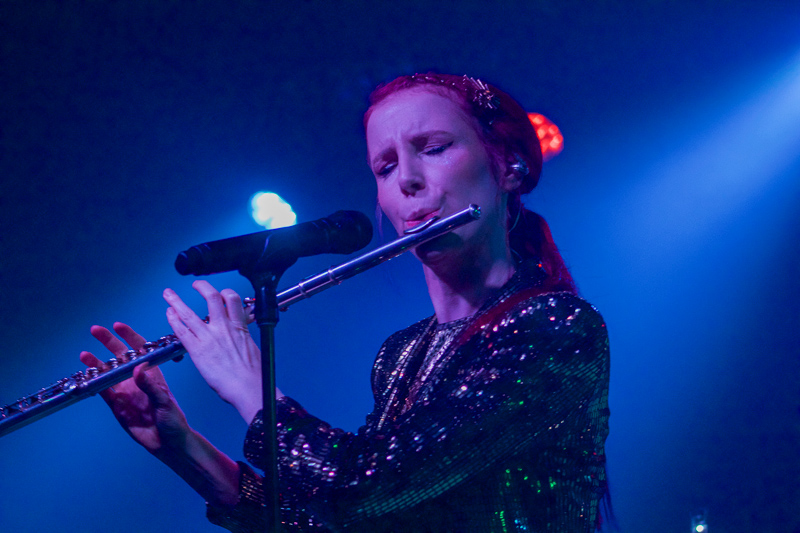 The “vibe” has quickly become the most important intangible of a live show. It refers to the feeling that a group’s music and the surrounding context elicits in its audience. The general ambiance that the band creates — which can manifest itself through sets — lighting choices, and interaction with the crowd can often play just as large of a role in how the crowd receives a show as the music itself. The quest for good vibes unites us all; every concertgoer hopes to feel a deeper connection to the artist after leaving one of their shows.

Since their first full-length album in 2012, LA-based neo-soul group Moonchild has carefully cultivated their personal vibe. Lead singer Amber Navran’s breathy vocals soothe the mind like a temple massage. The production creatively mixes electronic elements with instrumentation. Navran, Max Bryk and Andris Mattson all have a hand in the mixing and mastering, and also play a variety of instruments, from the flute to the flugelhorn. Even the album covers of their first four projects convey an ethereal feeling, one of connection to nature and spirituality. The cover of their latest project, 2019’s Little Ghost, features strips of bright color emanating from a snow-covered gray mountain with burnt-orange sand and teal water at its base. Much like the backing tracks for each Moonchild song, the cover fuses the natural and the fantastical to make something beautiful.

Well before Moonchild took the stage, the sold-out Bottom Lounge was packed to the brim. Virginia’s five-piece funk outfit Butcher Brown started off the evening by crushing some jazzy instrumentals. After watching Butcher Brown do their thing, it became clear that the group bubbles with talent. Marcus Tenney, the de facto group leader, served as a hype-man for the act to follow, repeatedly calling out: “Who’s ready to see Moonchild?” By the time they left the stage, they had torn through plenty of solos and won some Chicago hearts in the process.

When Moonchild took the stage, Navran emerged in a striking silver glittery jumpsuit, adding even more pop to her bright red hair. Bryk and Mattson also caught eyes, with Bryk in an electric blue blazer and Mattson sporting a light red button down. The band was playing to a loyal crowd at the Bottom Lounge, as fans sang along to the first two tracks of the night, “Wise Women” and “Too Much to Ask.” At least a few singers are present in Moonchild’s Chicago fanbase, and these fans did not hold back with their “backup” vocals. People added their own riffs to songs throughout the evening and I found myself in awe instead of annoyed by their contributions.

The well-cultivated vibe helped turn the evening into a triumph for Moonchild. Celestial visuals played on the back screen and lights of every color imaginable cast breathtaking shadows on the band. The background elements, combined with dazzling solos from each band member on too many instruments to count, transported the audience to this dreamlike place up in the cosmos.

While Navran’s voice is beautiful, the next step for her is to work on projection, a common Achilles’ heel for vocalists who operate primarily in head voice. For fans toward the back of the crowd, it was likely difficult to hear her over the live instruments. Ordinarily, this would serve as a major obstacle to a performance. Yet it came across that the crowd’s respect for her in-studio voice outweighed anything she could have possibly done live. Shouts of “yes, queen!” and “you better!” permeated the Bottom Lounge all evening.

Navran took a brief break in between the set to encourage donations to the All-Stars Project, a Chicago charity dedicated to improving the lives of people of color. This was met with tremendous applause and visibly hit home with a majority POC audience. More broadly, the band’s commitment to putting their white privilege to good use in propping up organizations like this in each city they tour speaks volumes about the content of their character.

After “The List,” the band exited, but made a quick return for a one-song encore. As the watery drum programming came in for “The Truth,” the hype level of the crowd reached its peak. All through the audience, hands were in the air and bodies bopped side to side.

Moonchild embarked on a spiritual journey Friday night and the Bottom Lounge audience held on for the ride. I came away from this performance with a profound respect for the band, not only for their talent but for the way they choose to use their platform as touring musicians.

Moonchild – Be Free, The Truth, Too Much to Ask