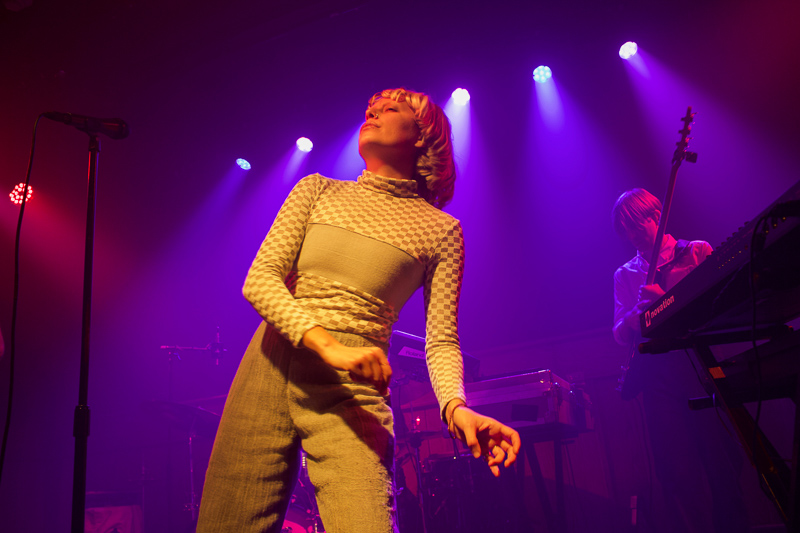 Andrea Estella emerged for Mr Twin Sister’s show at Schubas looking doll-like, with matching gray linen pants and a checkered turtleneck, and a blonde wig — a long bowl cut curled in at the bottom edges. But before Mr Twin Sister took the stage, Moon King’s Daniel Woodhead began opened with songs just from his most recent two albums, which veer away from his earlier lo-fi indie rock into disco reminiscent of the 1980s. My favorite song was “Apartment Fire,” a piece about a nighttime fire, with reverberating bell-like synths.

During its show, Mr Twin Sister drifted away from the dream pop of its recordings into house music. The band played an upbeat, rhythmic version of “I Want a House,” which is stripped down and quiet on the band’s self-titled album. Estella sings only, which gave her a lot of power during the show. She danced slowly, moving her hips and whooshing her arms back and forth as if she were painting on an invisible canvas. On “Keep on Mixing,” she made a gagging motion while singing the line “history loves to repeat,” as if she were going to throw up history, letting time repeat itself.

When the man next to me said that last time he saw Mr Twin Sister in Chicago, Estella was dressed as a winged angel (the band’s first album is titled “In Heaven,” after all), I wasn’t surprised. She often sings in a whisper, and a spiritual air hung around her throughout the performance, even after she asked for permission from the crowd to take off her white, heeled boots, revealing cartoon fish socks.

Mr Twin Sister’s Eric Cardona complemented Estella perfectly. His voice is high but matches Estella’s in tone, and their voices meshed so well when they sang together that the two often sounded like one enriched voice. Cardona’s main instrument is guitar, but he plays saxophone too, and many of the songs featured his smooth sax solos. The audience was increasingly excitable over the course of the show, often clapping for so long after songs that Estella would just launch into the next one. “You’re fun,” Estella told the crowd towards the end of the show, before revising her statement: “You’re more than fun. You’re powerful.” The crowd did not seem powerful alone though, so much as Mr Twin Sister had injected a pulsing energy into it that was nearly impossible not to dance to.