“I’m Nick Murphy, or at least that’s what my mother named me.”

Murphy, a rebranding of his former persona Chet Faker, graced the stage of Chicago’s Metro on May 29.

His set included cuts from his moody 2014 LP Built On Glass, his collaboration project with British producer Marcus Marr titled Work and his ambitious 2019 release Run Fast Sleep Naked. The multi-instrumentalist bounced around the stage, alternating between piano, guitar and a variety of synths, all while carrying around a string of bells that bridged the songs together.

Murphy opened with the poppy “Hear It Now,” a song better executed live. The audience released their anticipation at the anthemic chorus: “I can hear it now!” He then slid into “Yeah I Care,” a track juxtaposed with sweeping soundscapes and spasmodic glitch guitar. It’s a vague song that evokes imagery of a man escaping something. Murphy sings, “I think I’m running, I don’t wanna leave with nothing” over a thumping bassline. The layering of scattered synth and a relentless rhythm section toward the end of the song creates a combination that strangely works, despite its potential for being one big headache machine.

The crowd sang along to the insanely catchy “Gold,” providing a pulse to the song with steady clapping. Murphy improvised on the piano before building up to “Talk Is Cheap,” the smooth, saxophone-driven hit from Built On Glass.

The peak of the show was undoubtedly the two songs he performed from Work. “The Trouble With Us,” a plunky dance bop, was made complete by Murphy’s dad-esque footwork. The song mixes Ed Sheeran-like verses with an undeniably groovy chorus.

Murphy and the band dragged out the much less accessible “Birthday Card” for at least 10 minutes, but that still felt too short. The song—a sexy, house-influenced club banger—is unlike anything else in Murphy’s repertoire. It’s repetitive and lyrically-simple, constantly pushed forward by a throbbing, strutting bassline. Murphy’s laid-back vocal style underlays popping synth, screeching guitars and tastefully sparse bongos. Throughout the endless disco jam, Murphy crawled on the stage, laying on his stomach and singing into a grounded microphone.

Despite the originality evident in much of Murphy’s music, some of his songs falter due to imitation. “Some People” could be a b-side on Radiohead’s A Moon Shaped Pool, and “Believe (Me)” sounds like if Bon Iver covered Kanye West’s “Runaway” (but it’s not nearly that interesting). While both songs are nonetheless enjoyable, it’s hard to listen to them without forming obvious associations.

While some of the mellower songs on the album, like “Harry Takes Drugs On The Weekend” and “Novacaine and Coca Cola,” don’t translate as well live, others, like “Dangerous” and “Sanity,” are made for the stage.

Because of the new sound that comes with his new stage name, Murphy is at the point in his career where his crowds consist of some people who come only for their old favorites—fans of Chet Faker, but not necessarily Nick Murphy. This became evident when midway through the show—when some fans got eager to hear the hits and called out requests—Murphy said, “If I played all the songs you want to hear upfront, you won’t stay until the end of the show.” Despite the comment being in jest, a woman responded, “But that’s why we give you our money!”

This barrier—performing for fans that refuse to evolve with the artist—is something Murphy will have to continually overcome throughout his creative development. He may lose a chunk of his audience along the way, but that’s a common cost of artistic growth. Murphy’s musical range, his intertwinement of older R&B piano ballads with newer funky electro-pop cuts, is ultimately what makes his show interesting and worth seeing. 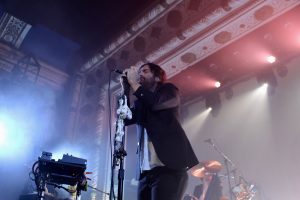