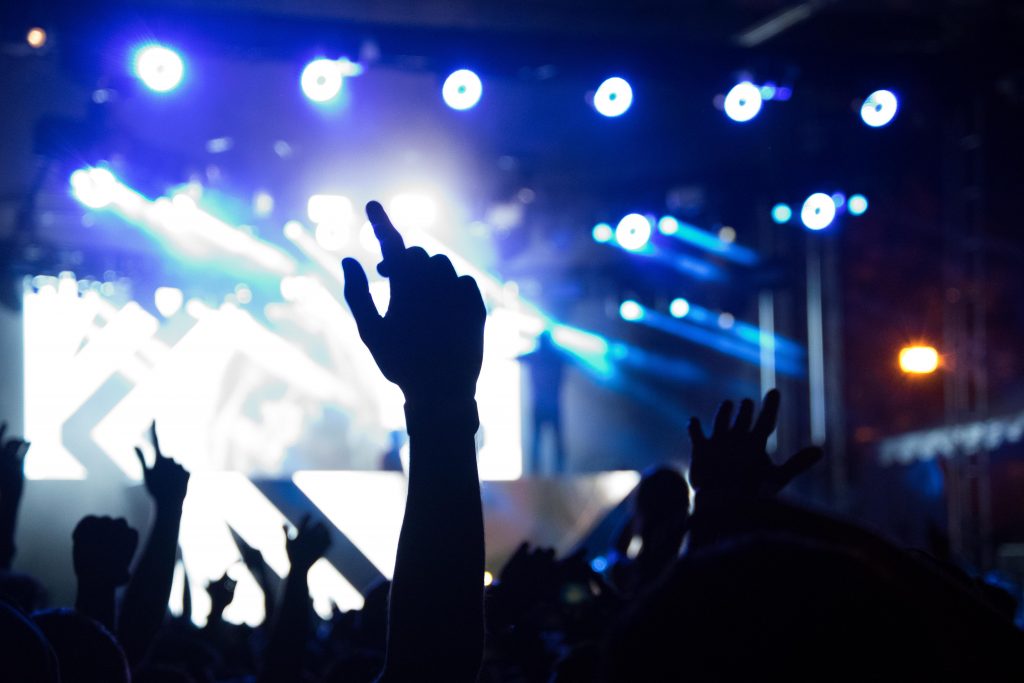 Writeup and Photos by Rachel Kupfer

Marketed as “summer’s last stand,” North Coast Music Festival was not only a celebration of the last rays of summer sun, but also of urban, tourist-free Chicago. From August 31 through September 2, Union Park was transformed into a lively stomping ground for downtown’s resident creatives and music lovers. Stages were filled with a good amount of local musicians, drawing crowds full of passionate listeners. Meanwhile, a curated lineup of artists created colorful installations with hip hop and street art themes.

But let’s not forget that nighttime performances were literal last stands against a never-ending mass of thunderclouds and pouring rain. Attendees missed out on two nights’ worth of heavy-hitting headlining acts. Despite an outstanding showing from those who did perform, the weekend’s exuberance took a heavy hit. However, a miraculous final day full of music brought both heat and proof of the city’s dedication to beating negativity with a good time.

Keep reading for my short notes on the sets I hung out at, and stay tuned for artist interview podcasts from Sonic Sanctuary’s Brennan White.

Bryce Vine: I’ve been listening to the hip hop artist since high school, and was glad to find he sounds the same in person as through my speakers at home. 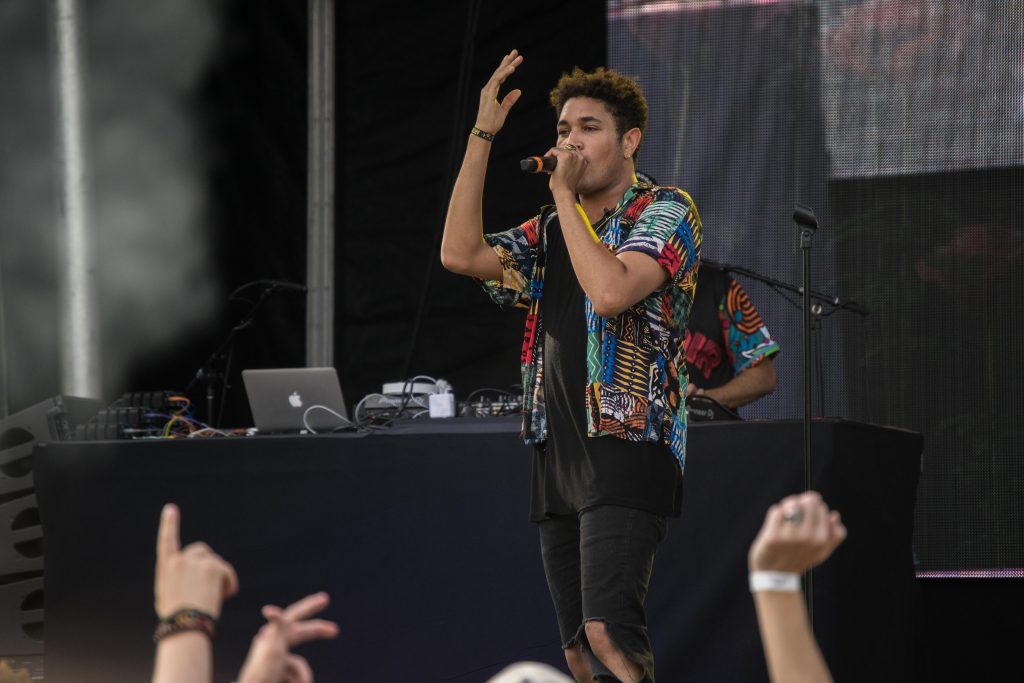 Two Friends: Bouncy, bright beats. The duo’s second half was more a playlist of their original tracks than a curated arrangement, but was fitting and fun for a crowd of dedicated fans. 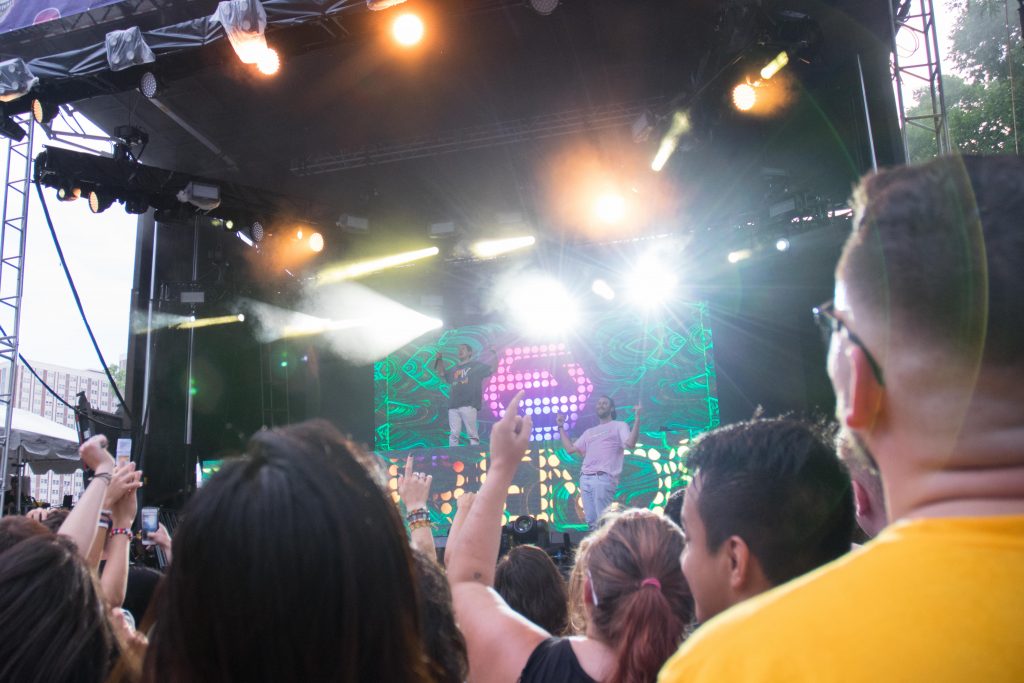 Iris Temple: My favorite of the day! The Chicago-based duo gave a gorgeous sunset performance, even though it was only seen by two rows of people. A romantic change of pace from the edgier acts. Picture perfect lighting on a small stage, and vibier synths and vocals. 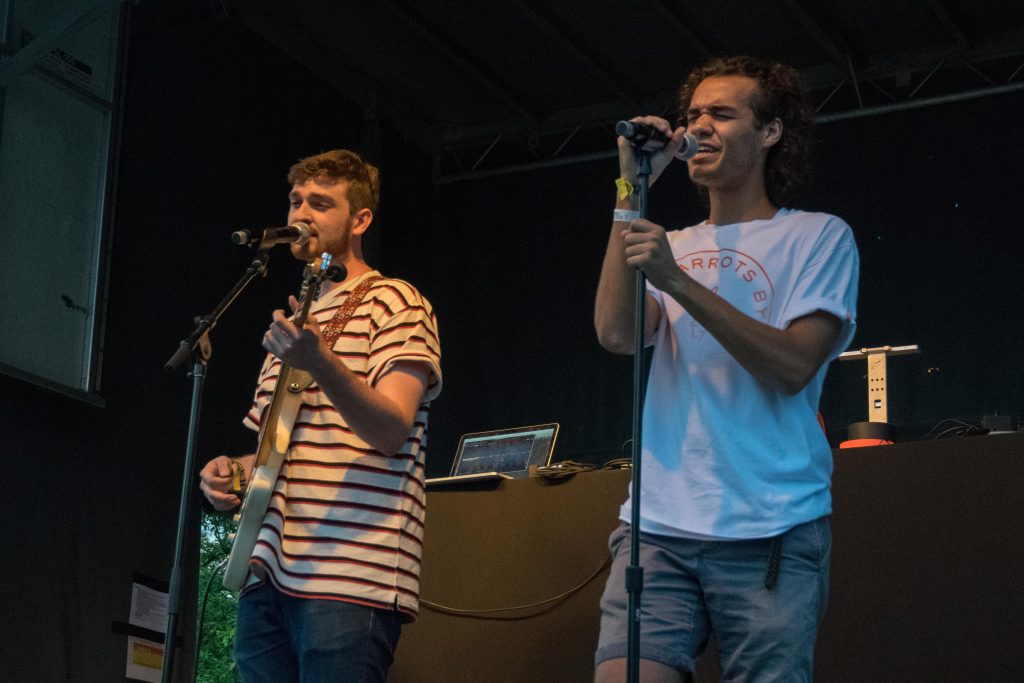 Snails: The complete opposite of Iris Temple, which allowed me to get my trap fix for the weekend. Killer first half, but cut short by the storm. Lots of spirited steppers and aggressive head-bangers, which was to be expected.

Robert DeLong: A crazy person, in the absolute best way. He ran around onstage with a Wii remote, used to control three different electronic setups, followed by a bouncing head of platinum hair.

The Strumbellas: Played to a crowd of longtime fans. Happy and joyful music, creating a sense of community. 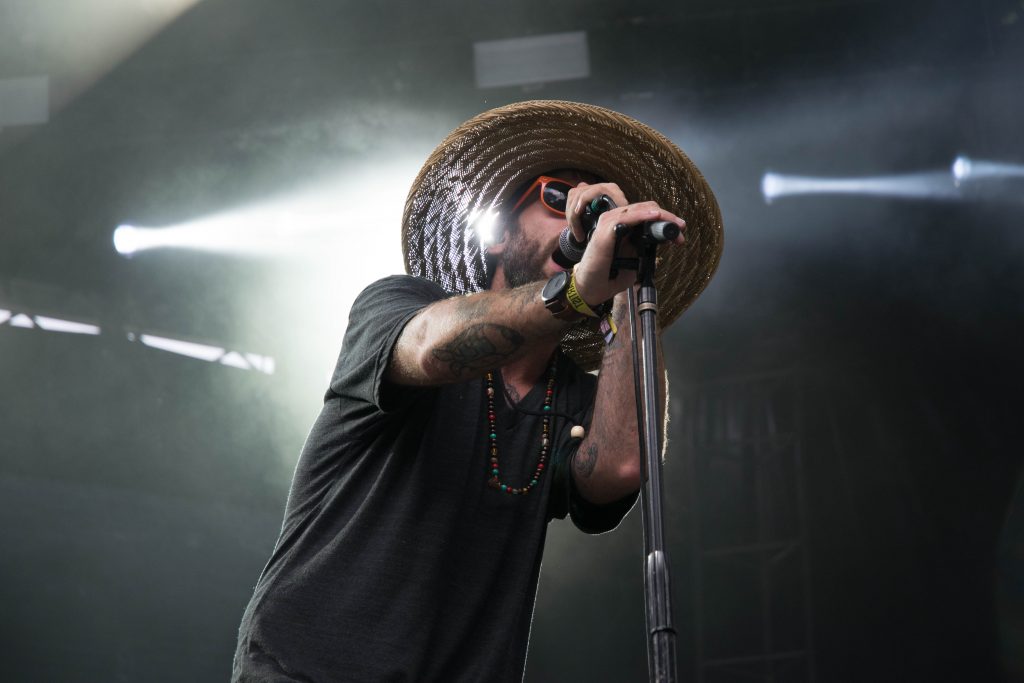 The Polish Ambassador and Diplomatic Scandal: A huge surprise! Animated musicians and funk with an eastern European twist made a unique combination that I would have listened to for hours. 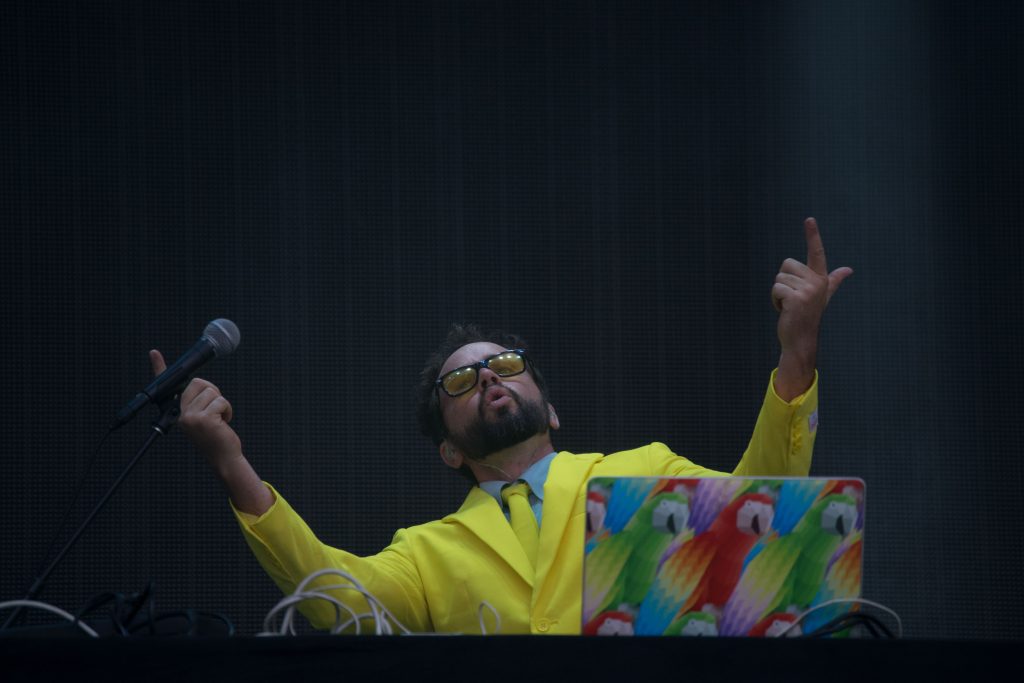 RL Grime: I saw him in May, before the release of his third album, NOVA, and was thrilled to hear the new set. It went above and beyond my expectations. Some drops fell a bit flat, but hearing the album live with an entire sea of people made up lost ground–and then some. 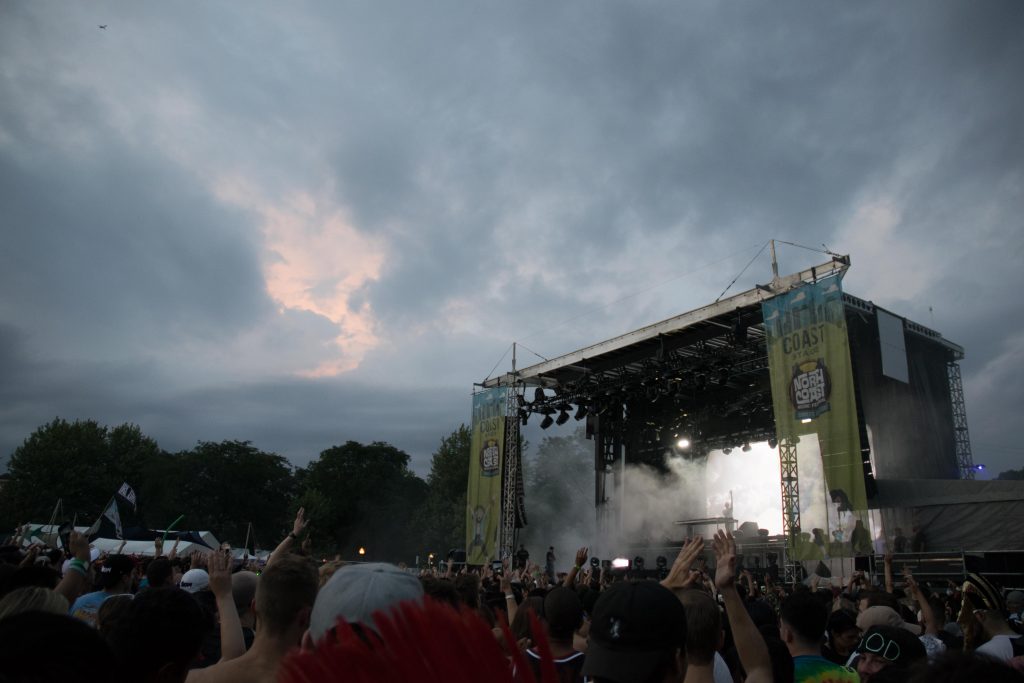 Cashmere Cat: Unconventional drops, glistening pops and quirky arrangements. A nice change of pace. He opted out of using visuals, adding emphasis on the music, and ended up being an impromptu headliner when gates once again closed early due to storms. 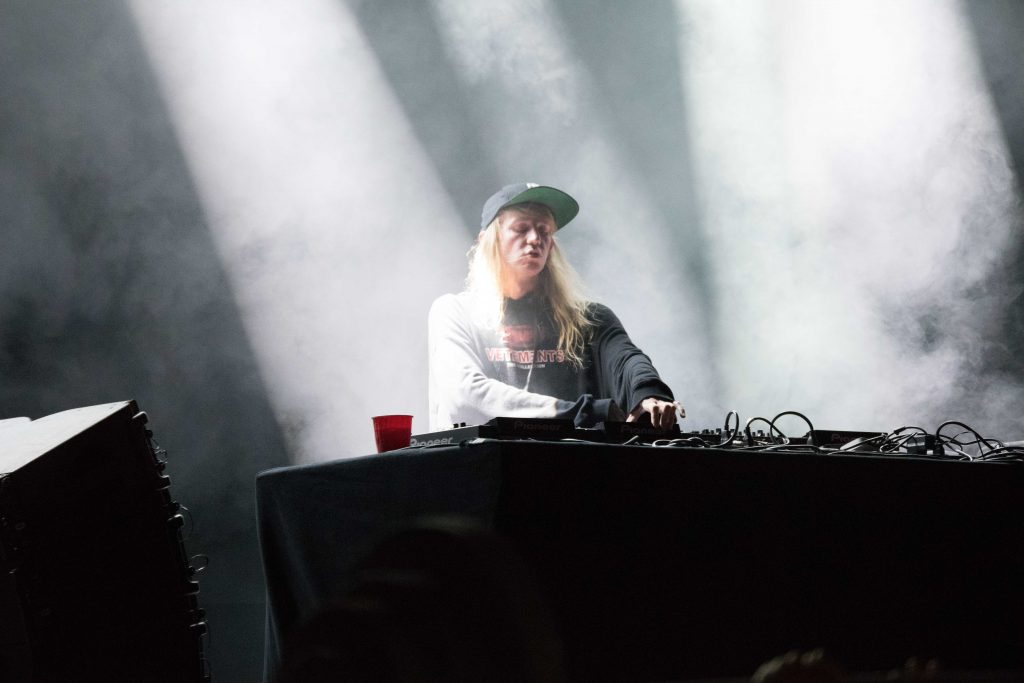 Maddy O’Neal: A female in electronic music! O’Neal’s chill beats and heavy, pared down bass lines were right on brand. Compare to artists like Manic Focus.

Cofresi: Give this man some drumsticks and he’ll make you move. Earthy electronic vibe with lots of reverb and driven bass. 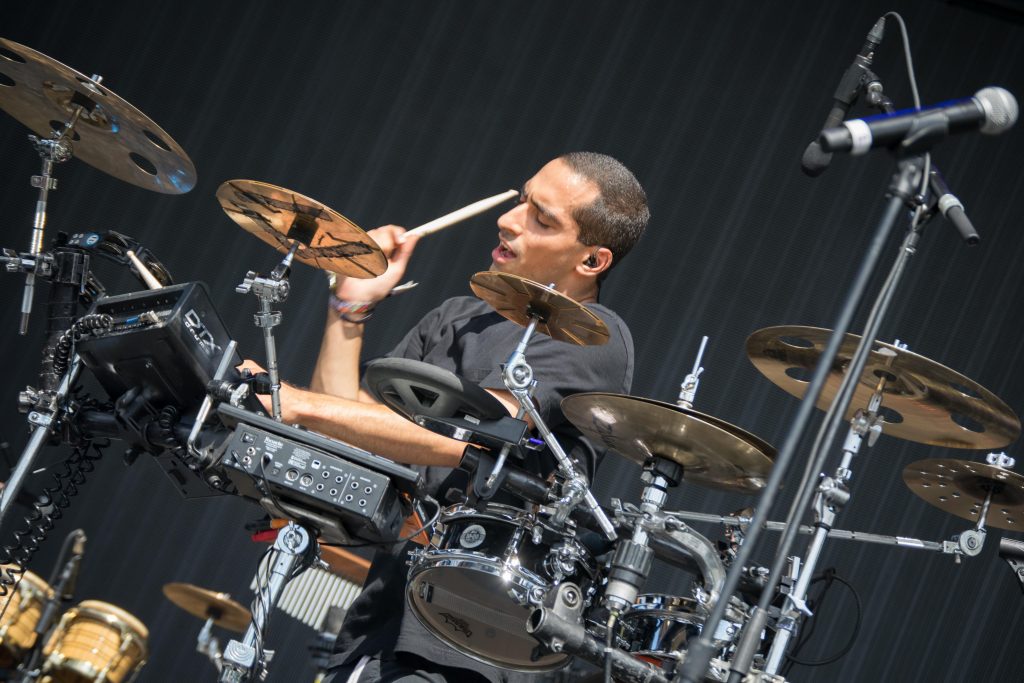 Crywolf: Some of my best photos of the weekend came from Crywolf, due to an overflowing amount of drama that matched his darker electronic sound and scratchy, soaring vocals. 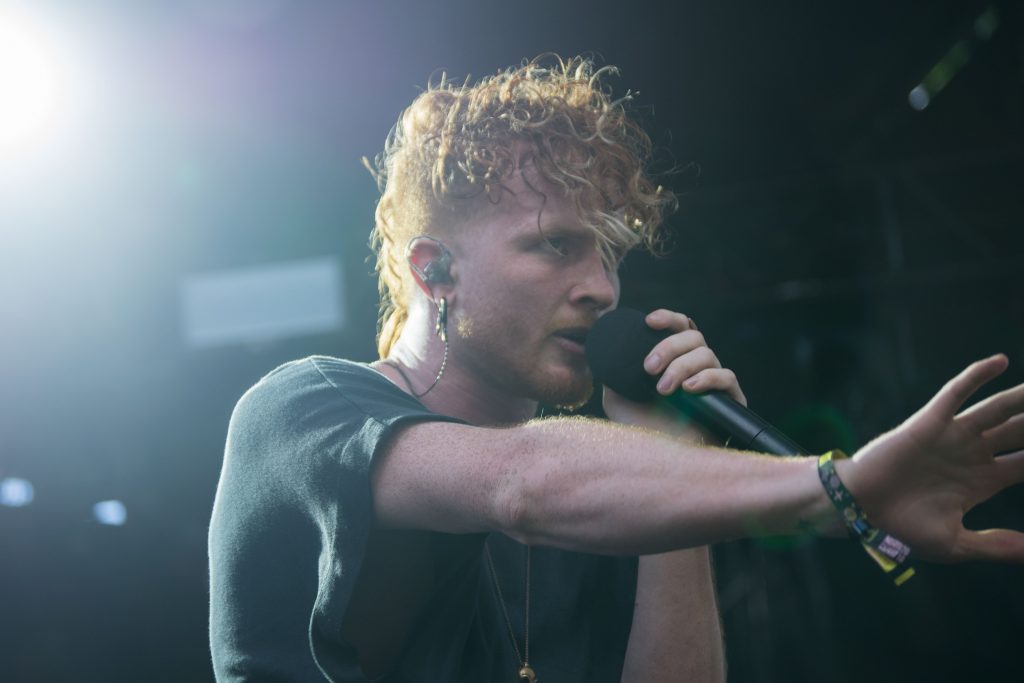 Nombe: I’ve been a fan ever since seeing his lyrics on Twitter a couple years ago, and was totally fulfilled finally seeing him live. Better told through photos, since he’s so dynamic on stage. 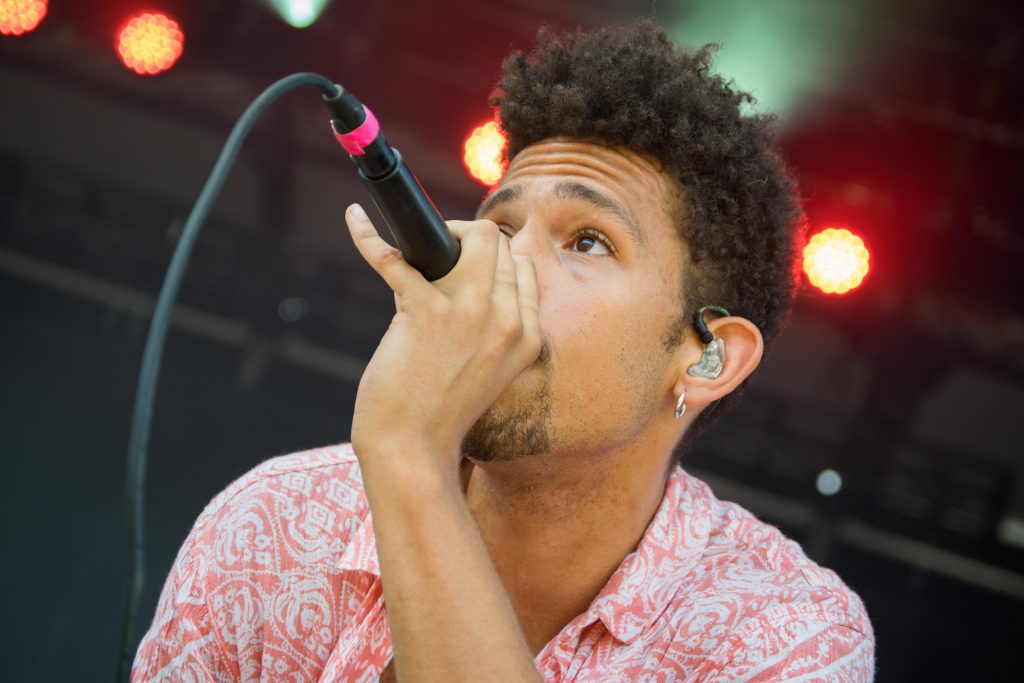 Kami: The crowd adored this Chicago-based rapper. A multi-tasker, taking off his bright blue suspender straps while the lyrics were flowing. 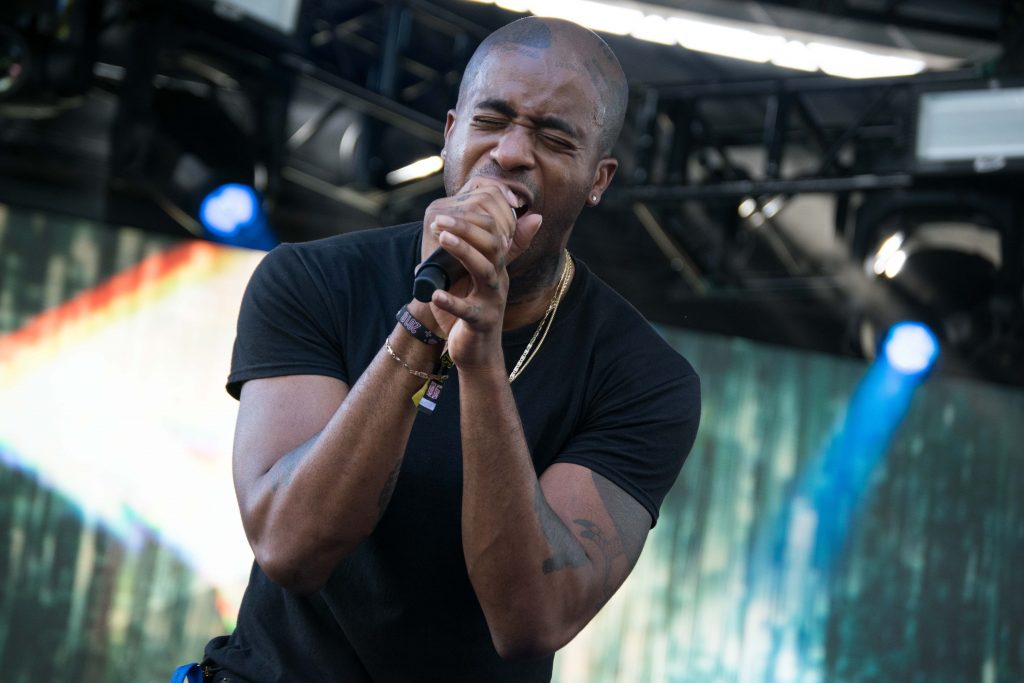 The Midnight: So sweet! So soulful! I sat down in the grass with some friends for this one, swaying and vibing out. 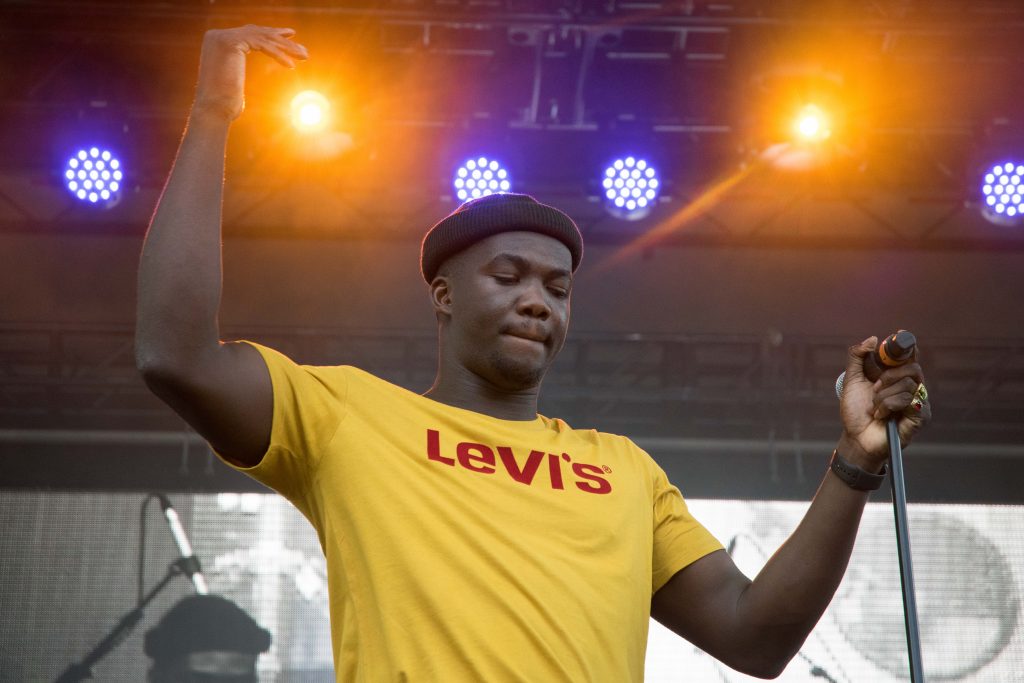 Moon Taxi: Similar to The Strumbellas, but a little edgier. These boho rockers twist genres, giving us a mix of breezy and energizing. 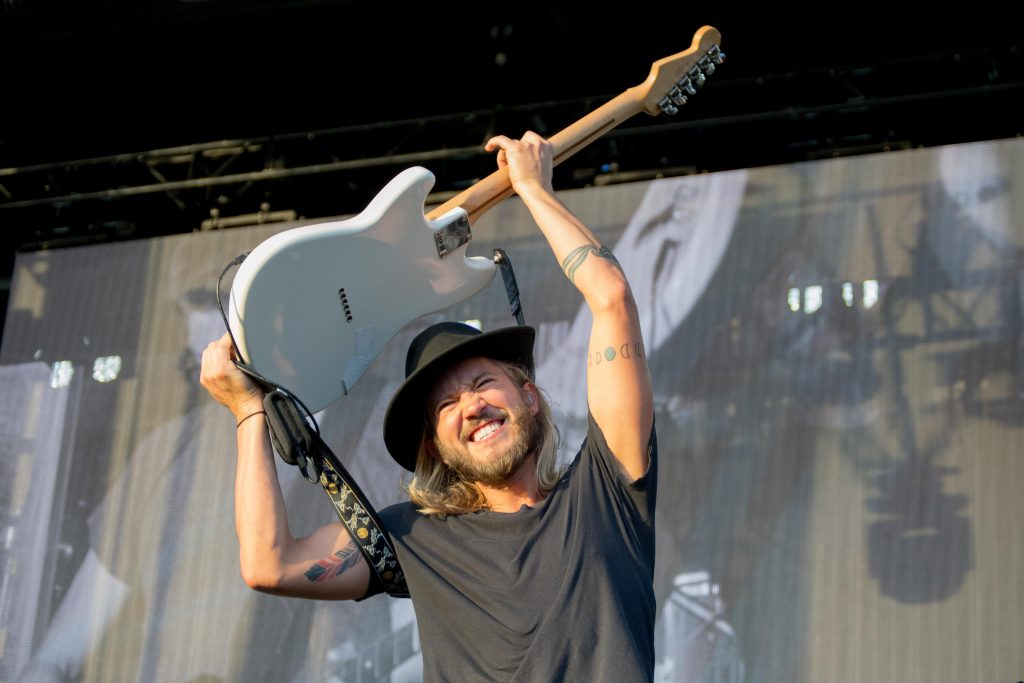 Mura Masa: Alex Crossan, the reserved, artistic Brit known as Mura Masa hung back with his instruments, playing everything perfectly and causing a storm of dancing bodies. Crossan was joined onstage by Fliss, who handled most of the vocals and provided a welcome contrast with her power and liveliness. 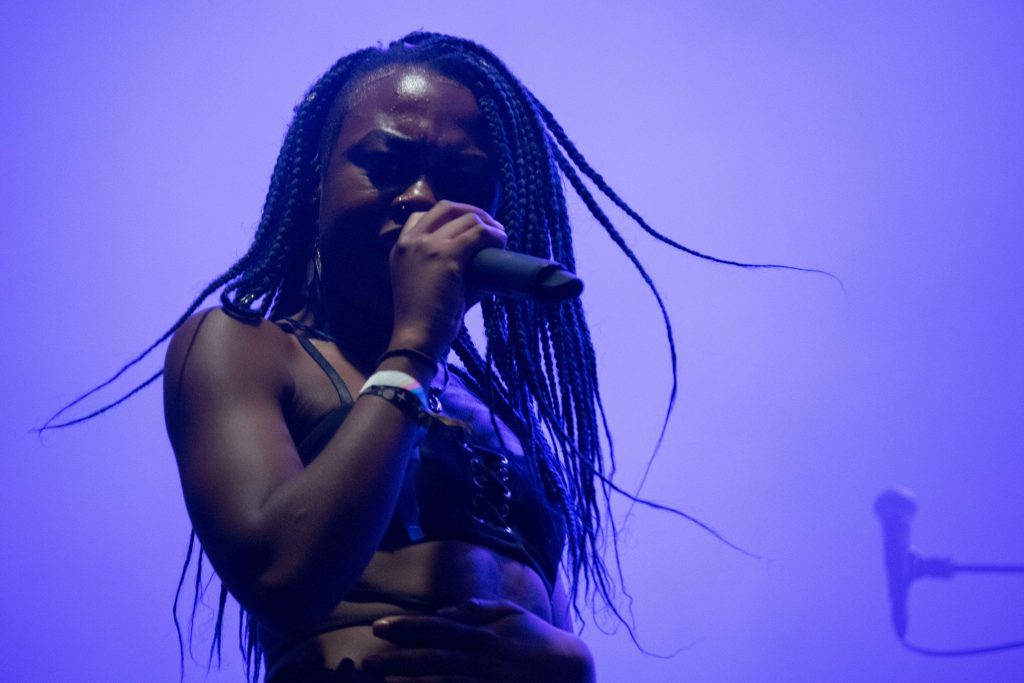 Jamiroquai: Returned to the city for the first time in over a decade, and frontman Jason Kay proclaimed he would pick up right where he left off. Such a confident and eccentric performer. Truly entertaining and classic. 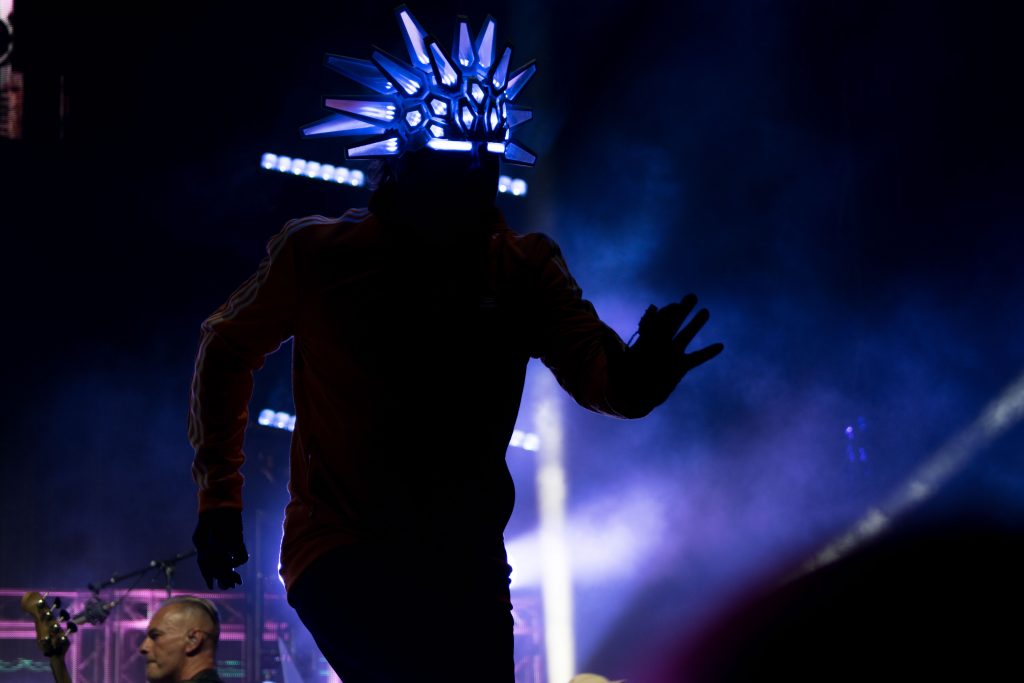 Yellow Claw: The electronic duo ended the weekend on a high, loud and energy-charged note. Vibrant big room house, techno and trap made for pulsing dance melodies and soaring BPMs. 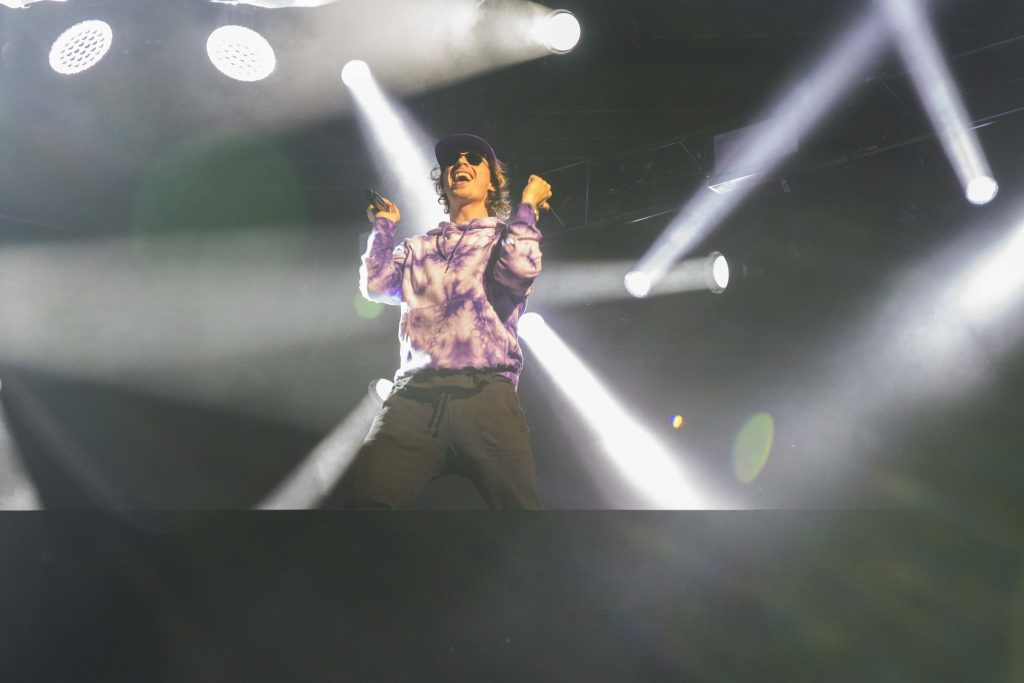 Special mention for the silent disco, which provided a necessary break from main stages and was the most consistently packed area of the entire park. Featuring local DJs, it maintained an anything goes, basement concert vibe.