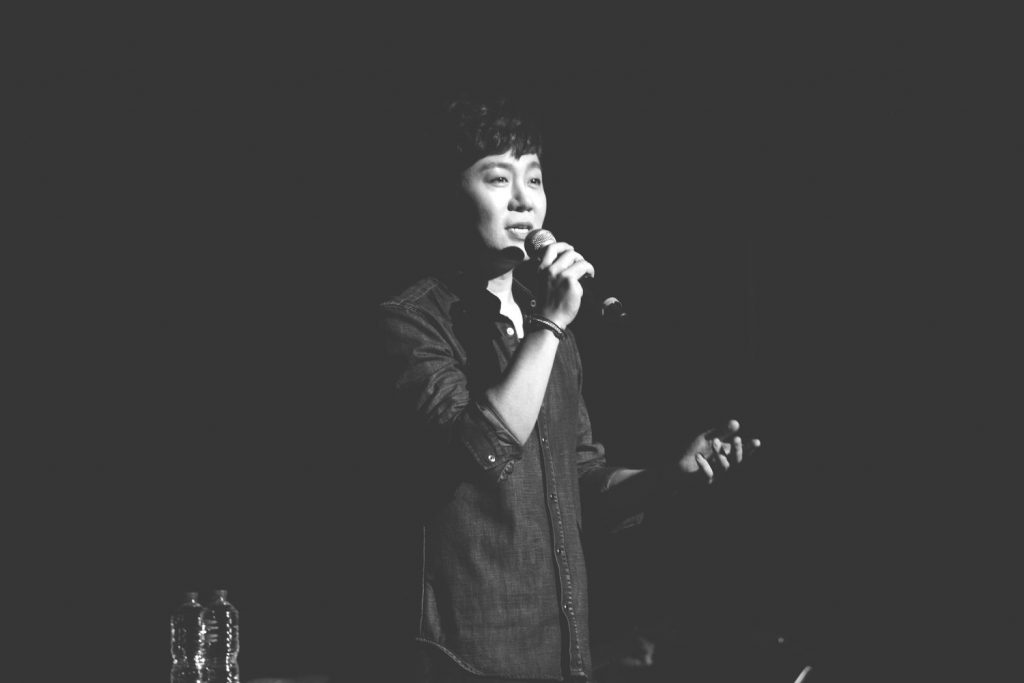 Nothing Better than Jung Yup

The North Shore Center for the performing arts was filled with soulful music Thursday, October 20 from 7 p.m. to 9 p.m. Jung Yup, a member of the Korean ballad group Brown Eyed Soul, had agreed to sing as part of a fundraising concert jointly hosted by Korea Daily Chicago and the Korean American Sports Association of Chicago (KASAC).

Jung Yup is a nephew of the president of KASAC, Hong Byung Kil, who organized this event to raise funds for KASAC’s entry to the 19th Korean American National Sports Festival (KANSF) set to be hosted in Dallas, Texas, June 2017.

The stage felt as though it was set in an orchestra (to be fair, North Shore Performance Center also hosts orchestra performances). The audience were all formally or semi-formally dressed, a completely different vibe from a hip hop or rock concert where people are much more energetic. When Jung Yup came up onto the stage himself, he gave a sincere promise to the audience that he would do his best to convey the emotions embedded in his songs, which are predominantly ballads.

Park is the most renowned jazz guitarist in Korea, while Ahn and No were both active session members in the Korean indie music scene. Uniqnote is a singer-songwriter who wrote songs for groups like Fly to the Sky and Brown Eyed Girls. The acoustic collaboration between Park and Jung Yup were especially poignant, awing the audience with covers of YB’s Cigarette Girl and Yoo Jae-ha’s You in My Arms.

Surprisingly, unlike at a vast majority of concerts, there were only a few phones out to record the show throughout the concert. When Jung Yup started off the show with What a Wonderful World, everyone was silent and listened in as they immersed themselves in the performance. They seemed to be pointing out that our own eyes and ears are probably better suited for concerts than cellphone cameras are.

Due to Brown Eyed Soul’s legacy as a group of lush R&B-flavored vocalists renowned for their harmony, it was hard to initially fathom how Jung Yup would be able to fulfill that expectation on his solo concert. Jung Yup and the band pleasantly surprised the audience with a wide variety of arrangements, starting from the moody acoustic covers to groovy and jazzy tunes. The audience had little time to be bored.

Jung Yup was relaxed and enthusiastic on stage, taking his time to talk with the audience. He also tried to share his enthusiasm with the crowd as he set up the audience for an interactive session during one of his songs, so everyone could sing along in the chorus. He walked off the stage into the aisles while singing a Bob-Marley-inspired reggae/jazz interpretation of Peter Frampton’s Baby I love your way, taking selfies with the audience and passing the microphone to them. At this point, the show was not just a place to relate and immerse oneself into the songs, but it became a place where everyone had fun in an opportunity to sing with their favorite singer.

Saving the best for last, JungYup ended with Its Love, an OST for the Korean TV series Doctors. Before he sang his last song, he told his fans that if enough people screamed “encore” after his song, he would come back onto the stage for one more song. He even went off to say that he always stands at the edge of the stage behind the curtain, preparing himself for the encore. Once the song ended and people excitedly screamed “encore” to call him back, JungYup returned and joined forced with the guitarist Park in an acoustic rendition of You, In My Arms, an original song by singer Yoo Jae Ha that Jung Yup had covered on Yoon Do-hyun’s MUST, a Korean music TV show hosted by the leader of the rock band YB.

Overall, the concert was a fun and interactive experience. Jung Yup told us that people are welcome to ask him anything they wanted to ask about his personal life. His female fans took advantage of the opportunity to scream how good looking he was and ask whether he had a girlfriend. Jung Yup comically welcomed them, requesting them that they send in more praises as it “makes him feel like a star.” And a star he was indeed.

My Valentine is from his most recent full album “Merry Go Round.” The music video features the Korean actor Lee Jong-suk.

Jung Yup first rose to fame with Nothing Better. Even today the vast majority of people know him for this song, and it is a staple at his concerts.

Special thanks to Korea Daily Chicago for providing the materials for this publication.

If you want to learn more about Korea Daily Chicago and its event schedule, check out their website and social media.