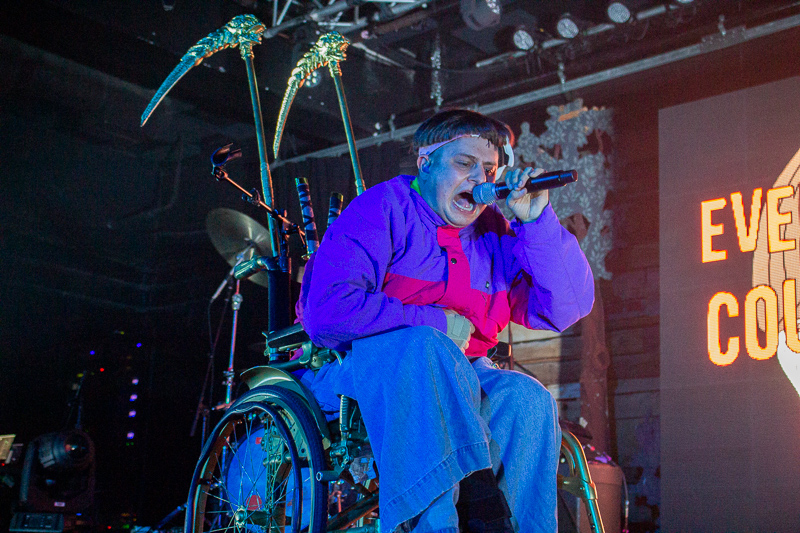 Never have I seen a denser concentration of bowl cuts and Dixie cup hoodies than I did among the audience at indie meme rapper and scooter stuntman Oliver Tree’s concert at Concord Hall earlier this November.

After his hit song “When I’m Down” went viral in 2017, Oliver Tree has continued to make waves in the indie-rap scene in the U.S. and abroad.  Unfortunately, a myriad of health issues — including a busted ankle — that he has suffered since the beginning of this year casts uncertainty on the future of his career. However, that night it became clear that Oliver was not going to let his health hinder him from delivering a mind-blowing and hilarious performance for his expectant fans.

NVDES, Los Angeles-based indie electro-pop outfit and self-proclaimed “spiritual advisor” to Oliver Tree, opened the show with a series of EDM bangers that invigorated the audience. His set successfully energized the crowd for the epic meme-ry that was to come.

The second opener, Tommy Cash, a meme-rapper and conceptual artist from Estonia, performed a simultaneously uncomfortable and hilarious set. For the first half of his set, he zoomed around the stage on what seemed to be a wooden hover board from Medieval Europe. The second half of the set shifted focus to the screen behind him that displayed his strange music videos, including one where Tommy’s face replaced a variety of those depicted in Renaissance portraits, including Mona Lisa and, at the end, Jesus. After Tommy’s set, the crowd’s energy hung thick in the air as they waited in anticipation for Oliver.

I knew the night was only going to get crazier when Oliver Tree, donning his iconic pink tracksuit and wrap-around, red sunglasses, was escorted on stage in a wheelchair with death scythes for handles by a team of instrumentalists all garbed in Dixie cup tracksuits. The crowd sang along enthusiastically as he broke out into Getter’s “Forget It,” a song he featured on a few years ago.

After this first song, Oliver stated that the show was the last show of his last American tour, and mentioned that he had ignored his doctor’s advice to cancel the remaining shows. He also noted that due to his hurt ankle, he would be unable to perform his signature scooter stunts. However, the crowd seemed unwavered by the news and instead showed their support for him and excitement for his set.

Despite his health condition, Oliver delivered an insanely entertaining performance that even included some wheelchair stunts and creative dance moves. His energy was unmatched as he kept the crowd entertained with hilarious anecdotes and obnoxious wardrobe changes, including one that paid homage to the square shoulders meme from Kanye and Lil Pump’s 2018 song “I Love It”.

At various points throughout the show, he showered the audience with Dixie cup merch, sparkling fedoras and cowboy hats, and even what seemed to be real money. He also gifted the audience with some sneak previews of unreleased tracks, including “Cash Machine,” to which the crowd moshed.

Oliver Tree’s performance was as entertaining as it was meaningful. Throughout his set, he stated multiple times that he just wanted to be an inspiration to people, and repeatedly expressed his gratitude to his fans for their support. He ended the concert by encouraging his fans to see the value and beauty in themselves. His effect on the audience was evident by their warm expressions.

Oliver Tree’s music and stage presence is truly one-of-a-kind, and makes for an unforgettable concert experience. I would love to see more of Oliver Tree in the future, hopefully in better health!