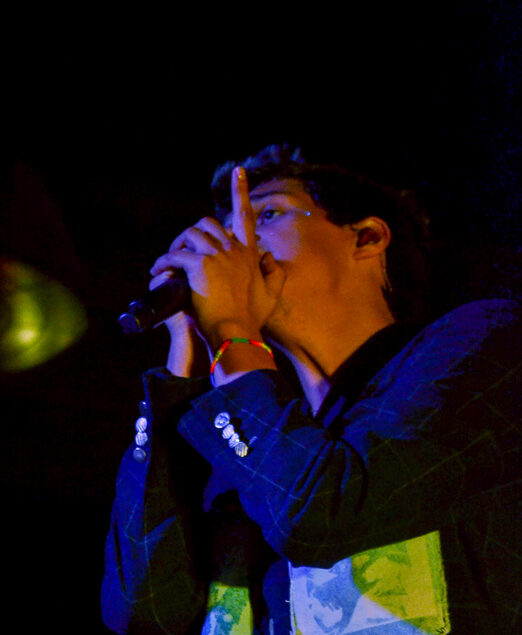 My instinct tells me to jump into a pretty straightforward analysis of the musicality of a performance. I’ve started many an article with lists of aural descriptors and dipped into note-taking in time with a show’s first sound rather than its first sight.

As soon as Omar Apollo stepped onto the stage at Concord, however, I realized that a concert like this — in a venue illuminated by the energy of an eager audience as well as by the fixtures pointed at the stage — is as much a feast for the eyes as it is for the ears.

The show began with the first of two opening acts, indie pop band Silver Sphere, led by its vocalist, a 20-year-old Chicagoan who simply goes by “Silver.” Before the commencement of her eclectic performance, the singer made her entrance in a short, sequined blue turtleneck-and-dress combo and knee-high white vinyl boots. Blinged-out eye makeup added to the look — a small detail with mighty impact fit for the playful nature of the songs on her setlist such as “boys in bands,” a feisty bit built on a bassy percussion line and embellished with synth ornaments as sparkly as her dress.

Strangely, the artist chose to interrupt her flow with uncalled-for sharp turns into heavy autotune not present in her recordings which, while in many cases could have musical merit, in this instance became a repetitive crutch that lasted for stretches of time and recurred throughout the set with no apparent strategic placement or intention.

Despite the questionable production choices, Silver’s bubbly stage presence and constant movement managed to keep the audience relatively roped in.

After the period of explorative, bouncy electronic pop, we were greeted by R&B up-and-comer Dijon Duenas, professionally known as Dijon. The Baltimorean singer and his band brought with them a presentation of mellow beats and Dijon’s own soulful expressive voice, as well as a visual aesthetic arguably opposite of that of Silver Sphere. An olive green baseball cap accessorized his look, headlined by a white t-shirt, black overalls and a flannel. The minimalistic fit partnered with a lowkey set effectively turned the spotlight toward his rich, soulful music. From the wispy guitar and light drums of “WILD” to the melancholic dissonances of “Drunk” to the more upbeat, percussive and pensive “Skin,” Dijon had the crowd in a daze. He paired expressive vocals with entrancing coordination with his band and the simple but weighty accompaniment it provided throughout the set.

Upon the conclusion of the opening acts, I secured a spot in the pit near center stage directly in front of where a team member had just placed a mic and waited for the man of the hour to make his appearance. This is the Hobart-native, Mexican-American R&B singer Omar Velasco’s second tour, following the release of his album Friends.

He leapt onto the stage to the deafening excitement of his audience and I, with my hand on my camera lens ready to take a steady shot, watched as the first thing he did after picking up the mic was knock over the stand and begin galloping, in a photographer’s nightmare and VIP pass holder’s dream, from stage right to stage left to center and back again.

Velasco was fitted with glossy vinyl pants and Bonfire of the Vanities’ cyanotype blazer — complete with a silver pocket chain — creating a novel look all tied together by a brush of glitter and a conspicuously large rhinestone placed on each side of his face in a playfully on-brand call for attention.

Although a relatively small crowd, the energy in the room was insurmountable. A new wave of deafening screams was born with each change of stage direction, each of his signature, dizzying pirouette-esque twirls, every interaction with Oscar Emilio or Manny Barajas of his band during a solo. At one point, a faint “take off your shirt!” emanated from somewhere within the sea of onlookers, to which the security guard beside me responded, “play some good music!”

And that he did; theatrics aside, Omar Apollo’s performance hit the nail on the head.

Generally speaking, it’s easy to give more credit to a recording than the artist who made it, what with the abundance of varying technological tricks so often snuck into a listener’s ear. But the array of delicately placed sounds and traits of musicality ever-present in Velasco’s work did everything but fall through during his live performance.

Throughout the hour-long show, he and his band remained consistently in key and tempo. Velasco’s perfect execution of high note after high note with the grace, style and spunk his fans know and love freed him of the need for haphazardly executed cover-up notes all too common in other live shows.

After a few pieces off his albums Friends and Stereo, Velasco picked up his guitar for a solo vocal-strings take on his 2017 single “Brakelights” as the stage turned a deep red in a matter-of-fact agreement with the title of the song. The room quieted, its energy honing in on the spectacle that was him and his guitar planted front and center, and he broke into a tender rendition of the piece, nothing but his own guitar accompaniment intertwining with his lyrical voice and ornamented with the light and airy breaks that so specifically characterize his sound. He transformed the section of the song typically filled by a guitar solo into a mimicky scat, showing off a vocal stunt that left the audience dumbfounded. Velasco relished in everyone’s undivided attention for a few more bars before “[doing] it for real now,” pulling in Manny Barajas and Oscar Emilio who joined on bass and guitar, providing repetition of a circular chord progression while Joey Medrano caught up with percussion, giving us a more recognizable version of the song.

The innocent question, “Y’all like Freddie Mercury?” served as our only warning before the band dove into its stunning interpretation of Queen’s “Cool Cat.” Velasco dazzled the audience with his affinity for high-octave riffs that should be well out of his range but which he delivered effortlessly. Mid-range sections of the song streamlined into the space with pinpoint focus, his voice like butter. The vocals were accompanied by the song’s timeless beat satisfyingly executed by Emilio, Barajas and Medrano in an impressively uncanny imitation of the original song. Omar Apollo takes a piece synonymous with his musical style and tweaks it just enough to fit his personality to create a cover that I, and undoubtedly many others, wouldn’t mind hearing a recorded version of in the near future.

After a hyped-up presentation of “So Good” for an encore, Omar Apollo returned to the stage once more for his staple finale, “Hijo de Su Madre.” The floor of Concord Music Hall felt ready to give out with each beat of the drums and subsequent jump of the audience, but now was not the time to question the structural integrity of the venue. Every inch of the stage supported the band or its several friends who had rushed up to join in; the group’s bassist could be seen playing his instrument over his head while another member did laps around the stage and photographer Vin Romero lay on his back trying to capture it all.

It was a fitting cap on the events of the night. Few artists are capable of a good live performance, but Omar Apollo provided his supporters the reassurance they want that the rapidly rising indie artist they’re so enamored with has a talent as tangible as the fan-filled audiences that’ll grow with each live show he continues to put on.