The intensity with which these words were said; the loud, catastrophic beats that encapsulated the room as they were delivered; this is something I don’t think I could ever forget.  The pain and frustration of the performance pierced through the room, begging for a place to belong and to be heard. These kinds of intimate interactions are what set our relationships with other people, and how we relate to the systems that have brought us here today.  This was the essence of Ono and Glad Rags set, standing as a reminder of how we may experience music differently.

Glad Rags is an orchestral pop collective based in Chicago that offers another reality to pop music.  As historian John Dower once belayed, “to enjoy music is to admit defeat.” We allow sonic waves to enter our bodies and control our movements as we go about our daily lives.  Even when we talk about artists, we use aggressive words such as “this artist demands attention” or “commands the stage.” Yet, I think what makes Glad Rags such a promising band is their focus on the space they occupy and how they work to incorporate the audience with their sound and performances.

Working from a recently released album, Glad Rags offered a wide range of songs that were at times a dancey disco burner or a quieter sentimental ballad, all offering a hand into their world.  What I think sold the performance was the extent of seeing such a large band so close in a round setting. Being able to see the performers be so into what they were doing was not only inspirational but made me and other audience members feel like it was okay to express ourselves with the music.  This was not a defeat by any means, rather a conscious decision to strive towards something greater together. 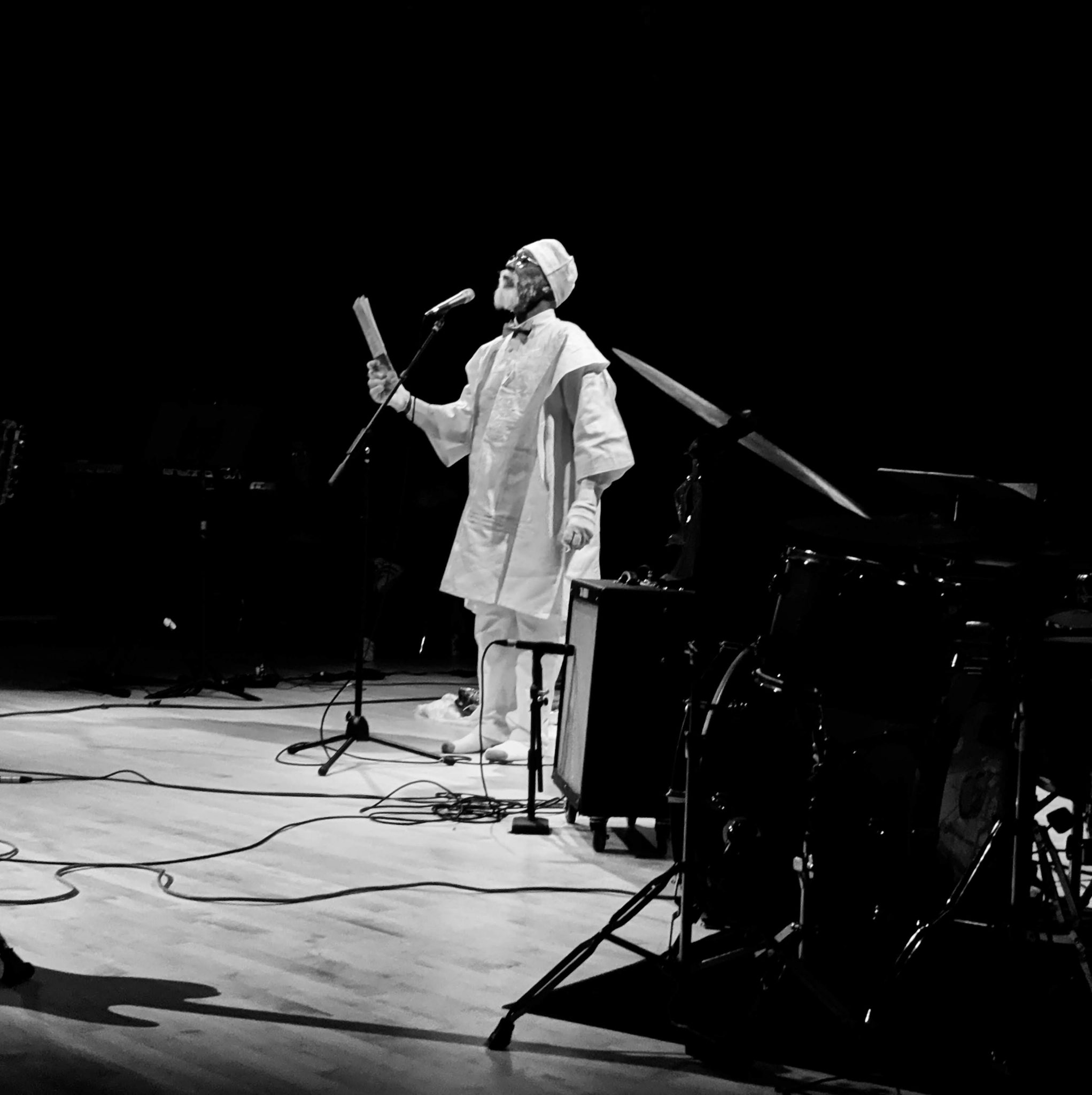 Ono then performed a set that was written and performed first in 1982 in dedication to J. Robert Oppenheimer, creator of the atomic bomb.  Ono’s performance in three Acts, featuring Mimi Tolva, Joshua Virtue, and Ruby Watson, offered an explosive and methodical journey through the pains and horrors of nuclear energy and more broadly the actions and decisions that we chose to make.  We are reminded that decisions by those in power that may feel like ancient history still have lasting effects on us; why do we feel out of place? Things were not supposed to happen this way. I’m not supposed to be here. 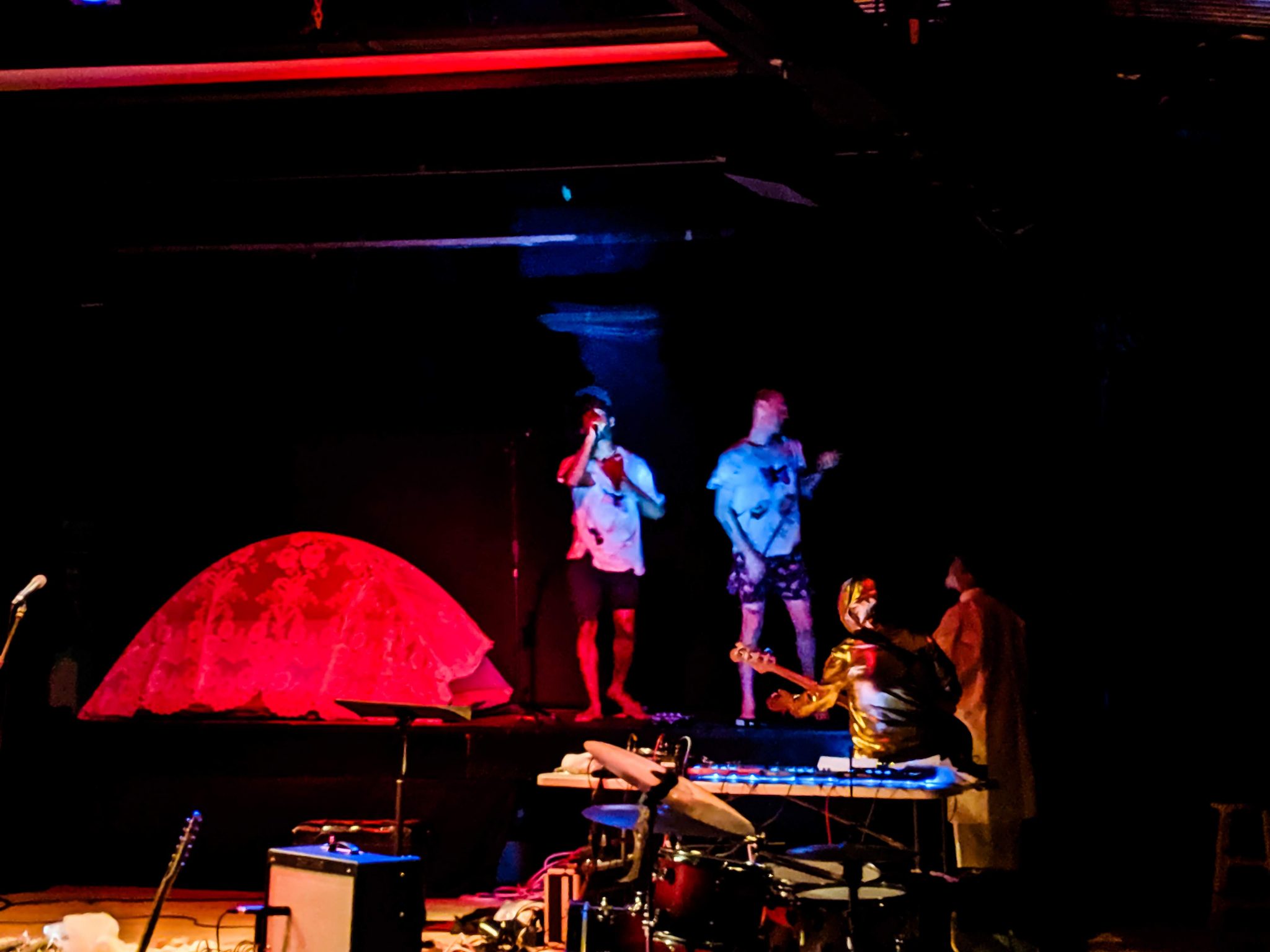 No matter how hard we try to resist, the propelling motion of music and the powers that be guide our journey and all we can hope to do is take note.  If there’s one thing that you could say about Ono, however, is their solid communication through all of the noise. Their playing is always together, building to generate powerful walls of sound.  However, what really sells it for me is their moments of silence. Individual member’s involvement in the local Chicago scene and their genuine interest in the progression of music speaks louder than any amount of feedback.   On and off the stage, Ono’s legacy carries its message far beyond the relatively brief moments of music.

Despite how we may have ended up in our disposition, what is for certain is that we are not alone.  We can struggle together, we can work together, we can grow together, and we can dance together. Through the negativity and pessimism of the modern day, we can find the seeds of optimism.  Ono is one fully bloomed flower that has spread its seeds throughout Chicago and the underground music world. What’s resulted is something more powerful than what Mr. Oppenheimer could ever have imagined.  Though, instead of telling you, I hope that you can one day experience it for yourself.