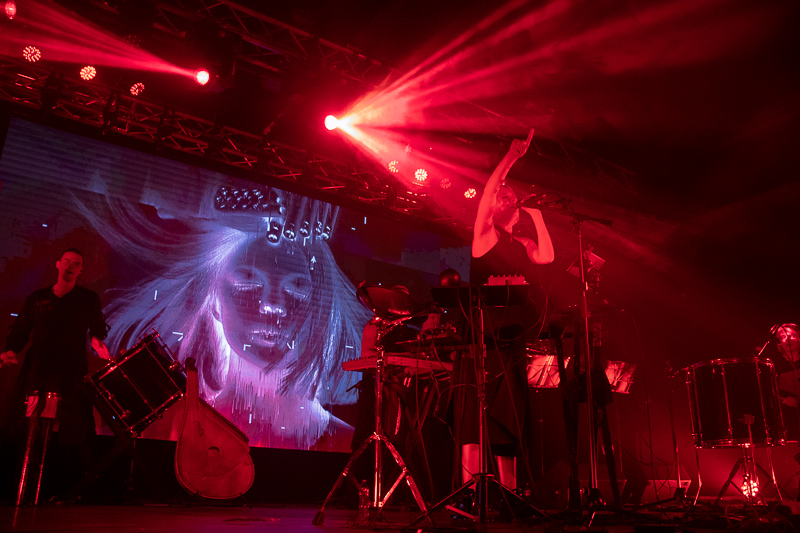 The silent audience’s anticipation was tangible as the stage lights dimmed and Onuka’s frontwoman, Nata Zhyzhchenko, garbed in a tattered, draping black dress and dark, circular glasses, took her place center stage. The trembita, a long alpine traditional Ukrainian horn, sounded the bombastic first notes of “Around Me” off of Onuka’s 2014 self-titled studio album. The two-hour long ethereal audio-visual spectacle that proceeded left me speechless and inspired.

Onuka is an experimental electronic-folk band from Ukraine that innovatively incorporates traditional Ukrainian instruments into modern pop, electronica and house songs. The band’s songs are often a bilingual mix of English and Ukrainian, although some songs are sung exclusively in the band’s mother tongue. Onuka means “granddaughter” in Ukrainian and was founded in 2013 with the goal of honoring Zhyzhchenko’s grandfather, a renowned Ukrainian traditional instrumentalist, by introducing young Ukrainians to traditional instruments. The band gained sudden popularity in 2017 when they performed an interval performance at Eurovision. Since then, Onuka has become one of Ukraine’s favorite artists and has also gained popularity across Europe and the rest of the world. Onuka’s popularity was made evident by the fact that nearly the entire crowd, which seemed to be composed exclusively of Ukrainians (of all ages) save for myself and my friend, sang along to every song.

Their set included energetic fan favorites such as anti-war anthem “GUNS DON’T SHOOT,” and “ANIMAL,” both off of their most recent album Mozaïka. The stage became a dance floor set against a backdrop of vivid and futuristic animations as the band members danced vivaciously to the music, their enthusiasm and passion radiant and contagious.

In the middle of the set, the band included an emotional tribute to the victims of the War in Donbass that has plagued Ukraine since 2014. Zhyzhchenko switched between English and Ukrainian as she spoke passionately about the band’s commitment to contributing to world peace and honoring the victims of war.

Their performance of “Vatra” off of Mozaïka opened with a hauntingly beautiful flute solo by Zhyzhchenko, accompanied by an Underworld-influenced hypnotic beat.

My favorite performance was that of “ZENIT,” a single released earlier this year and my personal favorite of their discography. The layered instrumentals, combined with Zhyzhchenko’s angelic vocals and the dynamic, swelling crescendos of the horns and drums made for a truly transcendental experience.

Onuka closed their show with an encore performance of their 2018 single “XASHI” (or хащі in Ukrainian), a hypnotic dance number accompanied by layered whisper-mumble vocals, to which the band and audience danced vigorously.

This concert stands as maybe the best I have ever attended. Onuka crafted a truly unforgettable and transcendental experience for the audience, and I am so grateful that I had the opportunity to experience it.

For first time listeners, I recommend digging into Onuka’s most recent album Mozaïka on their interactive website https://www.onuka.ua/en/ or on Spotify.  I also recommend checking out their songs “ZENIT,” “Time” and “Around Me.”

If you’re looking for artists similar to Onuka, I recommend looking into Luna, Karyyn, and Jambinai.  Luna is a Ukrainian singer who has reached legendary status in the Ukrainian indie-pop scene. Karyyn is a Syrian-American singer-producer who makes haunting, ethereal music about her personal grief caused by the Syrian War. Lastly, Jambinai is a South Korean band that reimagines Korean traditional music by fusing it with rock and metal.