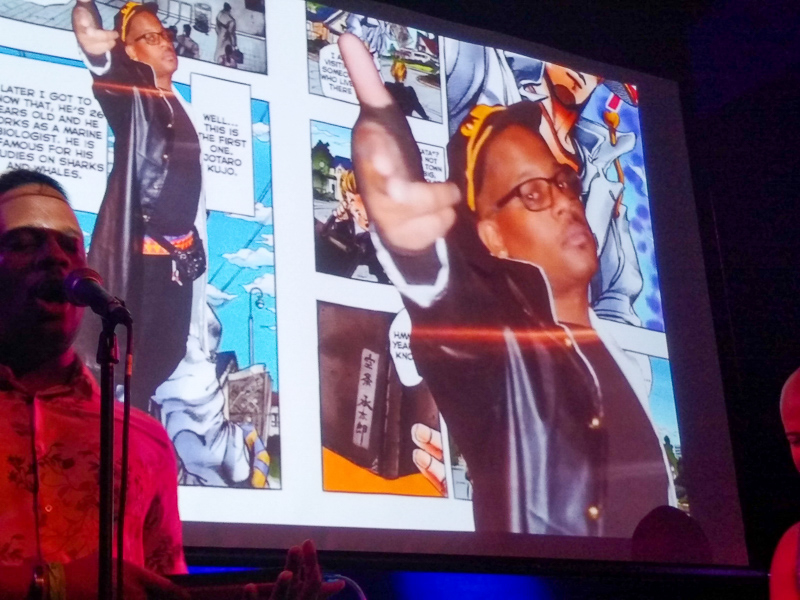 As Open Mike Eagle’s (OME) career has progressed, he has continued to merge his passion for comedy and entertainment with his primary focus of hip-hop. Open Mike has dubbed his style as “art rap,” and it’s easy to see why, as just this year Open Mike hosted an eight-episode Comedy Central series, The New Negroes, that included original music videos for each episode. That style may lend itself to seeming gimmicky or unoriginal, but the effort and honesty OME puts into each aspect of his art is apparent, either when watching a live concert or a pre-recorded show on network television.

Listening to Open Mike rap feels like he’s inviting you into his living room, smoothly recounting stories about his childhood growing up in Chicago or his observations on society, over low-key beats. Walking into Schubas felt like stumbling into OME’s personal enclave, a dimly-lit room with some of Mike’s friends and family standing on the side of the small stage. The first opener, Video Dave, who has worked with OME in the past, made sure to have a small conversation with nearly everyone in the audience before making his way to the stage, where he assumed the identity of Dr. Estacio J. Villa, Esquire, a hack entrepreneur-type promising (begging) to turn the audience into millionaires if we would just buy into his “program,” getting big laughs. Video Dave’s sales-pitch set was complete with promo videos explaining the steps of this self-help course. But after each video, loud trap beats would flow throughout the room, he would drop his act, and brashly and boldly rap about the concepts he discussed in the video. It became apparent Video Dave would rap about his life hustling on the streets of Chicago or New York, and his alias of Dr. Estacio J. Villa was just conveying those same principles in an over-the-top hilarious way. His set blended with OME’s concept of comedy and art-rap seamlessly, and set the tone of a low-key, entertaining, and comedic night well.

New York-based rapper/producer Elucid took the stage next, and delivered a strong set over some moody beats, rapping with clear passion and intensity about social and political issues, as well as how they connect to his own life. It’s a style and subject matter he has become known for, especially in the east coast underground scene, yet his stage presence is warm and charismatic in a very natural way. Elucid joked with us about how sweaty his hands are when he performs, and when he experienced some technical difficulties, he invited a fan on stage to try to help him out. Unfortunately, those difficulties ended his set early, but Elucid only added to the homey vibe of the night.

Around thirty minutes later, Open Mike Eagle, accompanied by Video Dave as a (relatively mellow) hype man, took the stage in front of the nearly 200 person audience, which was packed from wall to wall. Open Mike often, especially throughout his more recent records, exudes a mellow and quiet confidence, which created a personal relationship with his audience as he opened with a few standout tracks from the 2017 release Brick Body Kids Still Daydream, and the 2018 EP What Happens When I Try to Relax. While Open Mike certainly commanded the stage and created a fun atmosphere with steady bars and bursts of emotions, his 70 minute set felt less like a spectacle and more like Mike recounting his favorite stories for only those who care to listen. When he shouted out his people from the South Side before “Southside Eagle,” the response was loud and genuine, and OME returned the favor by debuting some unreleased material and chatting with us about what inspired the process. The unreleased material definitely expanded on the comedic portion of his style, with songs such as “A Black Mirror Episode Ruined My Marriage,” “I’m a JoStar,” and “What the fuck is self care?” (on which Open Mike professes “I think I get it finally, it’s going to a winery”).

Even though the unreleased material was very tongue-in-cheek, it’s a perfect example of what makes him special — the material may seem corny, but it is truly from the heart. The bars are tight and OME’s flows are as silky as ever, the observations are funny, and he does a great job balancing satire with honest reflection. It shows that you can never box Open Mike Eagle in, which he declared on “Brick Body Complex,” which brought the most energy and crowd participation of any track during the night, with the whole room shouting “My motherfucking name is Michael Eagle, I’m sovereign.” A few more songs, echoed by the overjoyed audience, capped off the night, but not before Video Dave delivered another unreleased song, tentatively titled “Résumé Song” in which the unemployed Dave puts out his qualifications and eagerness to find work into song form, endearing him to the crowd once more.

Overall, the themes from Brick Body Kids Still Daydreaming resonated throughout the night: Michael Eagle is not just a rapper, comedian, or whatever else you may expect him to be. Open Mike is a person, one with many interests and a passion for combining them, shaped by his experiences growing up in Chicago and using his art to further his exploration of the world. As he talked with fans and caught up with old acquaintances after the show, I couldn’t help but leave feeling grateful I had gotten to experience the connection between a genuine artist and his community that so clearly reveres who he presents himself as. And there’s no reason to think that that presentation is anything other than genuine.