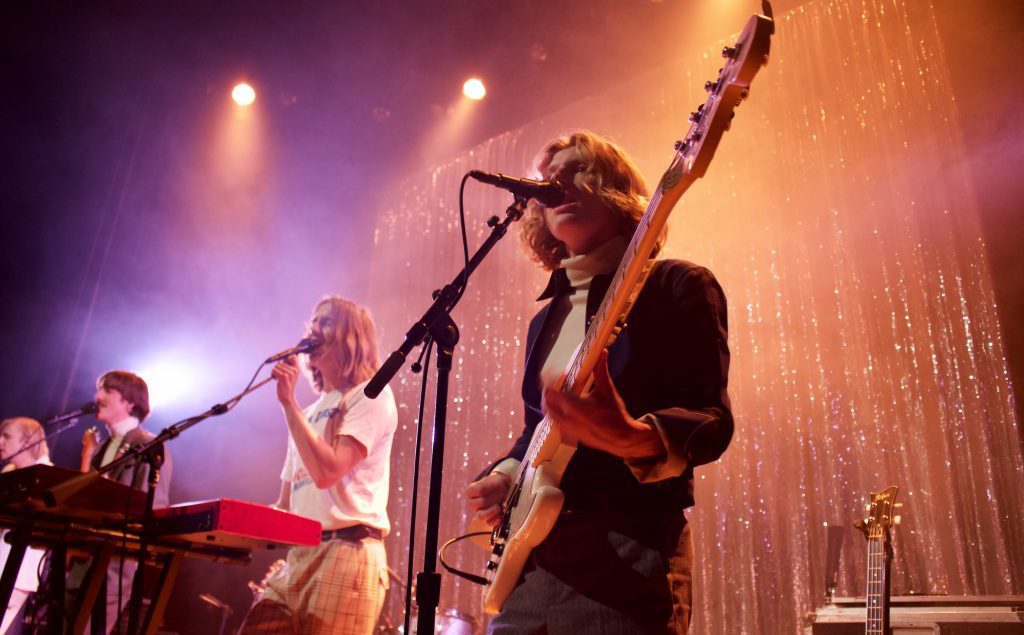 When Parcels took the stage Friday night at Lincoln Hall, the five-member group looked exceedingly put together in their crisp, seemingly never-worn outfits, as if this performance were a new start. Guitarist Jules Crommelin, who bears an uncanny resemblance to George Harrison with his shaggy hair and bushy mustache, was clad in a dark brown suit, white turtleneck, and Blundstones. Keyboardist Patrick Hetherington wore a loose T-shirt with “Star Dust” lettered on it, tucked into tan plaid pants. This tour does mark a new beginning of sorts for the Australian band that relocated to disco central in Germany: it’s not their first time on tour, but it is their first for a full-length album (Parcels released their debut, self-titled album in October). 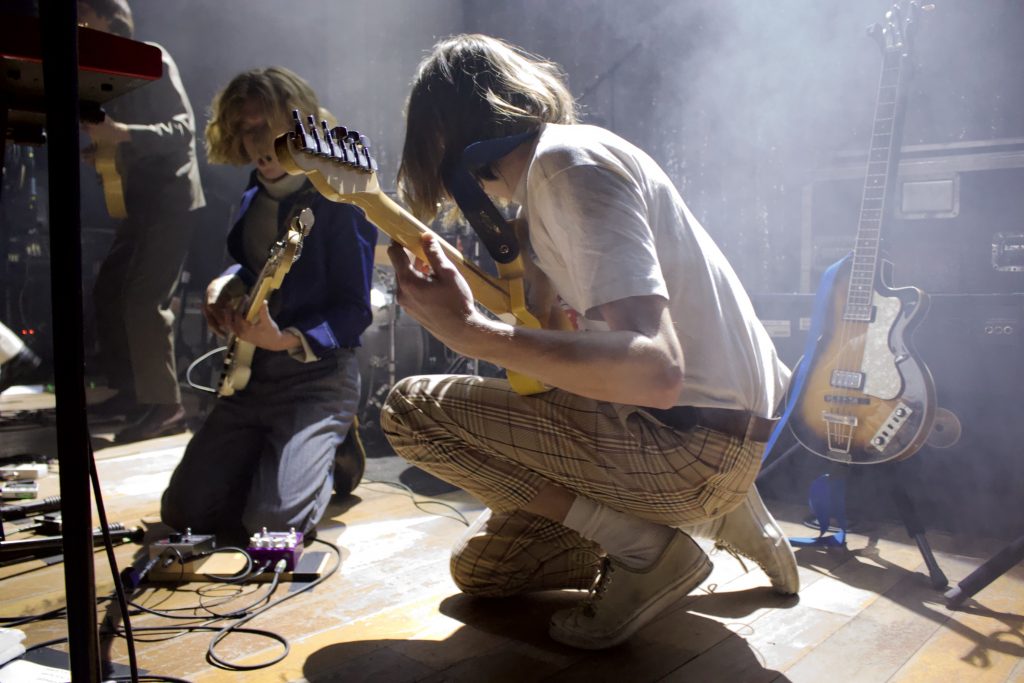 At first I saw the group’s new-looking clothes and Beatles-like aesthetic as put on and calculated, but their genuineness was evident almost immediately, the spell of photo-shoot-perfect appearances broken first when I spotted sweat trickling down Crommelin’s forehead, and second when he opened his mouth to greet the audience, giddy to be in Chicago. Hetherington sipped on tea between songs, which I found endearing. The group’s cohesiveness is clear and part of what I think makes Parcels’ music so successful. No one member is at the forefront of the group; during their performance, they took turns singing songs and chatting with the crowd. 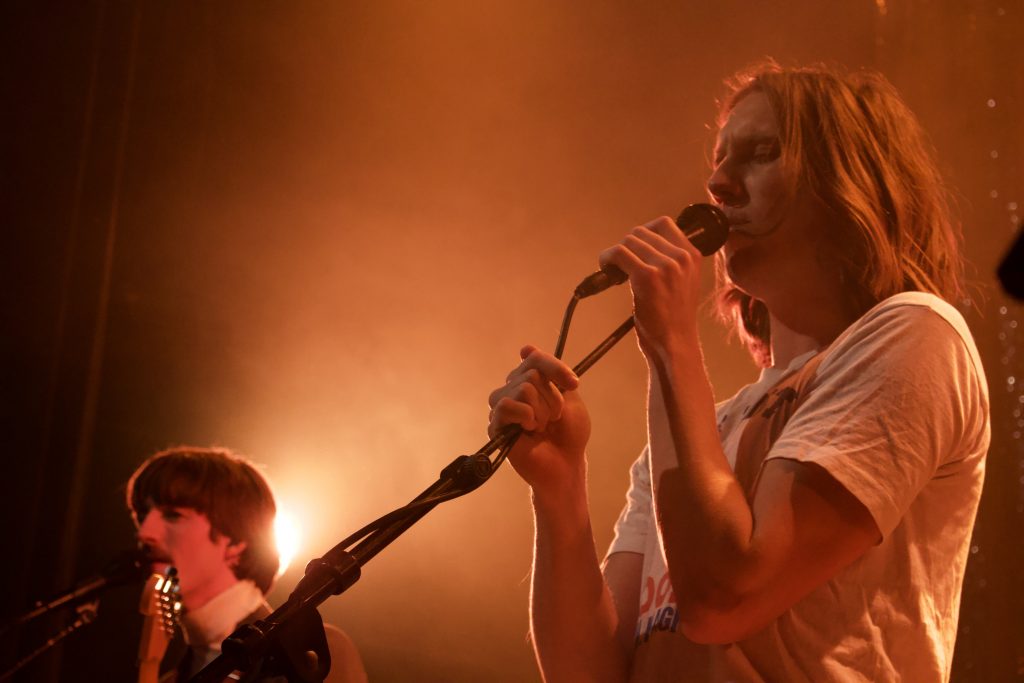 Parcels may have a 60s British boy band look, but their music only partially reflects that. It’s hard to resist dancing to their songs, which edge into pop but are pulled into another realm by disco, soul, and electronic elements. The band opened with “Comedown,” which felt like a warm invitation and initiation into the concert with its upbeat keyboard, quick guitar picking and simple wisdom that “When it falls you can find a way out,” and “When it’s gone you can cry, / let it go and try.” Parcels’ songs lyrics are relatively basic and abstract, but in every other way, their music is complex. Parcels has mastered the art of making music that is repetitive yet hard to stop listening to. Its songs feature pauses that are unexpected but don’t disturb the flow of the music, innumerable catchy hooks, and intriguing layerings of instruments and synths. For the most part, Parcels’ music rejects the traditional pop song structure. 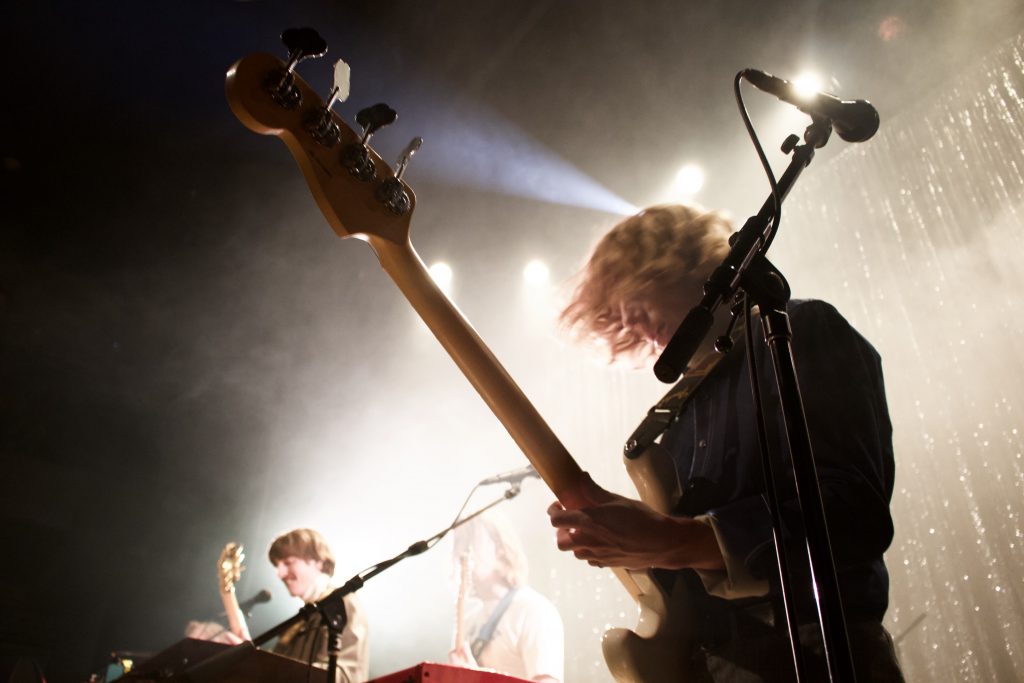 The highlight of the show was the eight-and-a-half minute “Everyroad,” which was intensified by Parcels’ choice to not play the spoken word samples that are on the otherwise instrumental recording. The synth-heavy song built slowly, with upward key changes and increasing volume, before suddenly calming down to expose Hetherington playing softly on the keyboard. He swept his fingers across the keys in a twinkling downward scale just as a wisp from the fog machine clogged my vision, making me feel as if I were falling down Alice’s rabbit hole. After seven minutes of anticipation, the song rapidly crescendoed out of its soft phase into its peak, with reverberating, distorted keyboard noises and pulsing electronic synth noises so low I could feel their vibrations. This climax felt like an explosion, but in the most pleasant way possible. The end of the song brought more applause and “whoops” from the audience than I’ve never seen in the middle of a show. I looked up to the balcony to see a man lifting his arms up and down in synchrony, hailing the band in appreciation.

Parcels ended their show on a reprise of “Comedown.” Each band member set down his instrument one-by-one, took a deep bow, and walked off the stage. It was a strip-down of the energy built up over the course of the last couple hours, but Parcels’ tunes refused to leave my head long after we were left only with Anatole “Toto” Serret and his dangling earrings swinging to the rhythm of his lone drum.