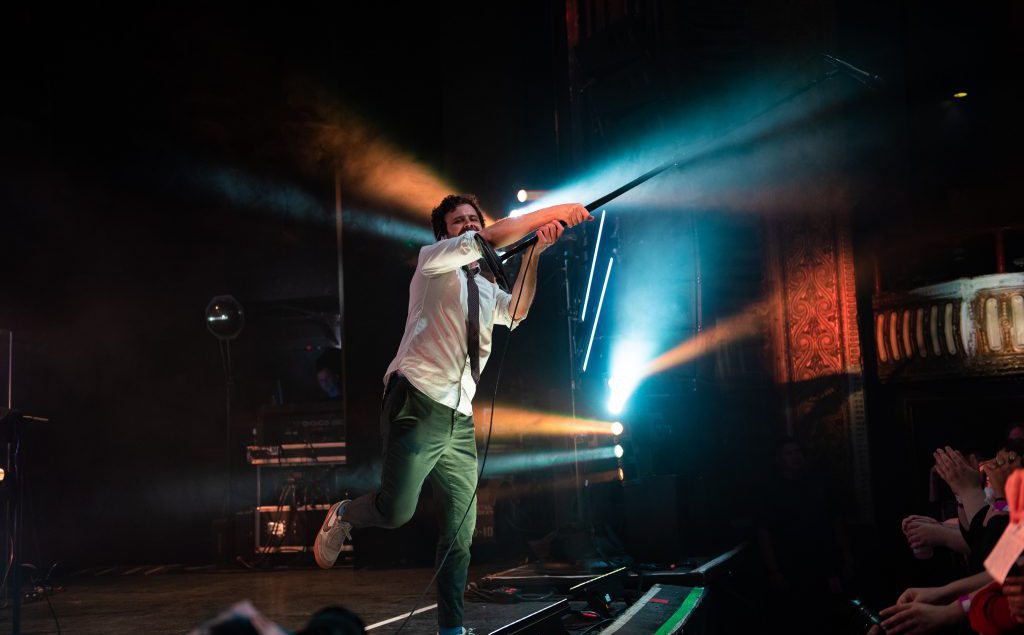 As someone who claims to know a lot about music, I’m honestly pretty uninformed. When an artist or band comes up in conversation that I’m vaguely familiar with, I tend to interject with something along the lines of “oh my god I love them so much, what did you think of their last album???” And I, despite only listening to the chorus of their smash hit from 10 years ago, will concoct some deep theory about how their older music is an outstanding metaphor for the creation of space and time and has the answers to the greatest questions surrounding humanity, but their newer stuff sucks.

Passion Pit is one of those bands for me. I’ve never listened to an album from them, and know a grand total of 2 songs, but I jumped at the opportunity to go to a show on the 10th-anniversary tour for their debut album, Manners. I mean why not? Passion Pit is one of my favorite bands of the last decade!

As I walked into the spacious and far-reaching concourse of the hallowed Riviera Theatre, the smoke from the near-capacity crowd’s weed pens filled the air. I knew the type of crowd I would encounter from the moment I saw the Goose Island bar near the entranceway. Dad hats, sleek glasses, and collared shirts were plentiful; it was as if today’s Mac DeMarco fans aged ten years. With IPA’s in hand, they were ready to jam out to the indie-electronic sounds that captured their ears a decade ago. They were not, however, ready for what was to come from the opener.

As drummer Eliza Enman-McDaniel came onstage and started banging on her kit as hard as she could, I knew exactly what we were in for. The Beaches, an all-woman alternative rock band hailing from Toronto, delivered head-banging, hard-hitting rock tunes that shook you right down to your core. They brought back recollections of the big hair, bigger attitudes era of rock, as they jammed out on their guitars and whipped their flowing manes to the tune of the thrashing sounds. However, considering the type of music that this crowd was expecting from the headliner, their aggressive style largely fell on deaf ears.

The band expected the laid-back crowd to match their high energy, an effort that was for the most part unsuccessful. They didn’t seem to care though, as they continued to dominate the stage with a presence ill-fitting of an opener. It felt as if they had been in the game for years, yet their youthful energy definitely shone through. When keyboarder Leandra Earl revealed that they hadn’t slept in two days, it was hard to believe. They showed up ready to dispel the myth that a group of four women from Canada couldn’t rock, and made a fan out of me in the process.

When lead singer Jordan Miller led her band offstage at the end of their set, the crowd knew who was next. They became increasingly anxious over the 30-minute set change, and the anticipation overflowed as each song playing over the speakers came to an end. After what felt like an eternity, the lights dimmed and touring members Chris Hartz, Aaron Folb, and Giuliano Pizzulo took their positions amidst the screams of the yearning fans. Then, on came the reason why hundreds of Chicagoans packed into the pit of the Riv, the brains behind the music: a guy dressed like an accountant who just finished a long day at the office. Michael Angelakos, the founder and sole member of Passion Pit, walked to the front of the stage, dressed in a plain white button down, maroon tie, and dark slacks, and took a second to admire the forest of outstretched arms. It was as if he was absorbing the energy pulsating from the elated spectators. And then it was go-time. 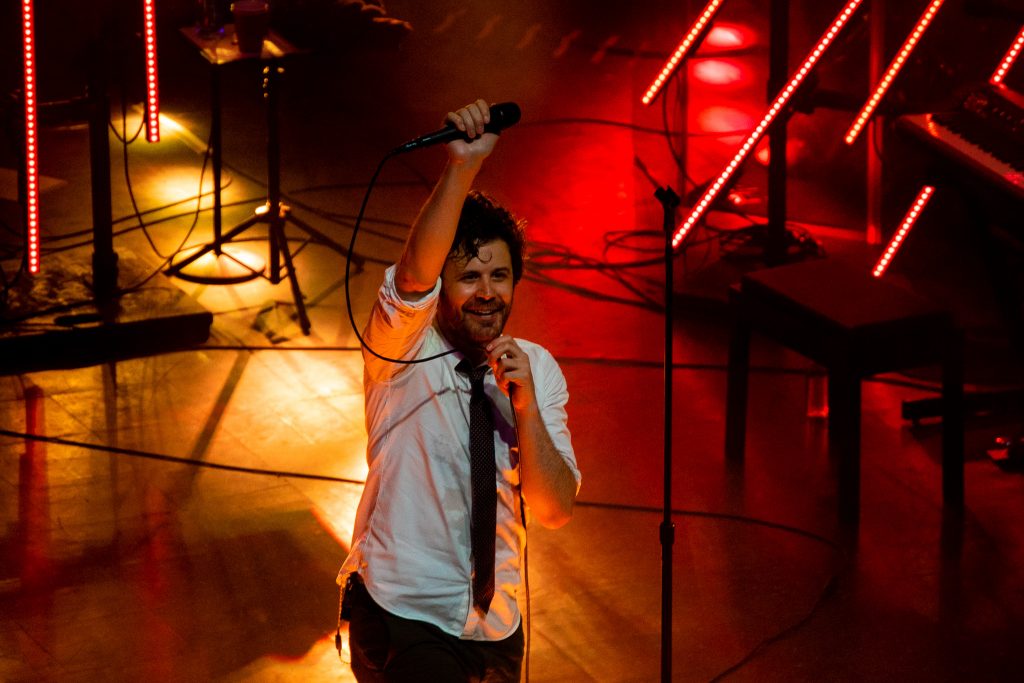 As the band played the opening notes of “Make Light,” Angelakos started running around the stage, looking like a young boy hopped up on Pixie Stix for the first time. The stage was his playground, and he used it as such. He climbed on and stormed off the various platforms littering the stage, almost like he was throwing a temper tantrum. Instead of screaming about a broken Power Ranger, he belted out his lyrics with intense passion. He began the show at a full 10, a level that may have only increased as next was hit song and fan favorite “Little Secrets.” By this point, the crowd that refused to mosh to the head-banging notes of the opener was fully awake and ready to dance as they sang along to every word. It also became apparent to me that the high-pitched crooning which Angelakos was known for was not the work of a studio technician. He opened his mouth wide and serenaded the crowd with such fervor that it is a miracle he didn’t strain his vocal cords. Even for songs such as “Moth’s Wings” or “Eyes as Candles” where he resigned himself to a mic stand or a piano, he still sang with intense emotion, looking at times as if he was going to break down in front of the audience, which was still hooked on every word. He made sure to let us know how appreciative he was of our avidity, ending his fourth track “The Reeling” with an “I love you guys.”

After “To Kingdom Come,” an abrupt record scratch sent the crowd into an absolute frenzy. It was time for “Sleepyhead,” by far the most popular song from Manners, and the volcano of energy and vivacity that had been building up over the past 8 songs completely erupted. Angelakos pranced around the stage and stood atop a platform at its center, microphone in hand, as he screamed the words of the first verse with his fans. As the first “sleepyheeeeeaaaadddd” came to an end and the chorus breakdown began, he leapt off the surface and proceeded to dance along with the crowd. In front of them was the man whose effervescent tunes sparked impromptu dance parties for an entire generation of confused adolescents when they shuffled through their iPods, and now these same souls were mere feet away from that source of exuberance. As a spectator, it was a sight to behold, and easily the highlight of the night. 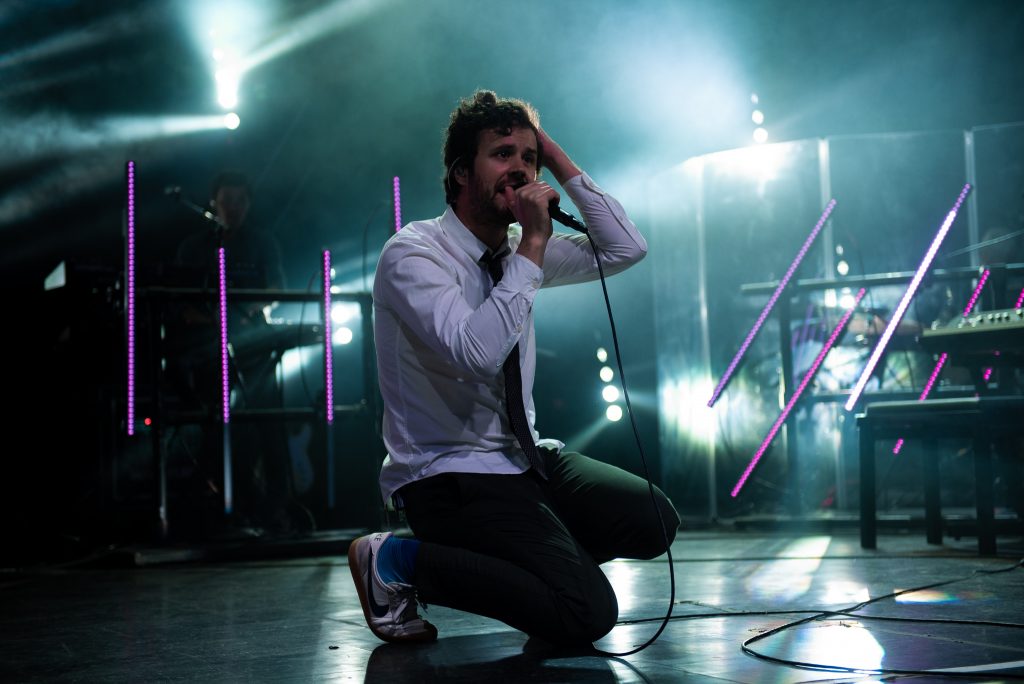 The show could’ve ended there and everyone would have said they got their money’s worth, as evidenced by the ovation Angelakos received once his breakout track commenced. The audience took the time to show its gratitude to the man who made them feel like carefree teenagers again, and all he could do was bask in the limelight, humbled by the rapturous sound of applause. After playing one more song, he stopped the show and told the audience that this idea was “kind of thrown together at the last minute” and that he didn’t think he would be back on tour, let alone to Chicago. He revealed that the last year and a half or so had been pretty rough for him, but being back on stage, in front of this Riviera crowd, made him the happiest he had been in a while. That night marked 10 years to the day that Manners was released, and he said that this tour was his first time playing some of its content since 2009. It was obvious that standing before us was the Passion Pit before the hassles of fame and the contemptuous music industry wore him down. This was Michael Angelakos, a college student who wrote and recorded songs on his laptop as a Valentine’s Day gift to his girlfriend. This was the guy who self-produced his first EP and handed out copies to strangers on the street. It was on this night that I felt that Passion Pit had been reborn, and an entire world of artistic freedom and discovery awaited.