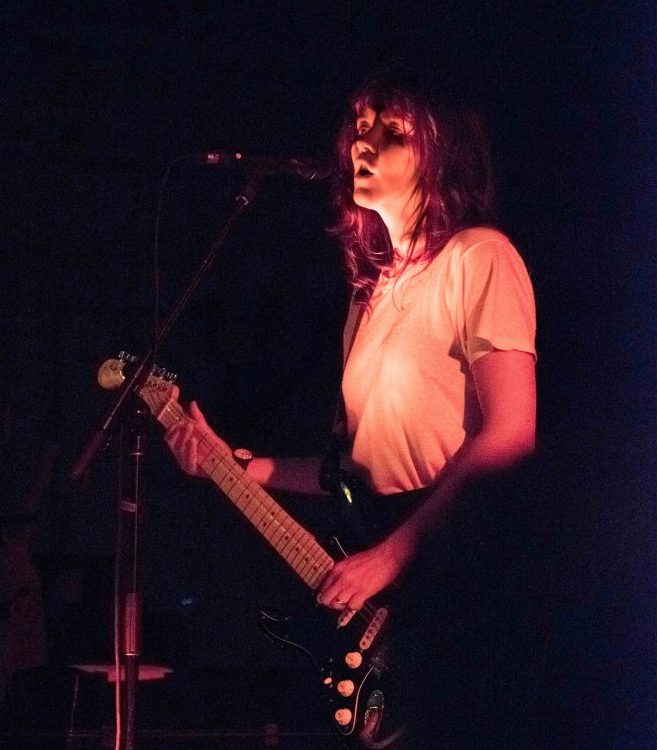 As the weekend of July 20th approaches, here’s who WNUR is excited to see at this year’s #P4Kfest. Look out for more preview coverage over the next few weeks and festival coverage in late July!

Saba is just one of many Chicago-born-and-raised artists to be featured at the festival. After releasing several mixtapes, Saba made his debut with 2016’s Bucket List Project and collaborated with Chance the Rapper on “Angels” in homage to Chicago. On 2018’s Care For Me released in April, Chance returned the favor by featuring on standout track “LOGOUT.”
Listen if you like: Chance the Rapper, Mick Jenkins, Noname
Fav tracks: “HEAVEN ALL AROUND ME,” “Photosynthesis,” “LIFE”

Even if she hasn’t been singing on them, it’s likely that some of your favorite R&B tracks were produced by Syd. Starting out as an audio engineer, she was apart of Odd Future until 2016, then becoming the frontwoman of supergroup The Internet with former Odd Future bandmate Matt Martians. Although she is often collaborating with Tyler, The Creator, Daniel Caesar, and Steve Lacy, Syd put out a solo album in 2017, Fin. Up next for Syd is the release of The Internet’s highly anticipated comeback album, Hive Mind, on July 20th – the very day she is set to perform at Pitchfork Fest.
Listen if you like: Odd Future, Steve Lacy, Daniel Caesar
Fav tracks: “Body,” “Dollar Bills,” “Come Over” (The Internet)

One of the scene’s most elusive rappers, Earl Sweatshirt is making his return to the stage at Pitchfork Fest after canceling most of his recent European tour due to his battle with anxiety and depression. Like Syd, Earl was also a member of Odd Future and has since collaborated with the likes of Frank Ocean, Flying Lotus, Tyler, The Creator, and Vince Staples. With his last studio release being 2015’s I Don’t Like Shit, I Don’t Go Outside, rumors have been swirling for a while now about a possible new album in the works. His set at Pitchfork should prove to be quite telling on that front.
Listen if you like: Kevin Abstract, Frank Ocean, Vince Staples
Fav tracks: “Sunday,” “Wool,” “Sasquatch”

Alt-rock darling and Pitchfork favorite Courtney Barnett is making a stop at Pitchfork Fest after touring her new album, Tell Me How You Really Feel, for the past few months. (We were fortunate enough to review her Chicago show in May, check that out here). Before her latest solo album, Barnett worked with Kurt Vile on a collaborative record, Lotta Sea Lice, released in 2017. The straight-to-the-point crooner is set to be a crowd pleaser at this year’s fest.
Listen if you like: Kurt Vile, Snail Mail, Angel Olsen
Fav tracks: “Over Everything” (with Kurt Vile), “Pedestrian at Best,” “I’m Not Your Mother, I’m Not Your Bitch”

Known for their lo-fi beats and unique instrumentals, British duo Mount Kimbie came to be known from 2010’s debut Crooks & Lovers. 2013’s Cold Spring Fault Less Youth saw collaboration with King Krule, and their most recent release, Love What Survives, features King Krule as well as James Blake on select tracks. Their chill vibe might prove perfect for laying on the grass and taking a breather from the fest.
Listen if you like: King Krule, James Blake, Bibio
Fav tracks: “William,” “You Took Your Time” (ft. King Krule), “We Go Home Together” (ft. James Blake)

Psych-rock legends Tame Impala are set to be headlining Pitchfork Fest’s Friday lineup. Amid a hiatus in 2017 and rumors of the band’s disintegration, Pitchfork will be Tame’s first show in the U.S. since last summer’s Panorama Festival. Although their latest album, Currents, came out in 2015, the band’s members have been keeping busy on side projects and released a collaborative single with ZHU titled “My Life” in March.
Listen if you like: Beach Fossils, Unknown Mortal Orchestra, Pond
Fav tracks: “Yes I’m Changing,” “New Person, Same Old Mistakes,” “Mind Mischief”

Another hometown artist, Paul Cherry’s bedroom-pop aesthetic is all the rage right now. On his first full-length work, Flavour, released in March, Cherry has seemingly become more experimental with his sound. Tracks like “Like Yesterday” and “This High” include jazz and pop influences while still sticking somewhat to his quirky roots. Cherry also appears to enjoy commentating on the struggles of everyday millennial life dealing with social media and relationships, which is portrayed perhaps most prominently in the final track of Flavour, “Cherry Emoji.”
Listen if you like: Triathalon, Clairo, Mac Demarco
Fav tracks: “Hey Girl,” “Like Yesterday,” “Cherry Time”

Although he only has one self-titled EP under his belt, Berhana has made a name for himself via his infectiously sweet voice and style. The LA-based artist recently released his own rendition of Wreckless Eric’s 1977 hit, “Whole Wide World,” giving it his own twist with slow, simple piano and delightful backing vocals. With several festival dates on the radar for him this summer, including Pitchfork, Berhana is definitely one to watch.
Listen if you like: Yellow Days, Mac Ayres, Masego
Fav tracks: “Janet,” “Grey Luh,” “Brooklyn Drugs”

With an incredibly powerful voice and an even stronger sense of lyricism, Moses Sumney has all the makings of an up-and-coming R&B superstar. 2017’s Aromanticism has some insanely beautiful songwriting, and his newest single “Make Out in My Car” has been remixed by James Blake and Sufjan Stevens. Proving to be perfect for both emotional nights and sunny summer days, Sumney’s set is guaranteed to be breathtaking.
Listen if you like: Kevin Morby, Sufjan Stevens, serpentwithfeet
Fav tracks: “Don’t Bother Calling,” “Plastic,” “Make Out in My Car”

Punk duo Girlpool is known for their soft garage-rock sound, honest lyrics, and often raw vulnerability. Reminiscent of 90s femme rockers such as Letters to Cleo, Girlpool has two LPs already under their belt since forming in 2013. They returned in February of this year with single “Picturesong,” a collaboration with Dev Hynes (Blood Orange), a seemingly unlikely combination possibly signalling a forthcoming change in sound.
Listen if you like: Frankie Cosmos, IAN SWEET, Adult Mom
Fav tracks: “Chinatown,” “Blah Blah Blah,” “Picturesong”

Singer, writer, and producer extraordinaire Dev Hynes has collaborated with A$AP Rocky, Haim, Solange, and Willow Smith among others. His own solo project, Blood Orange, has seen success with its 80s electro-pop flair and political commentary. A set of two singles titled Black History released in February has been Blood Orange’s most recent solo endeavor since 2016’s Freetown Sound. Also an accomplished dancer, this set is guaranteed to be a full-out performance.
Listen if you like: Toro y Moi, Perfume Genius, TOPS
Fav tracks: “Christopher & 6th,” “Instantly Blank (The Goodness),” “You’re Not Good Enough”

The War on Drugs

Dad-rock favorites The War on Drugs, formed in the early 2000s by Kurt Vile and Adam Granduciel, deliver consistently soft yet hard-hitting rock ballads. After Vile left the band in 2008 to pursue his solo career, Granduciel took over, releasing the critically acclaimed album Lost In The Dream in 2014. With their latest release, 2017’s A Deeper Understanding, The War on Drugs have continued to reign supreme amongst music fans.
Listen if you like: Dawes, Band of Horses, Deerhunter
Fav tracks: “Pain,” “Red Eyes,” “Thinking Of A Place”

Folk-rock champions Fleet Foxes are the headliners for Saturday’s lineup. Earning popularity and critical acclaim alike with their debut self-titled album in 2008, Fleet Foxes have since released two more albums, the most recent being 2017’s Crack-Up. Known for soothing vocals and harmonious instrumentals, their set should prove to be a calm end to Saturday’s madness.
Listen if you like: Iron & Wine, The Shins, Alt-J
Fav tracks: “Oliver James,” “Crack-Up,” “Lorelai”

Evanston’s own Kweku Collins has been a part of the Chicago music scene since 2015, producing music in high school and now having released an EP and two LPs – Nat Love and Grey – in the past three years. The singer and rapper seems to be a favorite of Pitchfork, having earned a rating of 8 on Nat Love and Best New Track for “Stupid Rose,” so it only makes sense that he’ll be playing their festival.
Listen if you like: Topaz Jones, Duckwrth, Jalen Santoy
Fav tracks: “The Continuation,” “Death of a Salesman,” “Love It All”

An alumnae of the Chicago High School for the Arts, 19-year-old Ravyn Lenae also started making music in high school. In 2017, she released EP Midnight Moonlight and featured on tracks with Noname, Mick Jenkins, Saba, and Smino. Collaborating with Steve Lacy, she put out EP Crush in February of this year and even stopped by Northwestern to preview it (check out the Daily Northwestern’s coverage of it here).
Listen if you like: Steve Lacy, Kali Uchis, Jamila Woods
Fav tracks: “4 Leaf Clover,” “Computer Luv,” “Free Room”

Japanese Breakfast, aka Michelle Zauner, provides a mix of lo-fi beats and indie pop accompanied by her sugary-sweet voice. 2016’s Psychopomp put her on the map, shortly followed by 2017’s Soft Sounds from Another Planet. Zauner’s songwriting touches on themes of heartbreak, death, and celebrities, resulting in high levels of young-adult relatability.
Listen if you like: Alvvays, Car Seat Headrest, Soccer Mommy
Fav tracks: “Till Death,” “Road Head,” “Everybody Wants to Love You”

Chicago-born R&B powerhouse Noname got her start performing slam poetry and made it big after featuring on Chance the Rapper’s “Lost” in 2013. Her one and only release, 2016’s Telefone, features fellow Chicagoan colleagues and Pitchfork festival performers Saba, Smino, and Ravyn Lenae. With it being two years since Telefone, Noname has been hinting at new album Room 25 on Twitter, but no release date has been given yet.
Listen if you like: Saba, NxWorries, Goldlink
Fav tracks: “Sunny Duet,” “Diddy Bop,” “Shadow Man”

Alex G, or Alex Giannascoli, already has an extensive discography, having released five albums within four years. His brooding,“sadboy” sound gained him a loyal fan base, and his undeniable guitar talent resulted in him playing on a few tracks off of Frank Ocean’s Blond. His latest work, Rocket, was released in 2017 via Domino Records.
Listen if you like: Spencer Radcliffe, Florist, Starry Cat
Fav tracks: “Mary,” “Sandy (Bonus Track),” “Forever”

Seasoned garage rockers Japandroids returned in 2017 after a five year hiatus with eight-track album Near To The Wild Heart Of Life. Beforehand, they released three full-length LPs between 2009 and 2012. Known for their rowdy, DIY approach to live shows, Pitchfork fest is just one of many stops for Japandroids on their tour of the new album.
Listen if you like: Cloud Nothings, Wolf Parade, The Walkmen
Fav tracks: “The House That Heaven Built,” “Press Corps,” “Younger Us”

Queen of Soul Ms. Lauryn Hill is set to headline Sunday’s lineup at Pitchfork fest. Although it is her only LP, 1998’s The Miseducation of Lauryn Hill proved to be a smash success. Nominated for 11 Grammys and taking home five, the album soon became a classic. Hill has not put out any solo music apart from a MTV Unplugged live album in 2002, but listeners may recognize her song “Ex-Factor” as the sample on Drake’s hit single, “Nice For What.”
Listen if you like: Aaliyah, Brandy, Mary J. Blige
Fav tracks: “Superstar,” “Ex-Factor,” “Doo Wop (That Thing)”