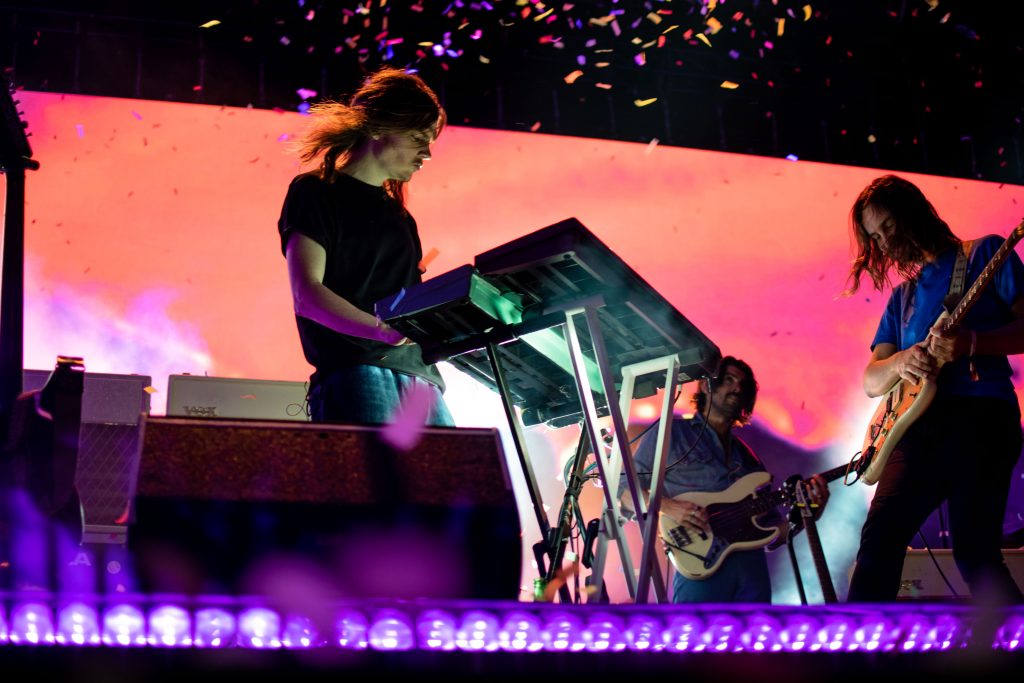 Our first set of the day was Tierra Whack, the rapper that Pitchfork booked after Earl Sweatshirt canceled on Monday. Whack was accompanied by her DJ, Zach, who warmed up the crowd by playing hits such as “Crazy” by Gnarls Barkley and “Feel Good Inc” by the Gorillaz. After about 15 minutes, Whack came on stage, bursting with energy. Sporting a denim bucket hat and denim dress, she led the crowd in several call and response chants, including “Crack kills if it don’t get you Whack will” before playing “Toe Jam.” Her signature super fast flow was definitely impressive, but her efforts to get the crowd moving didn’t seem to be working. After playing “Pet Cemetery” off of her newest project Whack World to little response, she asked the crowd “Alright y’all, what do you wanna hear?” A group of people yelled back “Fruit Salad,” and Whack obeyed. Luckily, this helped to boost the crowd’s energy for the remainder of the set. [slideshow_deploy id=’3367′]

From the Westside of Chicago, Saba was greeted by an enthusiastic crowd (a “Saba” chant even broke out before he came on stage). Wearing his own merch and Adidas track pants, Saba flashed his charming smile and announced that this was “going to be a special show.” Saba opened with the first track on his new album Care For Me, “BUSY/SIRENS,” and the crowd sang along to the chorus. He then told the audience that this was his first time playing in Chicago this year, explaining why the show was so special. After playing a few more tracks off of Care For Me (“BROKEN GIRLS,” “CALLIGRAPHY,” “FIGHTER,” “SMILE”) he switched to his 2016 album Bucket List Project. “Stoney” was the highlight of the set, with Saba’s energy on stage being matched by the crowd. Towards the end of the set, he also made a tribute to his cousin and fellow member of Pivot Gang, John Walt, who was fatally stabbed last February. He ended the set with “LIFE,” which got the crowd jumping and yelling for more – resulting in him playing one more song to appease them. [slideshow_deploy id=’3371′]

“Today is all about Chicago and all about The Internet,” Syd said as she came on stage, winning lots of applause from the crowd. Although she has her own solo music, Syd is also a part of the band The Internet alongside Steve Lacy, Matt Martians, Christopher Smith and Patrick Paige II, whose album Hive Mind came out yesterday. However, at the start of her set Syd focused on her latest album, 2017’s Fin. She dedicated “Got Her Own” to “all the independent women out there,” and crooned her way through “Bad Dream/ No Looking Back.” Her performance was simple and effortless, and she even sat down on stage at one point to sing “Shake Em Off.” She then focused more on her collaborative projects, which was something I was not expecting but was grateful for. She played her hit song with Kaytranada, “YOU’RE THE ONE,” and even sang a little bit of “Take Me Away,” her feature on Daniel Caesar’s album Freudian. But this was not the biggest surprise that Syd had in store – after singing “Come Over” off of the newest The Internet record, Steve Lacy came out on stage to perform “La Di Da” and “Roll (Burbank Funk),” during which the rest of The Internet joined them. It was an extremely exciting end to an already impressive set, making it one of my favorites of the day. [slideshow_deploy id=’3360′]

Mount Kimbie performed at the blue stage, which felt like a whole different world compared to the crowds at red and green. The people waiting to see Mount Kimbie were a little bit older and more serious looking than those I had seen at Syd or Saba. You could tell they were purely there for the music. Mount Kimbie had an extremely impressive set, their ambient beats casting a spell over the crowd that resulted in a lot of head bobbing and trance-like dancing. The highlight of the set was “You Look Certain (I’m Not So Sure),” which was one of the few songs they played that involved vocals. The rest kind of all blended together, but in the best way. Their set definitely provided a much needed break from the crazy crowd that seemed to be the norm earlier in the day.[slideshow_deploy id=’3355′]

Speaking of a crazy crowd, pretty much everyone who was at the festival gathered shoulder to shoulder to see Tame Impala – and it was definitely a show. Tame Impala’s usual trippy visuals were heightened with lasers and strobe lights, and the band themselves played on a platform on the stage. They opened with “Let It Happen,” and an insane amount of confetti was released during the drop. However, after the excitement of that died down, some of the crowd began to get upset because the band’s equipment was pretty quiet. This sparked a “Turn it up!” chant that echoed throughout the crowd, but alas nothing was changed. As misty rain began to fall, they played “Mind Mischief,” “Elephant,” “Yes I’m Changing,” “Why Won’t You Make Up Your Mind?” and “Eventually.” During this, I witnessed a fight, a person wearing a panda costume crowd surfing, and an adorable 6-year-old boy sitting on his Cool Dad’s shoulders. Although all seemed right again when Tame played “The Less I Know The Better,” I couldn’t help but feel a little disconnected from the band itself. They didn’t stray far from their recordings, and the extra platform on stage and poor sound quality didn’t help.[slideshow_deploy id=’3346′]