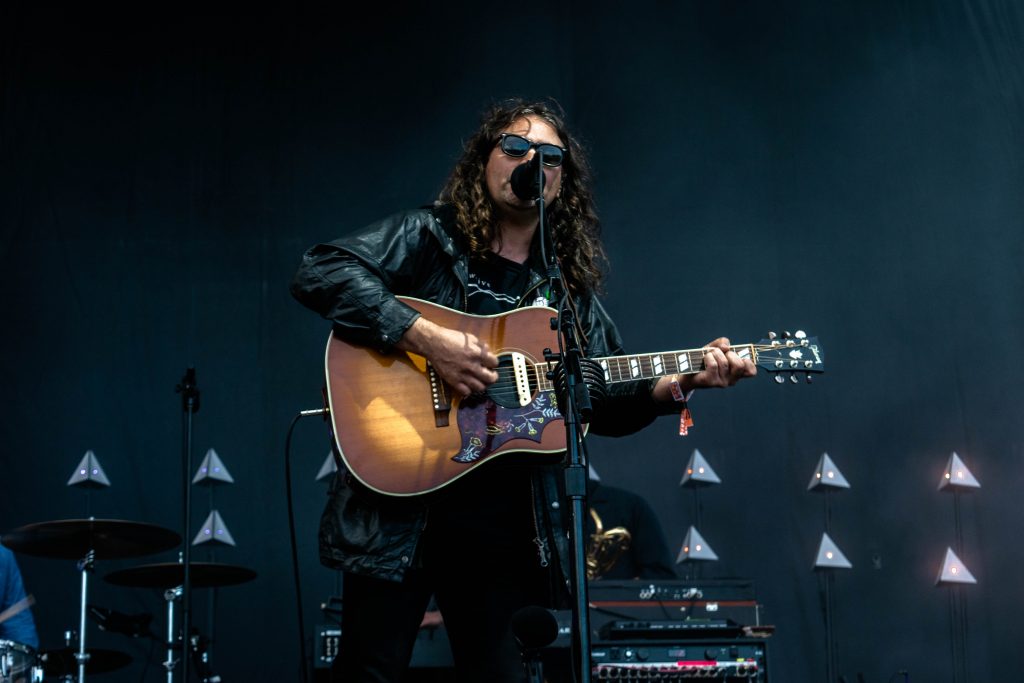 Chicago native Paul Cherry opened the second day of the festival. His yacht rock dream pop fusion of a sound provided good vibes and had the crowd swaying in agreement upon the first song, “Hello Again.” While Cherry played guitar, his extremely talented band backed him up on drums, bass, and keys. His set consisted of every song off of new album Flavour, except for an impromptu cover of John Martyn’s “Couldn’t Love You More.” Cherry’s excitement to be performing at Pitchfork was clear, and the crowd reciprocated his enthusiasm by jamming out, even to instrumental track “Cherry Emoji.” WNUR also got the chance to interview Cherry after his set – check that out here! [slideshow_deploy id=’3381′]

As soon as he walked on stage, Berhana’s raw talent was undeniable. Opening up the set with the groovy “Janet,” the crowd began moving and singing along immediately. His voice was incredibly smooth, running over intricate riffs with unbelievable ease. His DJ backed him up, playing intriguing samples before tracks and turning the bass up so high that you could feel it in your throat. With an infectious smile in between every song, Berhana played his cover of “Whole Wide World,” “Brooklyn Drugs,” and “80s,” intermixed with a few new songs including the just released “Wildin’.” He claimed he wanted to try out these new songs on the audience, and asked for everyone to put their “phones away for a second and just listen.” Berhana closed the set with his most popular song “Grey Luh,” sending everyone away with a smile and sense of relaxation. [slideshow_deploy id=’3388′]

London-based rocker Nilüfer Yanya started her set alone except for her mint green guitar, and was then met with her band – a saxophonist (doubling as keys) , keyboardist (doubling as bass), and drummer. Her rich Alanis Morissette-esque vocals complimented the jazz rock instrumentals nicely, providing soft jams and slow builds. Yanya played all of the tracks she has out, along with a few new songs (“Angels” and “Heavyweight Champion of the Year”) and a Pixies cover. Although her sound was intriguing, it did grow a bit repetitive over the course of the set – but for someone just starting out in the U.S., Yanya is well on her way to becoming an indie-rock darling. [slideshow_deploy id=’3395′]

Grunge-rock duo Cleo Tucker and Harmony Tividad took over the Blue Stage Saturday afternoon along with touring members Ross Wallace-Chait and Kevin Boog. As I listened to other audience member’s conversations, it seemed that the biggest topic in discussion was singer and guitar player Tucker’s current transition from female to male. Specifically, the group of girls next to me were wondering how Tucker’s voice change would alter their sound, once notable for the high-pitched harmonies between Tucker and Tividad. However, as they played through their set, it became apparent that Girlpool had not lost, but gained something. Tucker’s now octave-lower voice added a more rounded sound to their slow-building discography, introducing new harmonies and a pleasant rasp. More than anything, it was clear how much passion both Tucker and Tividad still had for their music, playing through “It Gets More Blue,” “123,” and “I Like That You Can See It,” “Ideal World,” and “Your Heart” as if it meant the world to them.[slideshow_deploy id=’3402′]

As soon as Blood Orange’s Dev Hynes stepped out in a Kangol driving cap and tiny glasses, it was apparent this performance was going to be old school. As vintage-looking footage of cars, an old interview with Outkast, and 90s music videos played on the screen behind him, Hynes proved that he is indeed a talent to behold. Switching from playing keys to guitar and back to keys, Hynes dove into his discography with the voice of a 70s crooner, à la The Commodores or early Prince. Highlights of his set included “Desirée,” “Best to You,” “You’re Not Good Enough,” and “E.V.P.” He also played a few tracks off of his forthcoming album that was just announced to be released on August 25th. However, the real star of Blood Orange’s show was his band – his two back up singers stunned with chill-inducing voices, and his saxophonist, drummer and bassist provided intricate funk-driven instrumentals. In addition, everyone on stage seemed to be having so much fun and bouncing off of each other’s energy. At one point, Hynes even broke out into dance, making the crowd – and his band – go wild. It was truly a feel-good set for everyone involved.[slideshow_deploy id=’3409′]

The War On Drugs

Seasoned rockers The War On Drugs seemed to bring everyone together. Teenage girls were in the crowd amongst married couples, 50-year-old men, and boys in their 20s. Frontman Adam Granduciel delivered his signature rasp and complicated guitar riffs in a leather jacket and Slowdive t-shirt, while the rest of his band followed along in perfect time. As they played through hits such as “Pain,” “Strangest Thing,” and “Brothers,” a combination of happy dancing and air guitar took over the crowd. Although not all of their lyrics can be described as joyous, The War On Drugs’ music seemed to put a look of peace and contentment on the faces all around me. The last third of their set was the highlight, playing “Red Eyes,” “Under the Pressure,” and “Burning” back to back. The combination of those three builds was enough to leave anyone in awe.[slideshow_deploy id=’3416′]