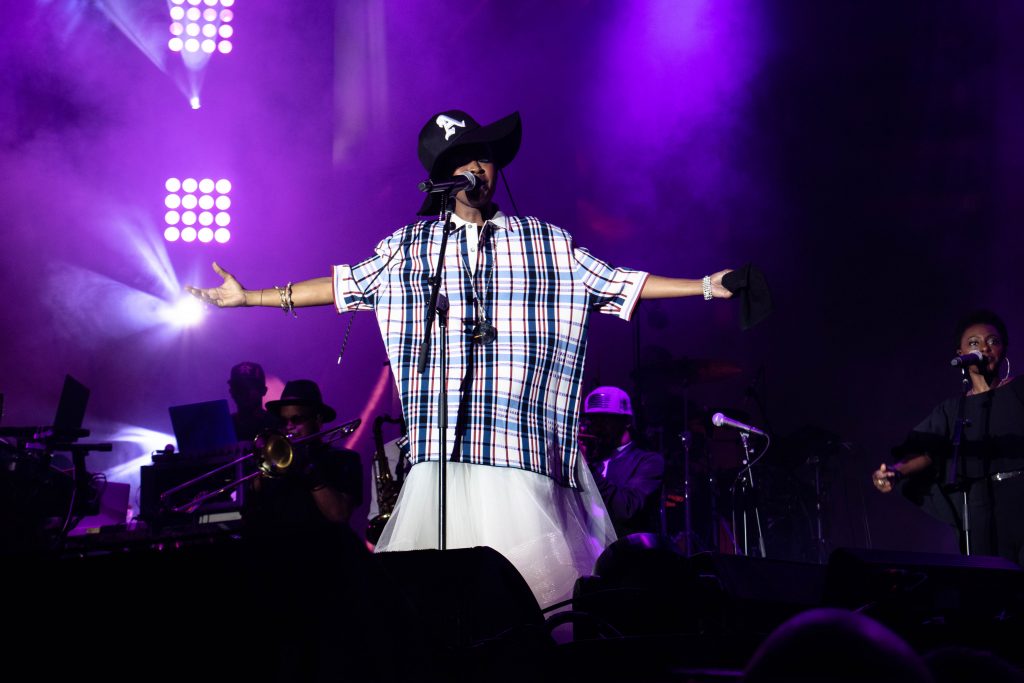 When it came time for her set, Michelle Zauner of Japanese Breakfast practically jumped her way on stage. Her undeniable energy was also exhibited in her outfit, consisting of a long-sleeved racing top, sparkly skirt, and space-buns hairstyle. Originating from Philadelphia, Zauner showcased her multi-instrumentalist abilities by switching from guitar to synths to just vocals throughout the show. Backing her up was her band, consisting of a guitarist, bassist, and drummer who provided vocals at times. The set was a good mix of Zauner’s dark, dreamy tracks (“Heft,” “Boyish,” “The Body Is a Blade”) contrasting with her happier, synth-driven songs (“The Woman That Loves You,” “Everybody Wants to Love You,” “Machinist”) that proved perfect for dancing. The band also surprised the audience with a hard-rock cover of “Dreams” by The Cranberries at the end of their set, resulting in an entire-crowd sing along. [slideshow_deploy id=’3435′]

“Chicago! Wassup wassup wassup WASSUP?!” were the first words out of Noname’s mouth as she took her place on the Red stage. Announcing that she was “a little bit high,” Noname first played some new tracks off of her upcoming album, words coming out of her mouth faster than one could comprehend them. However, she soon stopped, saying that she had smoked too much and thus forgot the lyrics. After playing her hit “Diddy Bop” off of 2016’s Telefone, she stopped her set to ask for the photographers to clear out of the photo pit before continuing on with her set, rapping her verses on Smino’s “Amphetamine” and Mick Jenkins’ “Comfortable.” Throughout her set, Noname enjoyed using the audience to enhance her music, having them adlib various “oo’s” and playing some call and response games. For her last two tracks, Noname played “Forever,” during which Ravyn Lenae (who had performed at the fest earlier that day) and Joseph Chilliams came out. This was followed directly with “Shadow Man,” during which Saba and Smino (both performers at the fest as well) contributed their verses. Despite some hiccups, with Noname’s guest appearances and conversational demeanor, her performance had the crowd swelling with Chicago pride. [slideshow_deploy id=’3442′]

(Sandy) Alex G and his band members walked on the Blue stage to the tune of Tom Cochrane’s “Life Is A Highway,” giving their set an ironic start. However, it soon got serious as singer Alex Giannascoli led the band’s moody instrumentals with his soft, melancholy vocals. After playing through “Forever,” “Proud,” and “Bobby,” which the crowd chanted and swayed along to accordingly, Giannascoli welcomed Michelle Zauner of Japanese Breakfast on stage to sing “Brite Boy” with him. Harder songs such as “Brick” and “Horse,” played toward the end of their set, started a mosh pit in the middle of the crowd, but by “Sportstar,” the audience’s eyes were once again glued to the stage, bodies swaying along. After the last chords of “County” rang out, the crowd immediately demanded “One more song!” most likely because the band never played their most popular track, “Mary.” This was enough to get Giannascoli back on stage, but only to scream “HEY, SHUT UP! WE CAN’T DO ONE MORE SONG!” before mumbling a meek “Thank you” and exiting for good. [slideshow_deploy id=’3449′]

Although Japandroids are only two men strong – Brian King on guitar and vocals and David Prowse on drums – they built a wall of sound during their set at the Blue stage. Opening with “Near To The Wild Heart Of Life” off of their 2017 album of the same name, the crowd began moshing and singing along immediately. King’s speak-singing and Prowse’s insane drumming skills made for the perfect environment for this. After playing straight through “International” and “Heart Sweats,” King announced that “The boys are back in fucking town!” and then dedicated “Younger Us” to their original Chicago fans. Basically every song in their set was melded together with seamless transitions and formidable breakdowns and builds, making it an exciting listening experience. Naturally, they ended their show with “The House That Heaven Built,” inspiring several crowd surfers and lots of head nodding. [slideshow_deploy id=’3456′]

Stopping at Pitchfork during her 20th anniversary tour of The Miseducation of Lauryn Hill, Ms. Lauryn Hill made sure that everyone was aware of her star power. Dressed in a wedding gown with a collared shirt over top and asymmetrical makeup, Hill sang through every song on the album, even though it meant going nearly 30 minutes over when her set was supposed to end. Her band consisted of a brass section, guitarist, bassist, drummer, two keyboardists, a hype man, and three backup singers with matching outfits down to their shoes. Perhaps the climax of her set was “Forgive Them Father,” during which videos of police brutality played on the monitor and Hill broke down crying. Also notable was when the cameras flashed to Chance the Rapper singing his heart out during “Nothing Even Matters,” drawing a large response from the crowd. Although Hill appeared to be having issues with her mic stand as well as her band – she kept on pointing to certain members and requesting that things be turned down or adjusted – nothing could stop her set from being as meaningful as it was. Before playing her hit “Doo Wop (That Thing),” Hill made a speech about the album: “There was a tremendous amount of resistance when I made this album… [but] I felt a responsibility to soldier through the adversity to speak for my generation… God and the universe blessed this endeavor and blessed people through this music. It was so huge that I had to step back from it… I just wanna thank you. Thank you for sharing this moment with us. If this album touched your souls, it’s because the universe gifted you this music and just used me as the medium.” Despite the slight technical difficulties, these words from Hill brought her down to earth and made for an awe-inspiring moment. [slideshow_deploy id=’3464′]