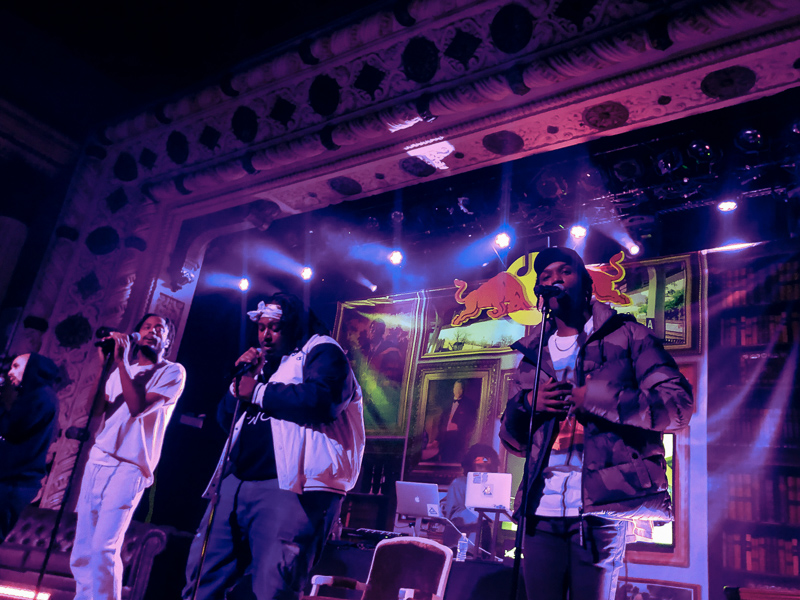 Even though this was the second night of the third annual John Walt Day concert, the line was packed outside with an hour until doors officially opened. The west side Chicago collective Pivot Gang consisting of Saba, Joseph Chilliams, MFnMelo, Frsh Waters, Squeak PIVOT and Dae Dae Pivot came together to throw the annual benefit concert in honor of Walter Long Jr.’s passing aka John Walt in 2017. All proceeds from both nights — a part of the Red Bull Music Festival this year — are going towards the John Walt Foundation to continue on his legacy by supporting inner-city artists and youth. Despite the drizzling rain, fans were buzzing with excitement to see night two as a group of fans started playing SABA’s Care For Me album, screaming his lyrics in line. Once inside, the stage looked like the set of a play adorned with a sick backdrop that looked like bookcases, a beautiful photo of John Walt in the top left, and a literal tv centered in the middle. There was even a pool table on the right side with a carpet in the middle and this deep red leather couch on the left, everything was so carefully constructed.

The anticipation could be felt all around as the sold-out show packed up quickly with fans on the lower level and all along the top balcony overlooking below. At the top, there was a special VIP section for friends and family of Pivot Gang, with a noticeable appearance from the lovely Ravyn Lenae supporting in the section above. After a good while and chants from the crowd yelling “PIVOT,” DJ DAM DAM walked on the stage and the first installment of the story began. The crowd became alive as DAM DAM told the audience we were listening to unreleased John Walt aka DinnerWithJohn. It truly a beautiful way to start off the night as clips of John Walt played on the tv in the back and DAM DAM got the crowd to chant “JOHN WALT” over and over.

After DAM DAM’s set I knew this was going to be an unforgettable experience unlike other shows I’d been to, the energy was surreal and the perfect celebration of Walt’s life. Everything was rolling now as the iconic Kari Faux came out next in this beautiful red dress with a long cape attached. She was accompanied by her absolutely stunning DJ, Huneycut, who was noticeably rocking the Melody Ehsani 1’s on her feet. Immediately, Kari Faux had everyone engaged and rocking with her as we were all doing the two-step at one point even though some in the crowd were clearly offbeat, it still was live. My personal faves were her hit from Insecure “No Small Talk,” when she broke out in a dance moment to Gwen Stefani, and the iconic track “LEAVE ME ALONE” to close out the set. Fans of Kari Faux and those who didn’t know her before were all sad to see her exit the stage before Faux hilariously reminded everyone that we had a whole Pivot Gang set we were about to witness.

The air was so tense with anticipation as everyone was definitely warmed up and ready, and before we knew it, there were videos of Pivot Gang with clips of John Walt playing as the lights dimmed. The play was officially about to begin as Dae Dae Pivot dressed in a black tux walked onstage with a book in hand and sat in this grand chair. Dae Dae began to read this crafted narrative in a very comedic narrator nature as it told the story of how Pivot Gang came together, the tragic murder of John Walt, and then how it led to the annual John Walt Day. Shortly after that introduction, the main acts took the stage as SABA walked out first with MFnMelo, Joseph Chilliams, and Frsh Waters following with Squeak Pivot behind the turntables. The collective looked timelessly classic with their matching black tuxes and choreography to their second track, “Colbert” on the You Can’t Sit With Us project. The moves felt reminiscent of an old R&B boy group like New Edition, it was truly a sight to see. After that opening performance, it was like a movie before my eyes as everyone wasn’t sure who was about to step out the door next and what song was to come after. Dae Dae Pivot kept coming back every now and then to introduce us into the next phase of the show, continuing to read from his book which the crowd absolutely loved. After “Colbert,” it was like a personal showcase for each member of Pivot Gang as MfnMelo came out to perform some tracks from his new project Everybody Eats like the catchy track “Flow Seats” which had the crowd bouncing like crazy.

Next, Pivot Gang all came back out with an unreal performance of “Mathematics,” featuring Femdot who came out and rapped back in forth with SABA like it was just the two of them on stage battling. Joseph Chilliams was a personal highlight as he swayed his hips the whole night and shined on Pivot Gang’s track “Blood.” Chilliams had the whole crowd laughing and going crazy during his set with his surprise incredibly talented backup dancers that came out, and then even bringing up two lucky audience members to dance & pose with him. It was so dope how everyone had a moment to shine and then they all came out together again like some superheroes or something. It was a really cool moment to see Frsh Waters take the stage, as you could tell with his electric, passionate energy while he performed unreleased tracks. Frsh Waters has no solo tracks out right now but everyone in the audience was hype like they knew every word and you could tell how much it meant to him on stage. Once SABA came out for his set, it was unreal as all of Pivot Gang was on stage as he performed the track “Sacrifices,” from the grammy-nominated Dreamville album, and then gave an unreal rendition of “LIFE” where he hopped on the pool table and went full Super Saiyan. The night felt perfect and the moment that I had been waiting for all night finally came full circle as the collective performed “Mortal Kombat,” and Kari Faux laid down on the pool table to perform her iconic verse in which everyone yelled when she said “Excuse me? Are you talkin’ to me? ‘Cause my name ain’t (Ayy) and my time ain’t free!” The performance ended with confetti falling down on the crowd, Pivot Gang giving thanks to everyone for coming out, and Frsh Waters’ son taking the mic to get the crowd to yell “PIVOT” one last time.