“Warm earth music for plants… and the people who love them,” stated the underlying theme of the Garfield Park Conservatory’s premiere event “Plantasia.” Plantasia was a night chock-full of dreamy lights and ambient noises in honor of the 1976 Mort Garson album by the same name, Mother Earth’s Plantasia.

Stepping into the lush greenery, which was surprisingly breezy for a greenhouse, I was instantly aroused by the intersection of visual and musical stimuli. Garson’s album was revived by the soft, whimsical noises that seemed to erupt from all directions out of leaves, ferns, and cacti. Floating through the different halls, my eyes darted from an illuminated 38-foot agave tree to the dancing vegetation to the homogenous, tattoo-sleeved millennial crowd. We finally stumbled into the main performance space: Horticulture Hall.

Eight live interpretations of Plantasia unfolded in the vast banquet hall, which was completed with a glittering, mosaic tile fountain, canopied ginger plants, and a surreal, purple glow. Each artist and group had a dedicated blurb in the program on the plants inspiring their performance titles, like “Symphony for a Spider Plant” and “Rhapsody in Green.” Having arrived a bit late due to my distracted wander around the rest of the greenhouse, I caught the last half of Jim Magas and Chandeliers’ “Ode to an African Violet,” an electro-punk, high energy performance that set the tone for the rest of the night.

Diverting my attention to the second stage in front of the mosaic fountain, I found Oui Ennui’s rendition of “Ode to an African Violet” to be reminiscent of video game tunes from your childhood, which gradually built to a rhythmic chanting that enveloped the ears. His shimmery, sequined mask only added to his surreal show. Ben Billington’s fingers danced furiously across his soundboard during “Rhapsody in Green,” filling the room with scratchy, dark noise. Next up was Tony Janas and Andy Ortmann, wearing fuzzy fern costumes akin to Oscar the Grouch fur. The duo swayed slothfully to their clanging, irregular beat, inciting a sense of uneasy curiosity. Finally, Emma Hospelhorn and Sam Wagster took the stage with a trombone and synthesizer, concluding the indoor performances with a buttery, elated interpretation of Plantasia.

Outside on the Bluestone Terrace, Andrew Savage of Parquet Courts performed a dreamy ambient set. Electronic palpitations reverberated through an attentive crowd nestled on blow-up couches. 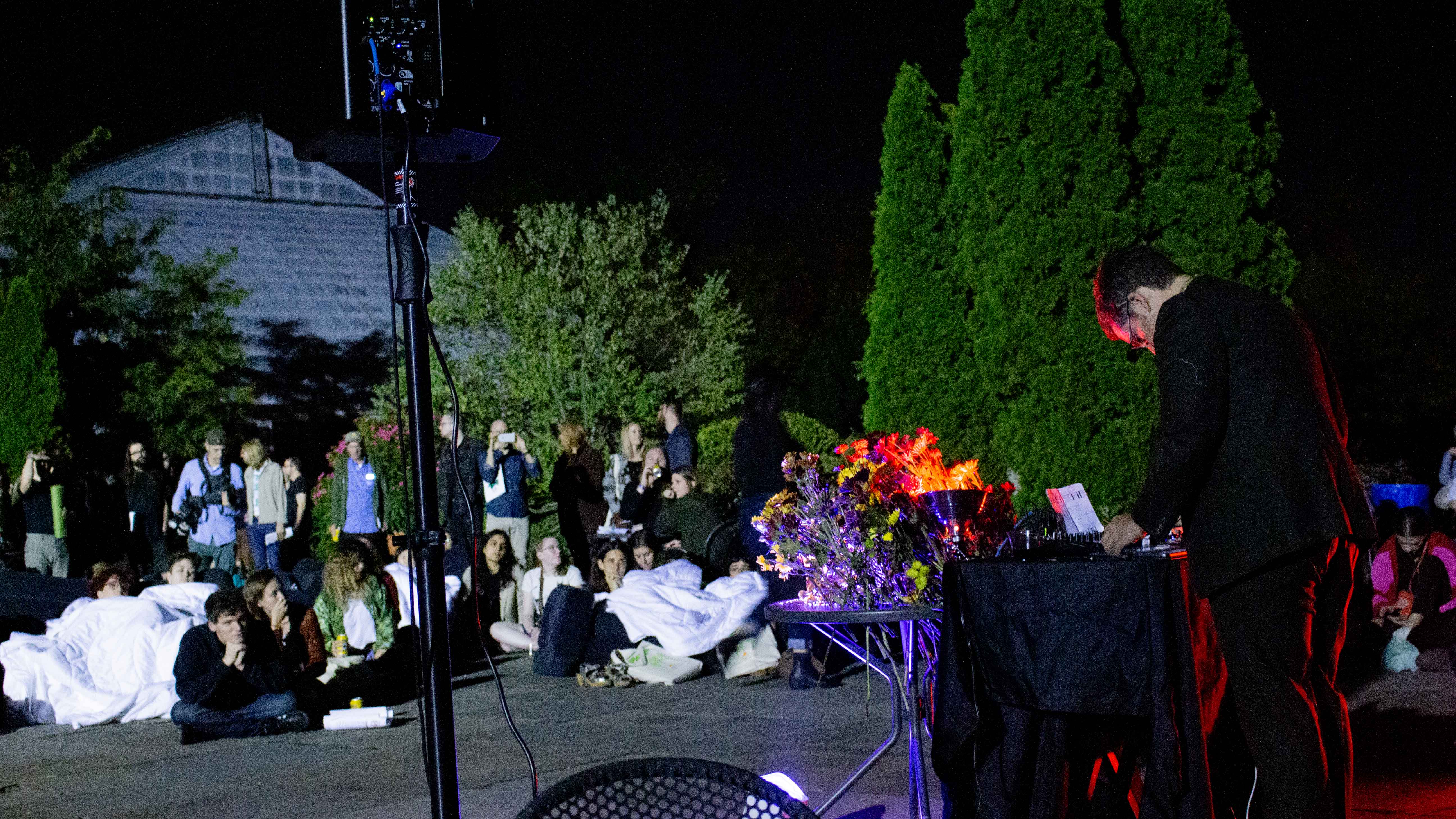 I ended up leaving halfway through Savage’s set, hoping to catch an early train back to Evanston. Hopping on the Green Line train full of individuals tired from the Thursday night, I left the surreal excesses of Plantasia behind me. Unseen to my seat neighbors, I was aglow: an earthly night had unfolded into an unearthly delight.