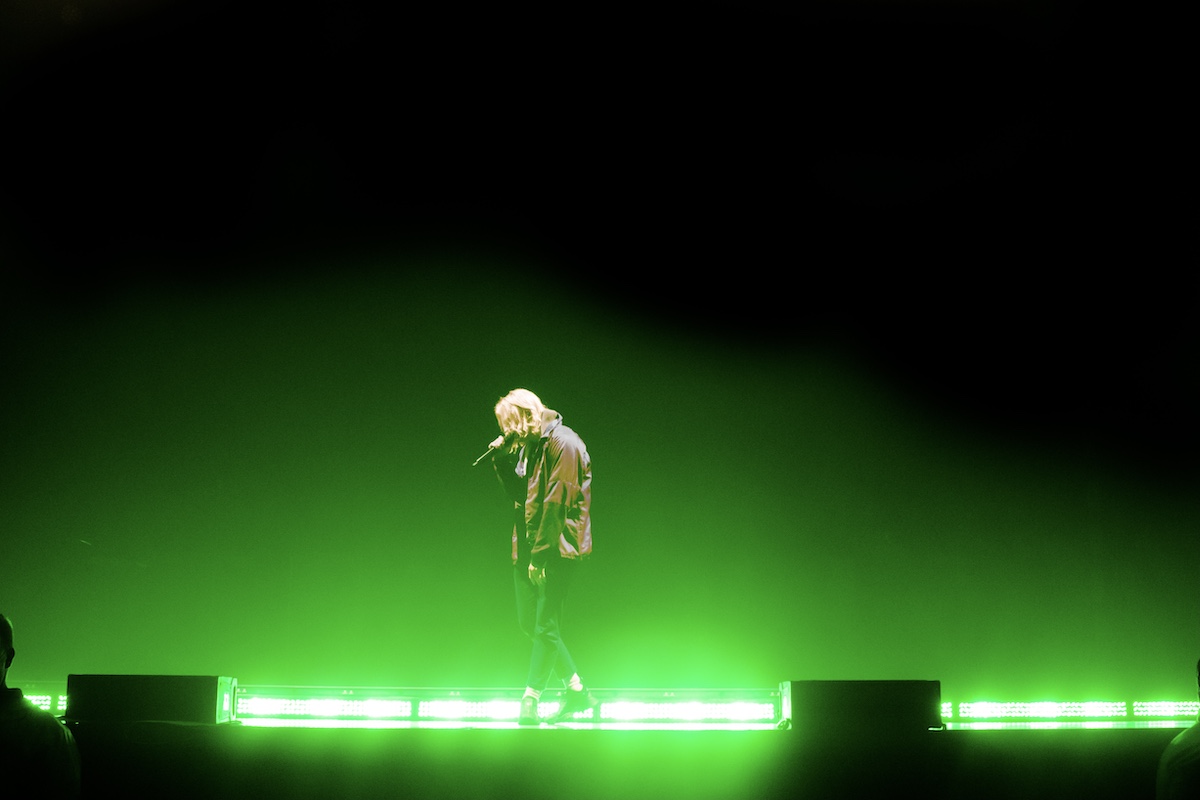 As the electronic music scene has shifted from the bass-overloaded dubstep era of the early 2010s to the more synth-pop-y sound of today, one name has consistently been at its forefront nearly the entire time. Having long shaken off the “rising star” label that was seemingly bestowed upon him for years, Porter Robinson has certainly established himself as one of the pre-eminent faces of the genre, proudly standing tall with the likes of such names as Zedd and deadmau5.

This was well evidenced by the turnout at Navy Pier Oct. 9, as the nearly sold-out crowd was well attuned to the wide scope of Porter’s discography. Whether raving to the eclectic sounds from Spitfire or passionately belting out the words to his most recent hits from Nurture, everyone was united by the fact that, after the nightmare the past year and a half has been, we were standing shoulder to shoulder watching the Porter Robinson perform. Live. In person. No livestream, no anonymous profile spamming the chat. It was a sight that brought out the inner child in all of us, including Porter, as he put on a show that Chicago will cherish for years t https://wnur-transfer.soc.northwestern.edu/wp-admin/edit.php o come.

The opening run for Robinson’s set was honestly one of the best I’ve witnessed in a long time, and would have easily been enough to send everyone home happy after only 20 minutes. He kicked things off with the second single from Nurture (2021), “Something Comforting.” From the jump, he was a ball of energy, as he ran across the stage and got everybody in the building to match his level. As the 20 foot tall LED screen flashed along with the dazzling light display, you could immediately gauge that he didn’t plan on making this night a slow burn, his intention was to take the crowd to 10 from the top and keep them there. “Everybody fucking jump” was the mantra that Robinson repeated song after song, and we had no choice but to happily oblige. How couldn’t we? Just listen to the beat drop on this song and you’re sure to squinch your face at its filthiness (in the absolutely best way possible).

Afterwards came another single from Nurture, “Look at the Sky,” one of my favorite cuts from the new album. Lyrically, we see Robinson at a level of emotion that, combined with his sheer optimism, will leave you somewhere in between tears of sadness and tears of joy. It’s a very catchy song that will instantly get stuck in your head, evidenced by the fact that not a single person around me wasn’t screaming “Look at the sky I’m still here / I’ll be alive next year” at the top of their lungs. Worn out from “Look at the Sky”? Robinson could care less, as he went straight into perhaps his magnum opus and, in my opinion, one of the best songs of the 2010s: “Shelter.” Starting with a stripped down piano version of the opening verse before transitioning to the banging percussion and sharp synths that we all know and love, he largely turned it over to the crowd to sing the lyrics, and it was truly deafening. There was just something so nostalgic about singing “It’s a long way forward, trust in me / I’ll give you shelter like you’ve done for me” with thousands of strangers that made me feel an odd sense of warmth and familiarity; it was definitely a highlight of the show and probably my year.

Once the next song, “Mirrors,” wrapped up, Robinson pulled out his beatpad, walked to the front of the stage and cut the lights save for one spotlight. He tapped one of the pads, and as a singular note played, the entire crowd collectively lost their minds: we knew exactly what was coming. He tapped the pad two times, three times, four times, and the anticipation crescendoed after each and every one. The guy behind me kept yelling “don’t do it Porter don’t do it” as if he were about to unleash something sinister, but nothing sinister was afoot at all. Just the smash hit from 2014’s Worlds: “Sad Machine.” As the intro played, everyone raised a hand in the air and mimicked Robinson as he tapped away like a world class pianist performing Beethoven’s 2nd symphony. It was a sight to behold, and I was honestly in awe the entire time. We were barely 20 minutes in, and we had already been treated to one genre-defining classic after another.

What was in store for the next hour or so was a mix of tracks from Robinson’s vast discography, mostly consisting of material from his latest album Nurture, which marked a triumphant return after a seven-year hiatus following Worlds. As Robinson is at a point where he doesn’t need to drop a new project every six months, he took his time to craft something that not only the fans would enjoy, but that he would find personally meaningful and reflective of the life journey his career has taken him on. This was readily apparent in the pure joy he displayed while on stage, it was like a kid living out his fantasy of being a rockstar, performing in front of thousands of screaming fans around the world. He beamed after the crowd’s reaction to every song, taking the time to thank everyone for appreciating his art. He rolled around on the floor during “Musician,” dropped to his knees during “Divinity,” jumped with the crowd during “Flicker” and demonstrated his trademark “not too cool to have fun” style that has defined his career. This concert especially meant a lot to him, as his parents, brother and girlfriend were in attendance, so he made sure to give us a show that we’d remember.