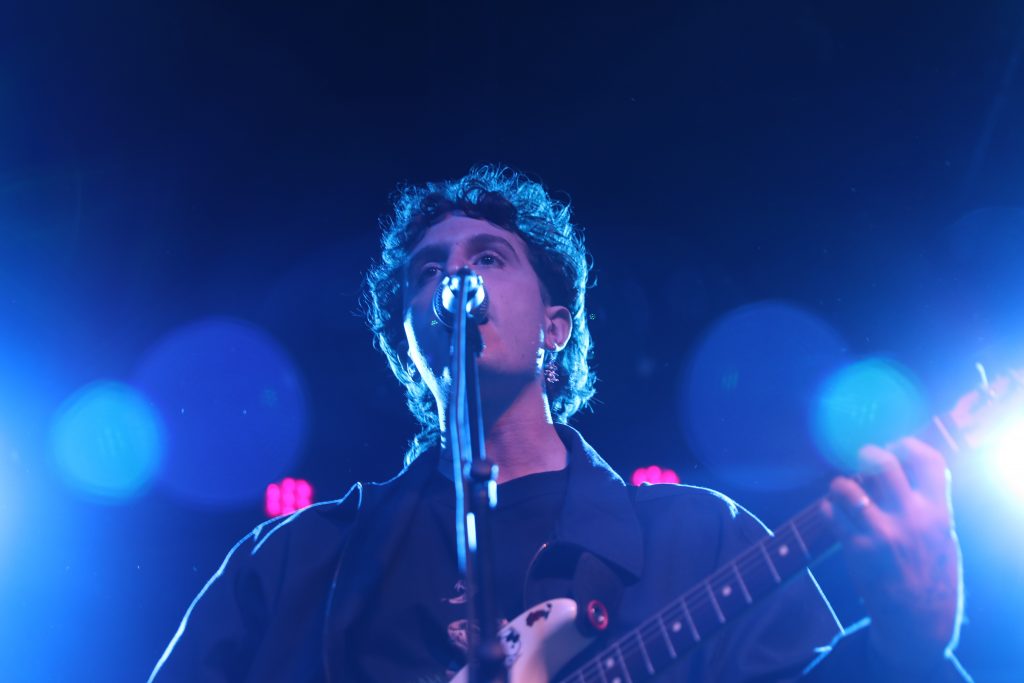 Brooklynites Beach Fossils may be considered the pioneers of bedroom pop, but after the critical success of 2017’s Somersault, the band has reached new heights that are difficult to confine.

The last stop on their co-headlining east coast tour with Wavves and opener Kevin Krauter brought them to Chicago’s Bottom Lounge for two nights. Before Wednesday’s show, WNUR got the chance to catch up with Beach Fossils about touring in Asia, the indie music scene and what Post Malone really smells like.

Beach Fossils had its genesis with the self-titled solo project of lead singer Dustin Payseur in 2010 and eventually added touring members, most notably Zachary Cole Smith, who eventually left to form DIIV. Clash the Truth was released in 2013 after bassist Jack Doyle Smith and guitarist Tommy Davidson joined, but it was not until Somersault that the Contemporary Beach Fossils Experience (as put by Payseur) was born.

“Writing with other people definitely changes stuff up rather than just writing by myself because we all have a different style,” Payseur said. “I don’t think that what we make together would sound like any of us by ourselves.”

Although their mellow, synthy sound and ocean-related name seems to lend itself more to LA than their native New York, Payseur likes to think of their sound as an antithesis to the hectic nature of the city.

“There are certain artists with a very New York sound that’s noisy and abrasive like the sound of the city,” Payseur said. “For me, making Beach Fossils sound pleasant was almost escapism from living in New York.”

Last year’s Somersault was the first of their albums to be released on Bayonet Records, a label started by Payseur and his wife. Payseur said that releasing on his own label was a natural step, adding to the DIY quality that Beach Fossils’ music has had since Payseur recorded their first album in his bedroom.

It is this DIY approach that has inspired a slew of artists in the increasingly present bedroom pop genre. Payseur said that its rise has allowed for a lot more variety within the industry.

“I just love that anyone who owns a computer now essentially has their own recording studio,” Payseur said. “The cheaper equipment gets, the more creative people have access to the medium. Making music shouldn’t be an exclusive thing.”

Although Beach Fossils started out in a bedroom, their range has since expanded worldwide. Last spring took the band on tour in Asia, where they experienced an entirely different culture surrounding their music.

“[In Asia] they’re very adamant about wanting to meet you,” Davidson said. “They’re very patient and enthusiastic, but a very reserved audience.”

“They’re extremely appreciative in a very different way than they are in the U.S.,” Payseur added. “It’s a little nerve-wracking because we’re used to playing for crowds that go crazy, but they are very silent. They’re really paying attention.”

This observation has affected the way that the band performs now.

“It made us kind of change our live game a little bit,” Smith said. “Now, we have a little bit less dead air in between songs.” 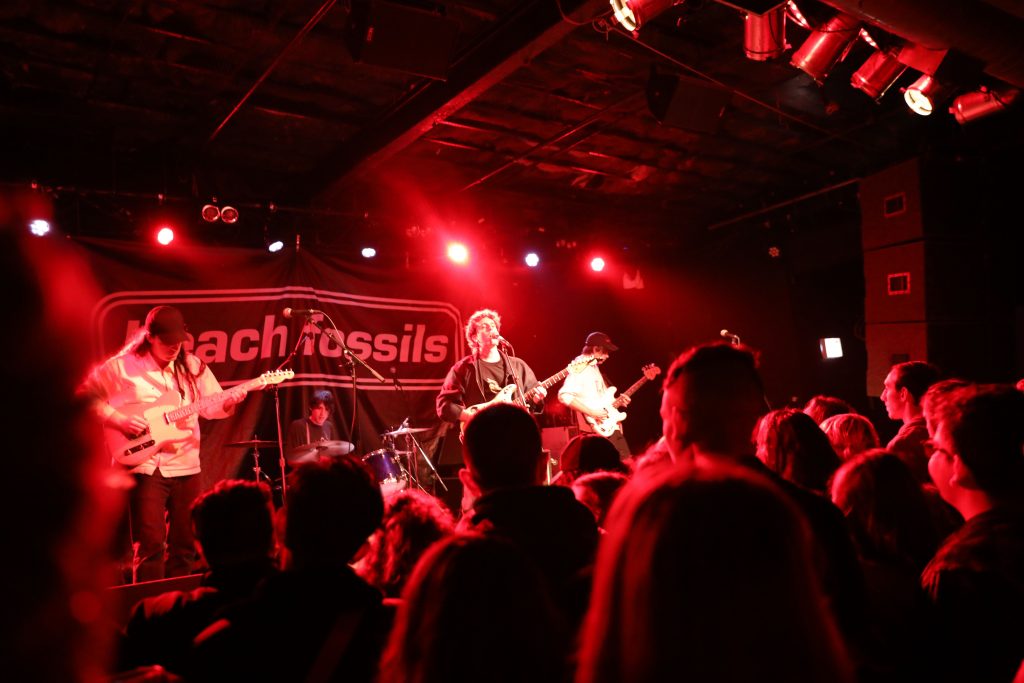 This turned out to be true. Beach Fossils played a 15-song set in pretty much 45 minutes. After an SNL-style introduction of each member, there was not much talking in-between songs except for the occasional exaggerated “Ohhh yeah,” from Payseur. The fast pace of their set lent itself beautifully to the crowd’s bouncy moshing against their lo-fi yet guitar-driven sound. Eventually, crowd surfers emerged, with Payseur himself joining in during “Generational Synthetic.”

However, the highlight of their set was toward the end, when Payseur traded the venue lighting for the crowd’s phone flashlights during an intimate performance of “Sleep Apnea.” Although most people’s phones were in the air not to provide light but to record the song (as I admittedly did), it was a moment that brought together a few hundred strangers. 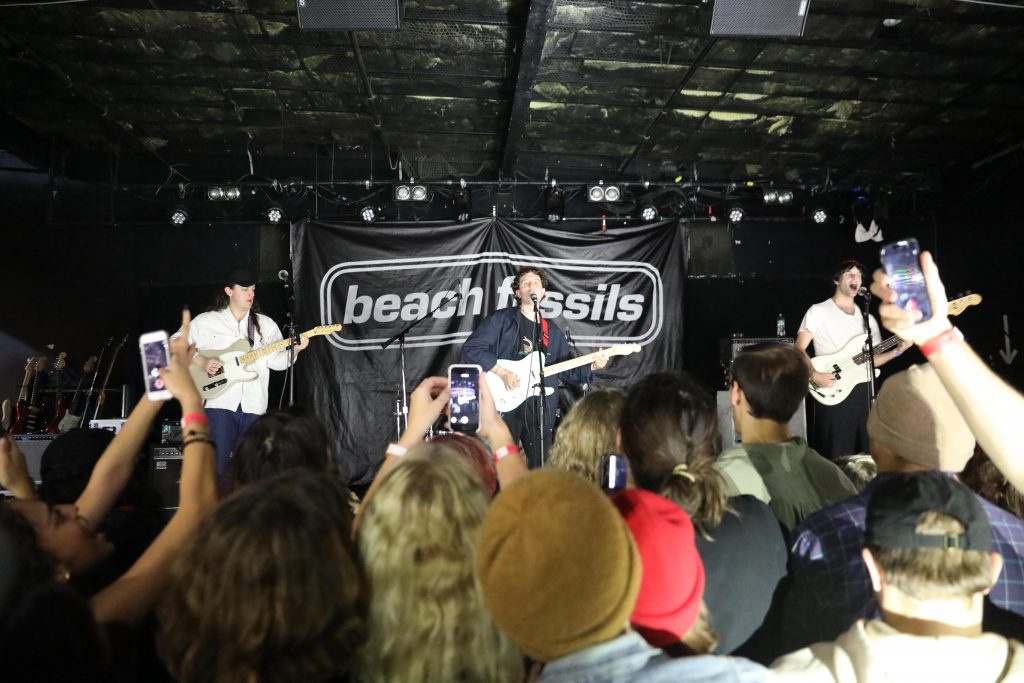 For the encore, Davidson asked the crowd if they wanted to hear a bop or a banger. The response was unintelligible, but when the band launched into “This Year,” everyone was content. “Careless” followed, and then they played Oasis’s “Wonderwall.” Like, for real. Normally, this decision would make me cringe to no end. But honestly, it was kind of heartwarming. Beach Fossils called out members of Wavves and Kevin Krauter’s band, which resulted in about 15 people on stage, playing each other’s instruments and belting that famous hook. Even though that many people gave the impression of musical cacophony, the cover actually sounded pretty good.

Although it may seem out of place for a band of their caliber to play a cover for their last song, Payseur finds them overlooked in the music world. In fact, he just released a cover of Yung Lean’s “Agony,” paired with a music video he filmed while walking the streets of New York.

Yung Lean is not the only rapper the group has been associated with – there are rumors of a collab in the works with none other than Post Malone. Although this was neither confirmed nor denied in the interview, the band was extremely enthusiastic about their love for “Posty.” 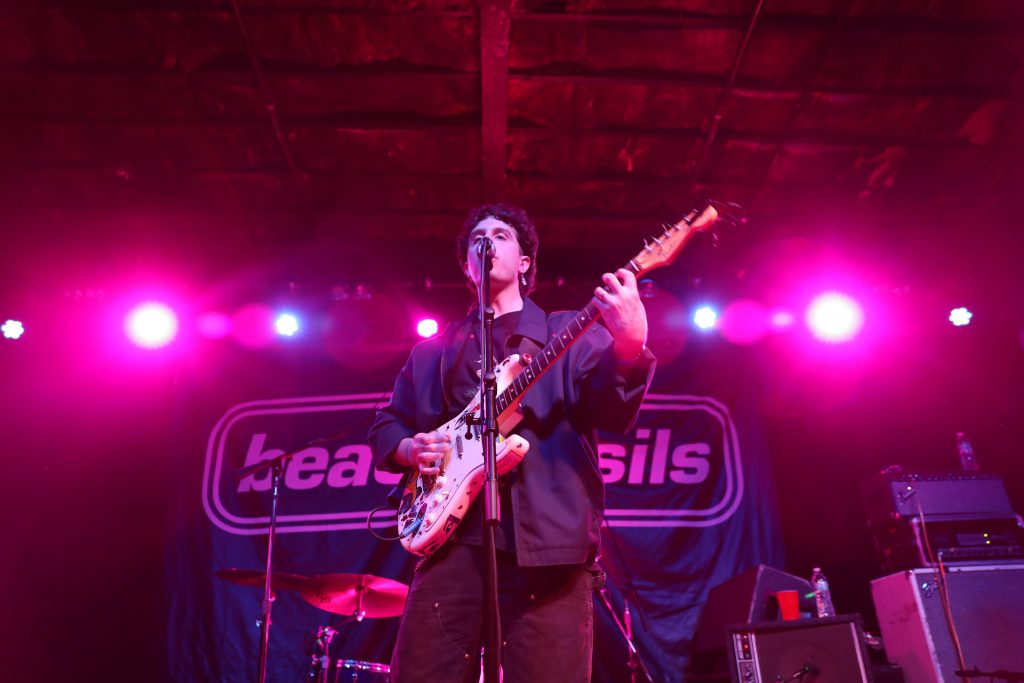 “Right after Stoney came out, I was watching Youtube interviews with [Post Malone] and I was like, this dude is hilarious. He just reminds me of people that we hang out with and ourselves,” Payseur said. “So I hit him up on Twitter and he DMed me his phone number. When we went to LA, we went to his studio and hung out for a week.”

Smith then addressed something that had been at the forefront of my mind: what does Post Malone actually smell like?

“People say he smells bad and I’m like, ‘Dude, he smells so good,’” Smith said. “He’s a millionaire, do you really think he smells bad?”

“He smells like leather,” Payseur added. “He’s fresh as fuck.”

Payseur and Davidson think that the indie genre could actually learn a little bit from contemporary hip-hop artists such as Post Malone.

“I feel like the cultural renaissance in hip-hop right now is embracing much more variety than indie music is,” Davidson said.

“[Indie music] is just become a little stagnant,” Payseur added. “Breaking down barriers in genre is essential, because indie’s not a genre – it just means that you’re releasing something independent of a major label.”

When asked if there is a new album on the horizon, Payseur replied, “We’re always recording. If we’re in New York, we’re recording, whether it’s for an album or whatever. It’s just what we do when we hang out.”

“We’re either at a diner or recording,” Smith clarified, which spurred a debate on the best diners in New York and Los Angeles.

After a six-minute digression, the band agreed that the best diners are Court Square Diner and Champs Diner in New York, along with Fred 62 and Cafe 50s in LA.

Of the milkshakes at Cafe 50s, Payseur said, “Those are fucking flames.” And then, after a pause: “Sorry, we’re way more passionate about diners than anything.” 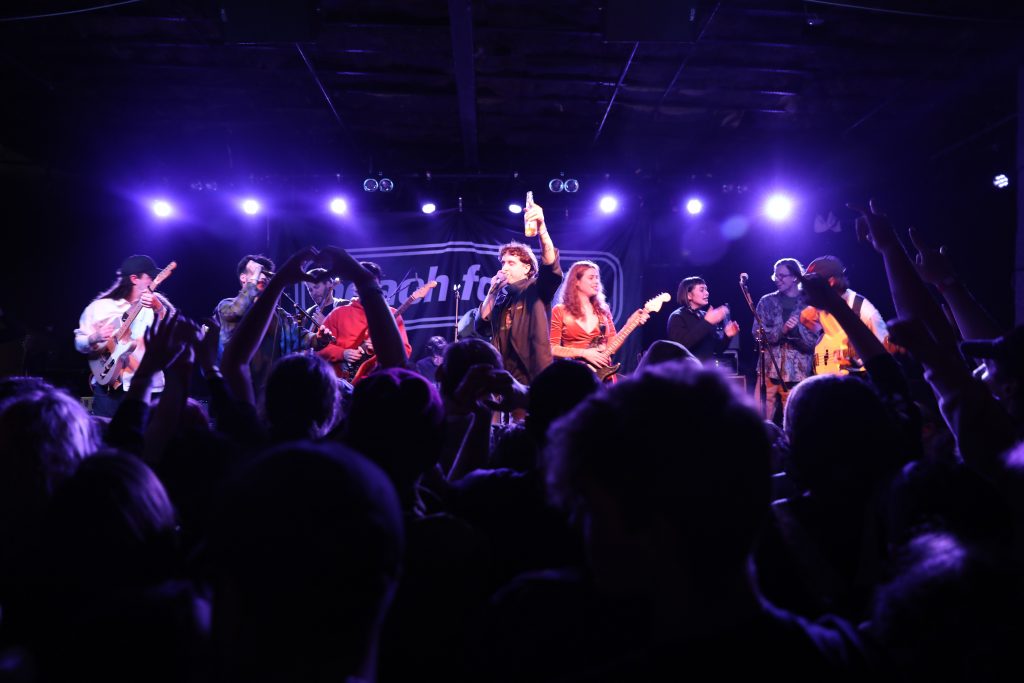 Although they were strangely passionate about diners (and Post Malone’s leathery scent), I’d say that Beach Fossils are at least equally as passionate about their music. With a solidified lineup, captivating live show and a hunger for innovation, they have definitely outgrown the bedroom. Now, they’re ready to take over the entire house.