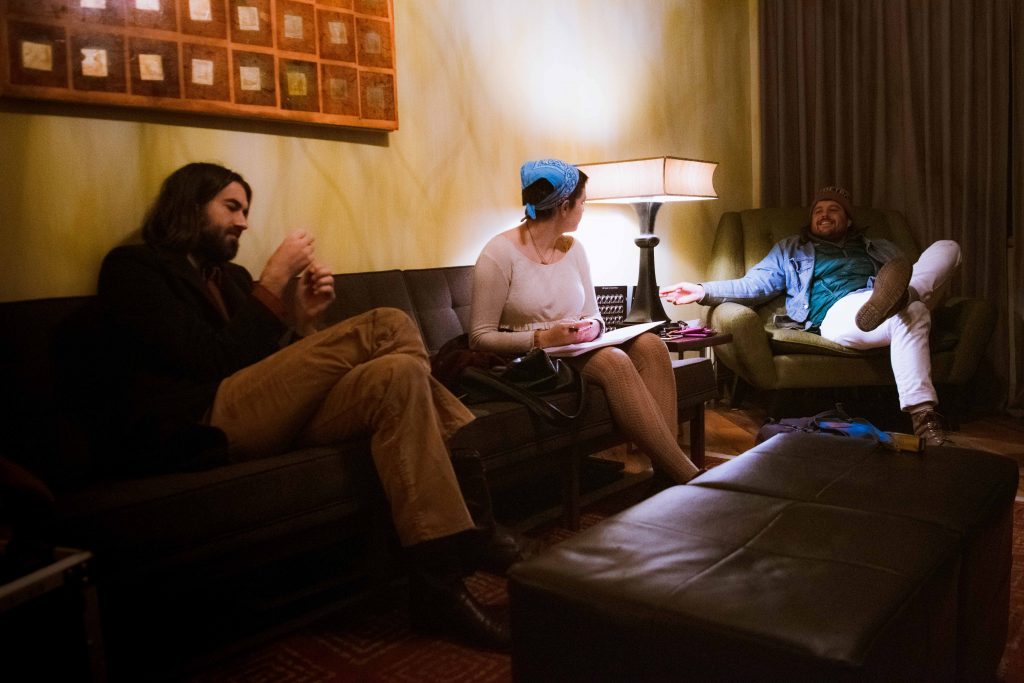 We were just talking about the record y’all just put out, and the kind of tedious recording process…

Houle: Yeah, it was…tedious on our own parts, as well. We put a lot of pressure on ourselves to make it the best it could be.

Delaware: (On recording Iowa City’s Magic Barn) It was something I’d always wanted to do my whole life, I know Clay wanted to that too, you know…When you have artists you’ve looked up to your whole life that are recording on gear that makes their shit just sound professional…It’s inspiring, it makes you want to do that. And we’ve been recording, you know, through interfaces and computers in… just studios that most people wouldn’t really know of. This was a studio that, I think, is gonna be famous someday. And…David Bowie recorded his last two albums on all this gear, I think it’s good enough for us… We were lucky to land the opportunity.

How was working with the whole team [at Magic Barn]?

Delaware: It was a… self-produced album, we had our friend Wolfgang Zimmerman help out a little bit , but mostly of the work was us and the engineers putting it together to make it sound the way the album does…I’ve helped record other people and produce in the past, Clay [Houle] has been in other projects…where he had a lot to do with the art…It’s fun, when you make songs, You kinda can hear the production already and it was an easy thing.

Houle: That’s really true, once you’re writing it, you have a vision in your head of what you want it to sound like.

Yeah, and y’all keep it pretty organic in terms of production.

Delaware: We put as many roto-toms on this as we could

Houle: If we had some, I’m sure we would’ve, like we do have some 80s elements, but we try to keep those down in the mix. 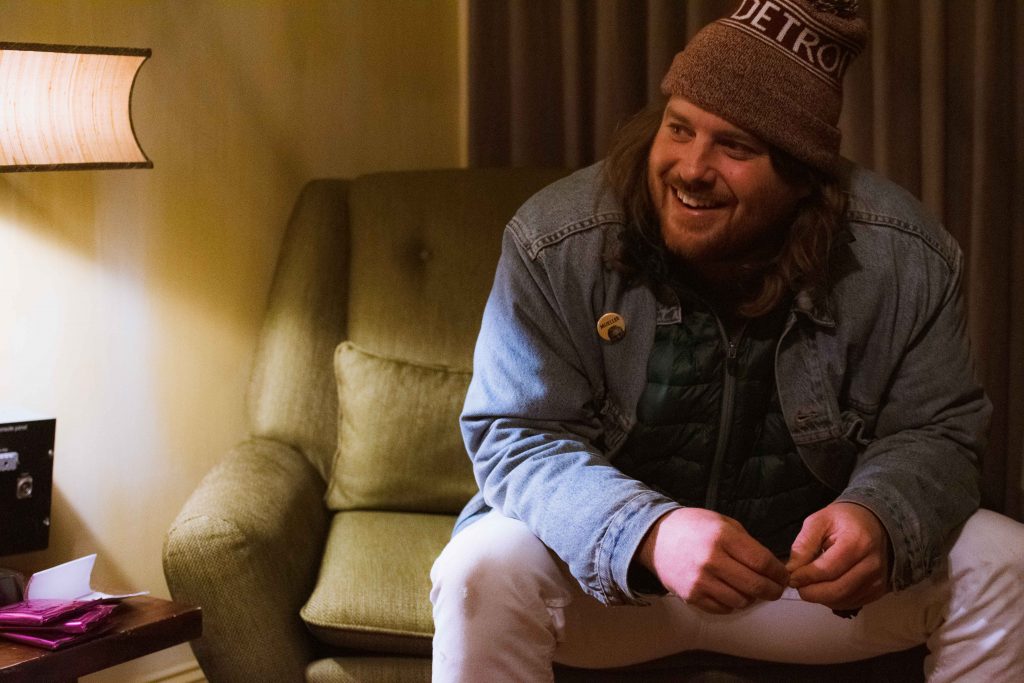 The sheer diversity in your instrumentation was really interesting. What makes you choose all those different elements?

Delaware: Yeah, all the exotic instruments… I’ve always loved Indian music–I guess I haven’t always loved it, it’s been a thing in the last couple of years…There’s guys like Christian Adas, there’s exotic instruments over there that I can’t even pronounce the artists so I’m not even gonna give it a go. It’s something beyond what I’ve heard here in America and it was just really cool to put, like, any touches of that into our Americanized songs. It’s different, too. We could have gone a lot further with it but it’s just really hard to track down those instruments. The koto thing was really cool That happened to, like, land in our lap because one of the engineers had a friend who had a koto that was only like an hour away so he ran to the studio And then our co-producer, his friend plays the sitar really well… and he created a nice intro

Houle: A lot of those world instruments, maybe it’ll be because we’re writing some of our stuff on Garage Band So we’ll have all these different instrument patches and stuff, and we’ll play with some of that. We really didn’t know what the sitar was gonna sound like, but then we heard it and it was like, “Wow–holy shit, that sounds cool”

Delaware: He sent over two different tracks of them and he harmonized the parts. Once we blended them and put the effects on that were needed..it sounds awesome.

That’s one of the things that stuck out to me about your album, it blends a lot of different stuff. Because everyone’s going electronic, I love talking to people about organic stuff.

Delaware: I love it too. Those guys out of Atlanta that did like at the R&B, hip-hop stuff in the 90s for TLC and [Organized Noize] that was what was so cool about those guys, they were creating music that was usually made by machines and doing it with like, actually bass guitars and real guitars and that’s why it’s so different. Everything’s kinda become a bit more synthetic, nowadays.

Houle: And it’s weird, like if you ask us the kind of music we listen to… We gravitate more towards more organic sounding stuff.

Delaware: You create the song first, then when you’re doing overdubs, like for the song “First Time” the demo version has a really Chinese sounding guitar that Clay played…And we were like: “yeah that sounds great” The koto happened out of nowhere, so that kind of took place over …the style of guitar that Clay played, that guitar part. There’s bands that have kinda done that lately, it is the future, all these cultures are gonna unite…In like five hundred years If we’re still on this rock hanging out… culture and tradition are just gonna be one, or two, or three things. 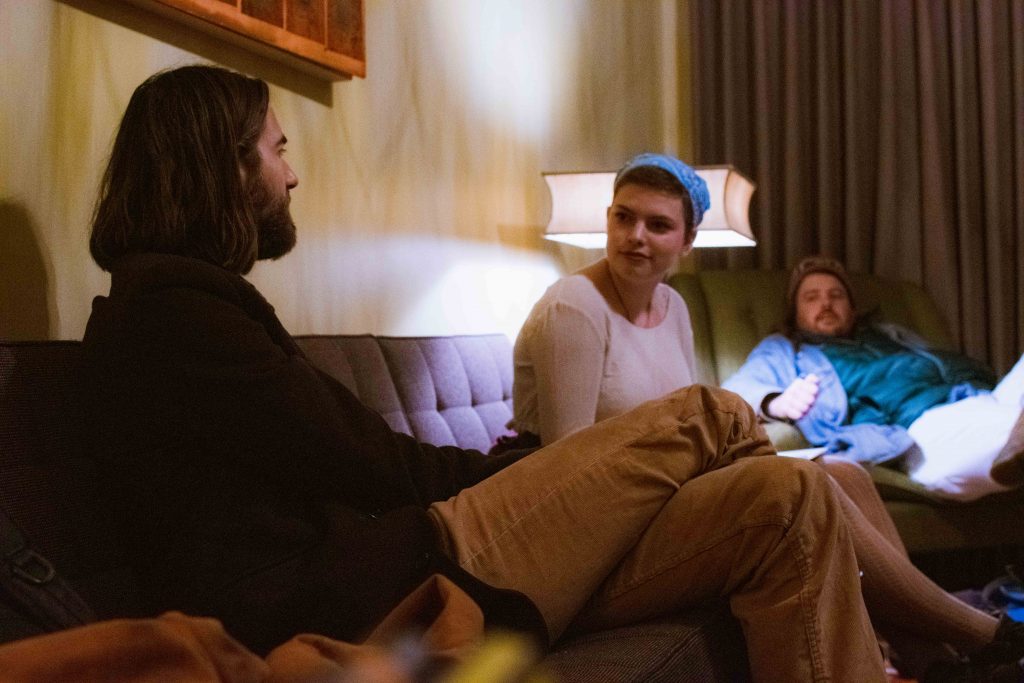 Getting back to the tour a bit, how does playing so much affect your relationship to your music?

Houle: Your relationship can get affected–like with a song you play repetitively, maybe you lose your love for it a little bit…Some of the songs we’ll play, we haven’t even recorded, we’ve been playing them for like six months. You just have to remember how you felt when you wrote them.

Delaware:It can get a little pedestrian, playing them over and over…We’ll do like 130 shows this year, an we took time off…It’s interesting, you gotta dig deep and remember how it was when you wrote it.

Houle: Sometimes you’ll write a song and you’ll be like “This is my favorite song” and as the year goes by maybe [your favorite] is a different one you wrote in the same period.

So thinking about the future, what’re you guys doing to move forward as a band?

Delaware: We plan for the future, we keep pounding the rock. It’s like the Spurs…that’s what their coach [Gregg Popovich] says…Perspective is huge, too in life…We’re worried about our goal, and not making it–

Houle: We’re just bitching about, you know, enough people don’t like our band…There’s so much more important shit.

Delaware: It’s about getting your head out of your ass (Houle laughs). You move forward, and you keep doing what you love 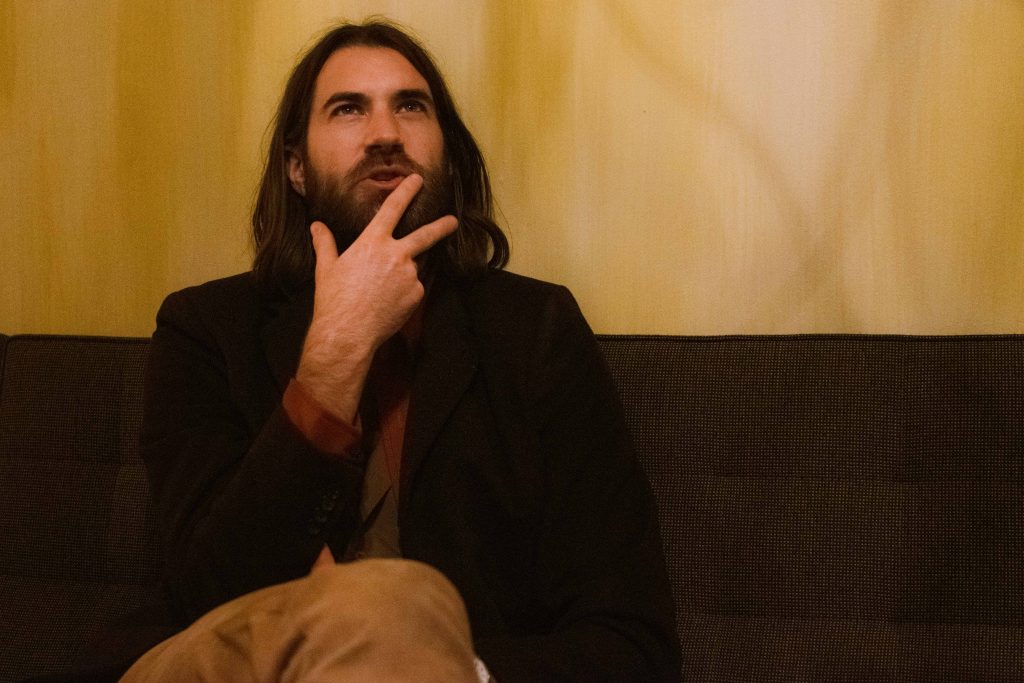 So to get back to the new record, what are y’all listening to and pulling from?

Delaware: I’m excited to do a completely different mix for this next album…I’m excited to get down to the heartland rock thing, but to do it in a classy way…It was really big drums, and we were into that at the time but now we’re ready to go back even further, 70s instead of the 80s.

Houle: Yeah, 70s and even the Americana of the 90s, it just sounds really real. It’s not overproduced, it’s all about the song writing.

Delaware: I want it to feel like it’s one or two takes, I don’t want it to feel overprocessed…I want it to feel human, I want there to be mistakes, blemishes all over. Some of my favorite records…there’s mistakes all over them, but you never notice…like the bass isn’t even hitting the right note. We’ll immediately get insecure if that happens, like: “we gotta cut that” but I don’t think we should. Unless it’s really bad. You couldn’t have made a perfect record, back in the day. And now you can. I don’t think that’s human. The songs are telling a neat little story, about trying to escape your life and find something new to grow towards.

Any words on those greater themes?

Houle: [Delaware] really got it. I mean we recorded that album almost two years ago. It’ll be nice to record again…to produce ourselves again and see what happens.

Delaware: Yeah it’ll be awesome to record again, it’s been too long.

Delaware: The only thing that hold us back is money, it’s expensive…We wanna have this new album out in 2019…it took so long to get our dots connected and get this first record out, so now it’s just like: ‘Let’s get going’.

Houle: And all of our favorite artists are putting out music… Unfortunately, in our day and age, it’s more about ‘let’s keep people’s attention’. It’s so true.

Delaware: It’s neat because back in the day they managed to put out so many records anyway,too because that was a way to make a living…The Beatles and The Stones were putting out like–what, two to three a year? Yeah, we can go back and do that again.

Who are y’all listening to nowadays?

Houle: A lot of His Golden Messenger, Bob Dylan, Bruce Springsteen, Tom Petty, Israel Nash… Did I say His Golden? 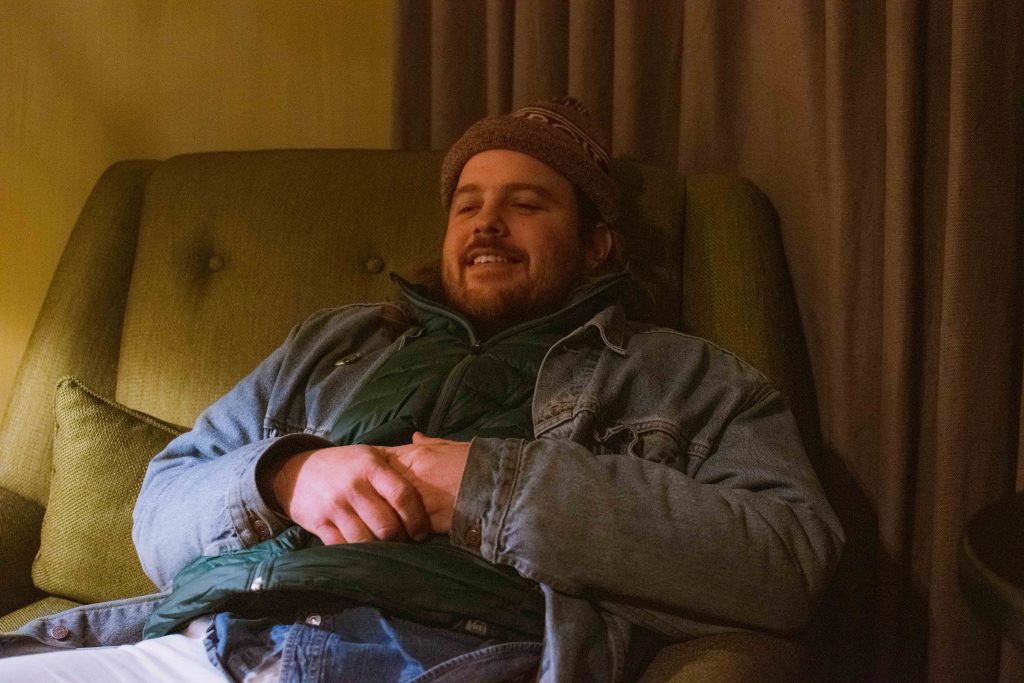 And are you guys really in touch with the southern music scene?

Houle: Well I’d say we are, because that’s where our band started. We knew a lot of venues in the south…Athens, Charleston…